Scooter update and a new purchase

On Sunday 24th July 2009 Shelly and I will be flying off to Germany for three months of random travels across Europe. Needless to say there won't be much to report here on the scooter restoration front. I do hope to visit a few scooter and motorcycle museum on the trip and I'll try and post some pics if I can. We shall see. For anyone interested, here is a link to our blog:
http://paulymx4.travellerspoint.com/

So, here's a wrap up of the Scooter situation....

The Troll is still broken down. I'm fairly confident that the rings have gone. I've found a source for pistons and rings but won't order until I have the confirmation of the damage. Ivo is going to pick up the Troll in the next week or so.

In the meantime I've been riding the Vespa - although not very often as it's been pouring with rain here in Perth. The Vespa feels very uncomfortable after riding the Troll. It really is only suitable for short rides. It doesn't have any guts, acceleration is poor and second gear is hopeless. I think a total rebuild of the engine and clutch is called for but I really don't want to spend any more money on it right now, especially as there will be a bill coming for the Troll.

The Heinkel is still parked in my shed. I haven't done anything more on it since I got the parts from the Heinkel Club and it doesn't look like much more is gonna happen this year. Partly, this is because I ended deciding the spend the 'Heinkel restoration fund' on an Ariel Leader. As I have mentioned before, I made some enquiries about the Ariel Leader earlier in the year. I wasn't especially serious at the time but things just took on a life of their own. I don't remember actually committing to buy the bike, but the seller became convinced that I was the guy he wanted to sell it to. About three weeks after I'd made my first enquiry the seller, Barry, called me out of the blue to advise that someone else had been around to visit him and was interested in the bike, but he told them firmly that he was selling it to a guy in Perth - me. I was a little surprised and told him that I didn't have the money (I didn't - I bills coming out of my a*se!) but he was okay with that. I could just pay him a bit at time, whenever I had some spare cash. Time and money were not an issue. After I had had time to think this over I decided - why not!? Opportunities like this don't come along often. So I paid him off over a couple of months. On Friday I got a call from the transport company - the bike is in Perth and ready for collection. Unfortunately I won't be around to pick it up, but my brother will kindly take care of that for me. The bike has been in storage for 10-15 years, but it was test run before it was sold. I've heard the engine running - it sounds rough, but what do you expect. It's almost road worthy, needing only new tyres, brake light and a new battery (and a tune up won't go astray!) 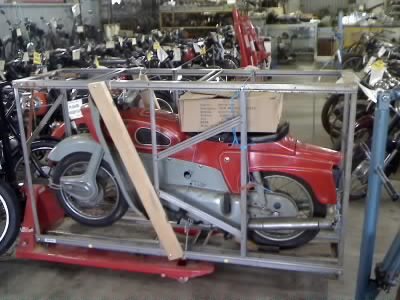 Posted by Paul Markham at 9:57 PM No comments: