Vespa - Sito and the extra ten

After speaking with another VBB owner I decided I would spend a little time and money to improve the performance of my Vespa. As I didn't want to invest too much money I bought a second hand (but unused) Sito PX exhaust off ebay. The original VBB exhaust was a very simple affair and didn't really add to the performance of the scooter. Sito built larger bore exhausts that improved the gas flow through the engine. While this doesn't substantially increase performance in the same way as a racing exhaust would, it does offer an improvement without requiring changes to the carburettor or jets. 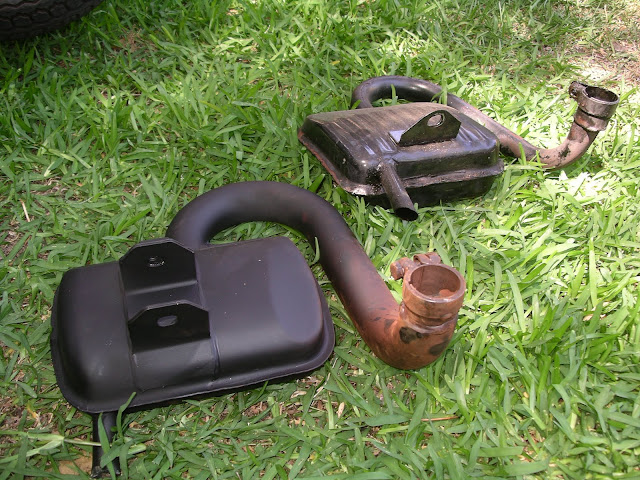 The new Sito exhaust is in front, the old VBB exhaust is at rear
Replacing the original exhaust is a very simple affair and the steps are described in detail here so I won't repeat the instructions: http://www.scooterhelp.com/tuning/sito.exhaust.html 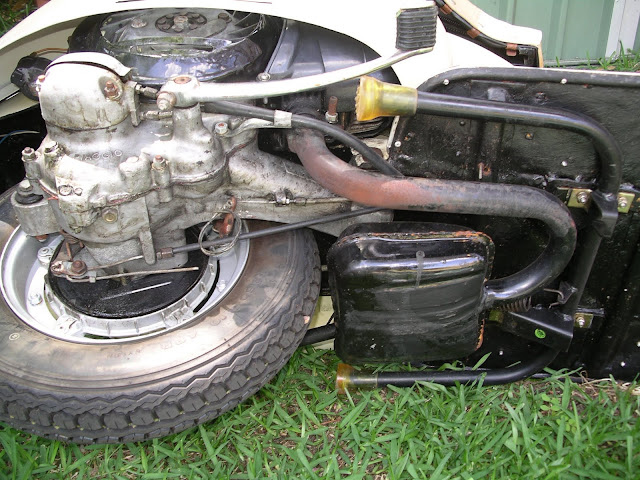 What I will say however is that it was a revealing exercise into the dodgy world of Asian scooter restorations. The exhaust itself came off quite easily but the bolt securing the exhaust to the frame was very difficult to remove. The restorers obviously did not have the correct size bolts to hand and so used a roofing bolt that was overlength and a little too thin. To make it fit they'd used about six washers of different sizes with bolts in front and behind the connection to keep it tight. They'd obviously installed the exhaust before the engine and swing arm were in the frame as they'd threaded it from front to back. This meant I couldn't extract without removing the whole engine as the bolt was butted up against the frame. Instead I chose the dodgy mechanic's method and just cut the through the bolt. 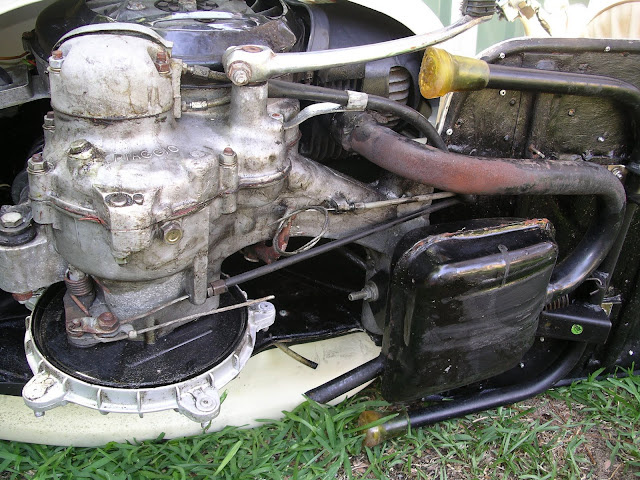 It is much easier to get at the securing bolts with the rear wheel off.


There were signs of poorly welded repairs around the bolt hole. Obviously someone had smashed the bolt (and exhaust) out of the swing arm and then re-welded the damaged hole so that a new bolt could be re-threaded. Nice. 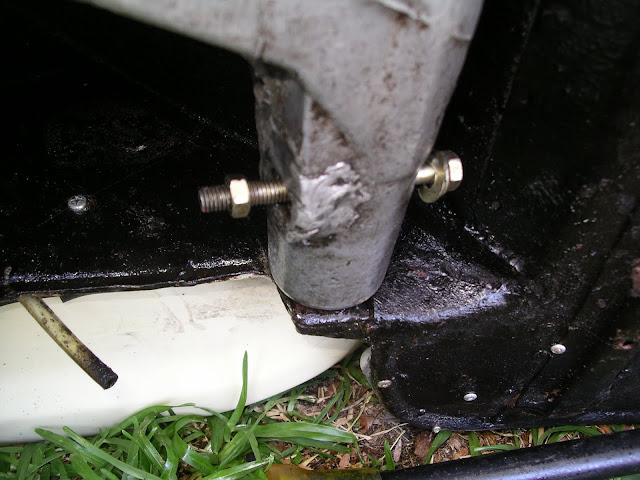 Dodgy bodges. A roofing bolt, the wrong size, threaded through from the front through a hole that has obviously been hacked about and re-welded. 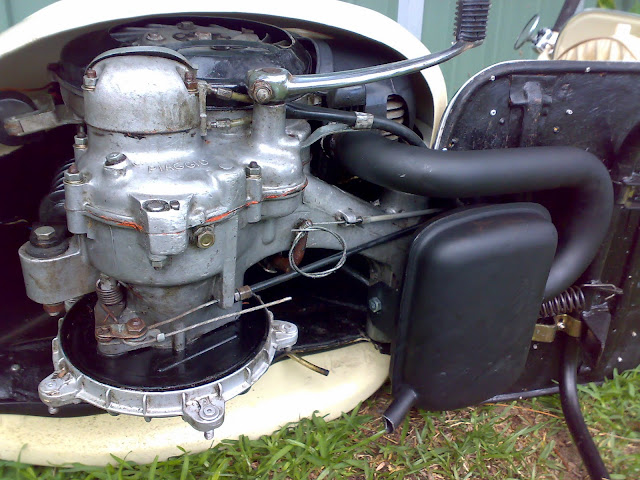 All in all, if it wasn't for the problems caused by the dodgy repairs, the whole job could have been completed in 15 minutes.

So, did it work? The first thing you notice is the Sito gives off a deeper tone than the tinny old exhaust. It did not really improve take off speed but as I worked up through the gears I found the old girl was able push on through past the 40, 50 and finally 60 kph barriers much easier than ever before. For a few minutes the needle even waivered towards an unheard of 70 kph so from my perspective this has been a very significant improvement.
Posted by Paul Markham at 5:13 PM 2 comments:

Email ThisBlogThis!Share to TwitterShare to FacebookShare to Pinterest
Labels: Vespa

It's been a challenging couple of weeks on the scooter front. After the Troll's poor showing on the Piaggio run I went over the carby, flushed the fuel system and installed a new petrol tap. The result was almost immediate and the Troll ran like a dream again. I took it on a couple of rides around Fremantle and around the river and actually began to think that everything was looking good. It wasn't too be though.

On the last Sunday of 2009 I joined an early morning ride organised by a couple of guys I used to work with. They were riding a Vespa PX and a Lambretta. It was a long route that took us from Fremantle, along Canning Highway into the city (the long by slow road), through to Kings Park overlooking the city and then down to the coast, turning south back to Fremantle and then along the river to Como. As it was starting early, I was running late. I missed the first rendevous at the Lucky Shag bar, then missed the second rendevous at Kings Park but was only about five minutes behind the pack. I headed straight for the coast aiming to cut them off at the pass but missed them again (little did I know I had actually overtaken them). But I didn't really mind. The Troll was running really well; the engine never skipped a beat, and I was enjoying myself immensely. After about an hour and half on the road I eventually reached Fremantle again and then, just as I pulled into the carpark outside Little Creatures brewery, the engine died. The others all then arrived, just in time to see me stalled at the side of the road. A couple of guys tried to give me a push start but she just wouldn't go. I walked her into the carpark. It was a stinking hot day and the consensus was vapor lock so we settled in, had a beer and waited. 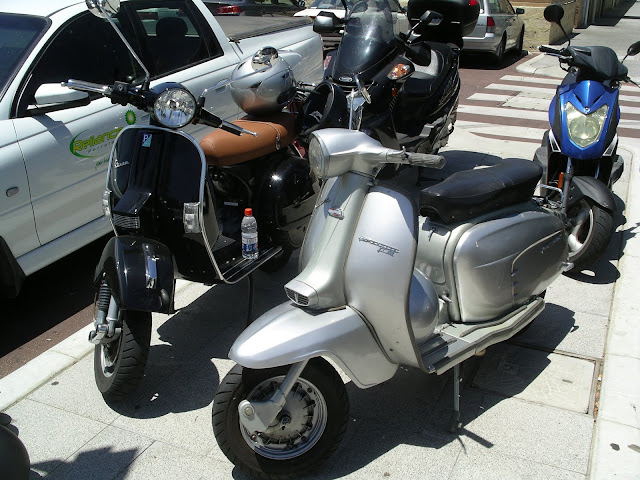 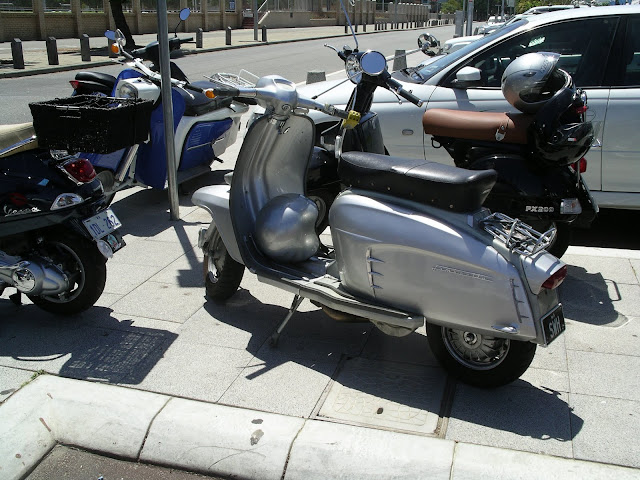 The waiting didn't do me any good though. The Troll resolutely refused to start. When the kickstarter broke it was kind of game over. I bid adieu to the guys and began pushing the Troll home. It was a hot day - 40c - and it took me 75 minutes to get her home. My enthusiasm for scooters was sorely tested that day. So the Troll is now out of action until I get the kickstart looked it.

So it was back to the Vespa again! Actually the Vespa has been very good to me. I hadn't used in so long that I'd forgotten what a pleasure it is to ride. Even after months without use it still turned over on the second or third kick. Over the past couple of weeks the Vespa has taken a bit of hammering. Then, I was riding it back from the hardware store last week when the back end went all soft on me and I started sliding all over the road. The rear tyre had blown. I was lucky to bring her safely to a stop, not least because it had been a very hot day and 'I'm only going up the shops' I was wearing only a T-shirt and shorts. Coming off would not have been pretty. So, again I ended up pushing a scooter. Fortunately I was only about 500metres from home.


This was the first tyre I've had to change on any of the bikes and I must say it was much easier than I had expected. Five bolts hold the tyre and rim to the wheel, which slips off easily. The spare simply bolts into place. It took only fifteen minutes. Here's a couple of shots of the patient. 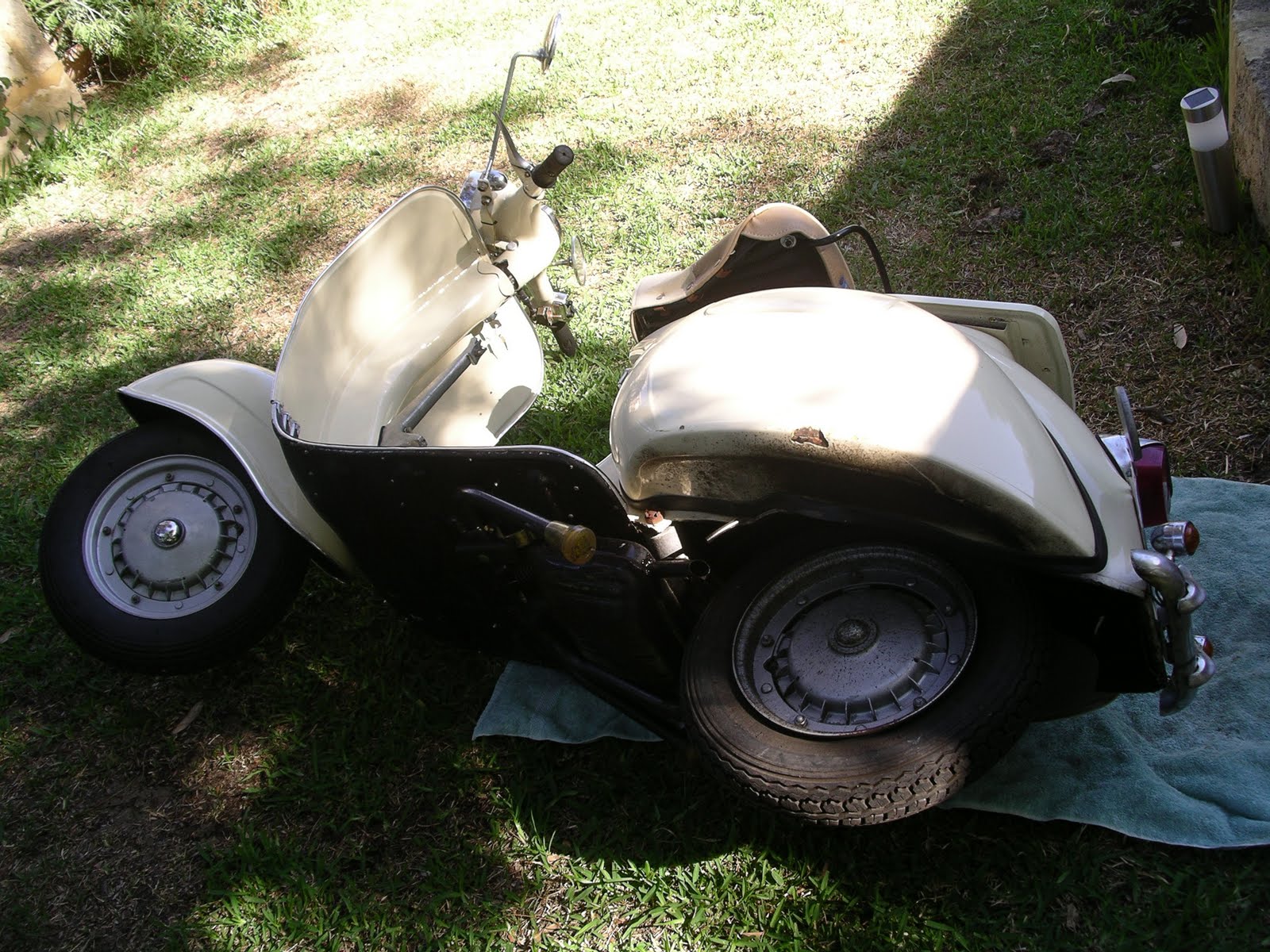 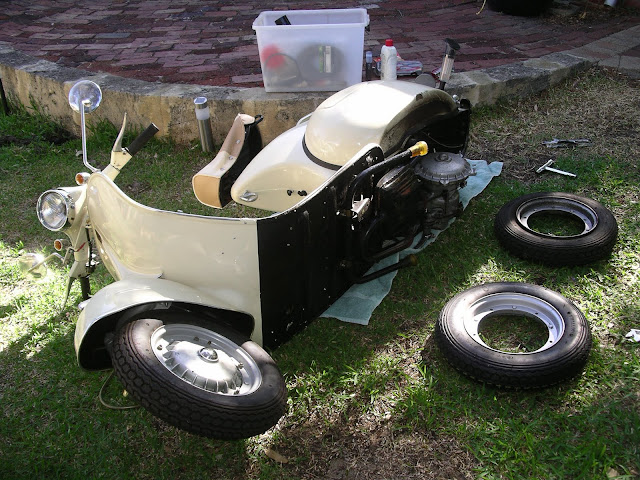 One comes off, the other goes on.

I've so enjoyed riding the Vespa lately that I've decided to make a few minor mods to improve her performance. I'll shortly be installing a Sito exhaust which should give her an extra couple of kilometres per hour. We'll see. I don't believe my speedo is anything like reliable. It barely registers 40kph when I'm hurtling along Canning Highway (speed limit 60kph) and cars aren't overtaking ... all the time. We will see.....

Posted by Paul Markham at 6:05 PM No comments:

Ariel - There was movement at the station... 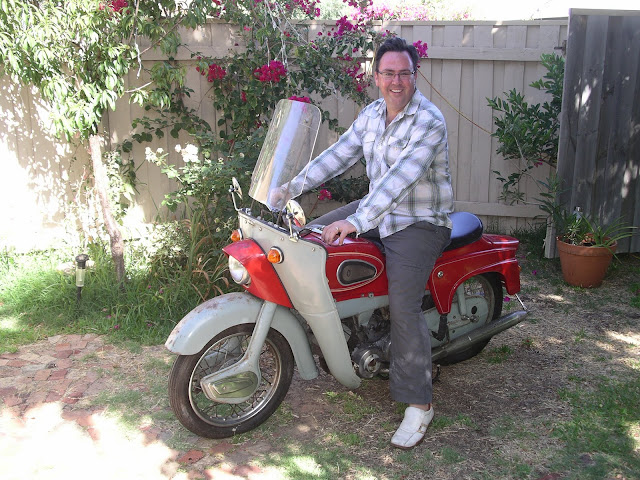 Progress on the Ariel has been slow but steady. I've been undertaking various little jobs on the bike as and when the parts trickle in. One of the questions I've been wrestling with has been whether to leave the bike 'as is' without indicators. Indicators weren't necessary back in 1958 and I can find no trace that she was ever fitted with a set (I can't find any trace that of brake lights either for that matter!). It's almost impossible to find the original Leader indicators and when they do show up on the market they fetch ridiculous prices. I had a set of BSA style indicators and, of all things, a set of rectangular Trabant indicators. At one point I thought about installing the Trabant indicators on the front shield, but they looked ridiculously angular and out of place. In the end I found a set of replica Lucas indicators from Auto Electric Supplies (http://www.autoelectricsupplies.co.uk/home). I installed them over the weekend and I think they really look the part. Now just waiting on an original indicator switch I managed to source from the UK. 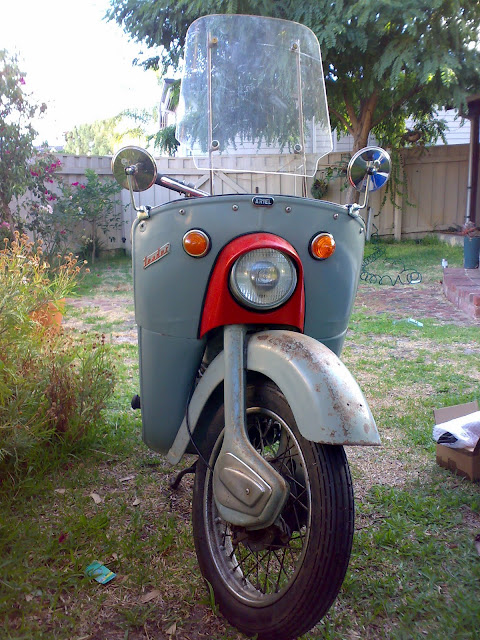 The engine has continued to run pretty well ever since I first got it ticking over. Not only that, but all the electrics proved to work fine as soon as a fully charged battery was installed, even the 'broken' horn sprung into life. But the clutch proved to be a problem. It was stuck and simply wouldn't budge. It took two weekends of fiddling around with the cables, soaking the gearbox in oil and finally propping up the bike and starting her in gear before the clutch finally began to loosen up. It still wasn't smooth by any means but by the third weekend had loosen up enough for me to try and move her under her own steam.

Outstanding jobs for me are: - finishing wiring up the indicators, installing the brake lights and replace the tyres. I want to replace all the cables; they do all work but feel a little bit slack. I also had some concerns about the quality of the brakes - Ariel brakes, especially the front brake, are notoriously weak - but testing the back brake on the ride it stopped the bike dead in its tracks. I'm still not convinced about re-painting. I think I might have the fender and grey side panels resprayed but I'm going to leave the rest of the bike alone.

An Update - The Ariel Goes to the Shop 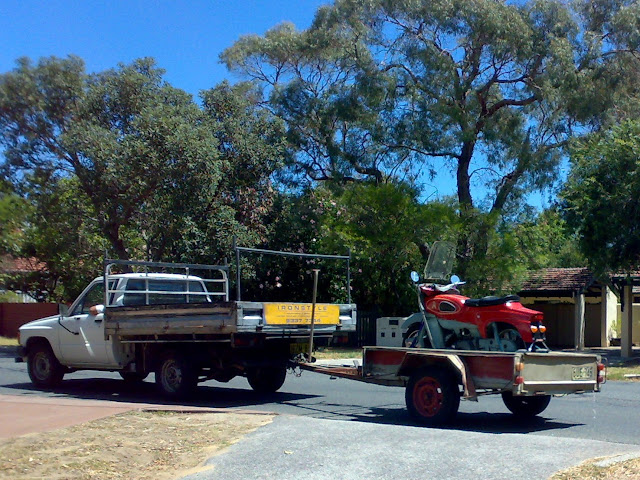 Ivo and Roberto picked up the Leader on Wednesday 15th February 2010. They're going to do the final bits and pieces - electrical wiring and check the brakes. I really prefer having the professionals work on those things as they are kind of life or death when you're on the road. As there isn't really much to do I'm hoping to have the bike licensed and on the road very soon. I can't wait.
Posted by Paul Markham at 11:23 PM 2 comments: