The fruits of summer

It's been ages since I've published anything on this blog. Partly it's because I've been busy but also because I start writing something, then things change and I go back and start re-editing. This time however I'm just going to publish and correct the out of date stuff with another post. Here goes:


The Troll
After sourcing most of the parts I needed I set about trying to carry out some of the repairs myself. As I reported last time, this had somewhat mixed results. At the end of the day I couldn't complete the rewiring, fix the accelerator or remove the rear brake cable (which had rusted right into the brake housing. Ivo and Roberto from the Vespa Shop had agreed to look the Troll over for me and assist so I ended up dropping it off to them. After they'd had an opportunity to give it the once over we caught up to discuss the next steps. I'd originally intended to just undertake the basic repairs on the Troll, to get it roadworthy but not restore it. After a lengthy discussion though we agreed that it will pretty much be a basic restoration, including a complete repaint. I'm quite excited. One of the things that prompted me to do this now was finding this German website detailing the restoration of a Troll and Berlin. I'm expecting my Troll to look just like this: http://emw340-2.com/


I've also been in contact with a guy - James - in the UK who is repairing a Troll. His site is:
http://www.trollscoot.co.uk/


Due to the Christmas and New Year breaks, when many businesses shut down for weeks, the Troll probably won't be ready before March 2009. I can hardly wait.


The Heinkel
The Heinkel is now resident in my new shed. I really didn't have room to store any of my scooters. The Vespa was always parked on the veranda at the front of the house - not an entirely secure location while the Heinkel and Troll were both wrapped up under tarps on my back porch, much to the delight of my wife. So, in the interests of domestic harmony it was essential that they be found an appropriate home. We had a small 2.5 by 2.5 metre shed in the corner of the garden. That had to go. As did a rather scrappy small tree. We now have a 4.3 metre long shed that can happily accommodate all three scooters and my kayak. Hurrah! That all said, unfortunately, I just haven't had the time yet to do anything with the Heinkel, but I am planning on starting work on it shortly. 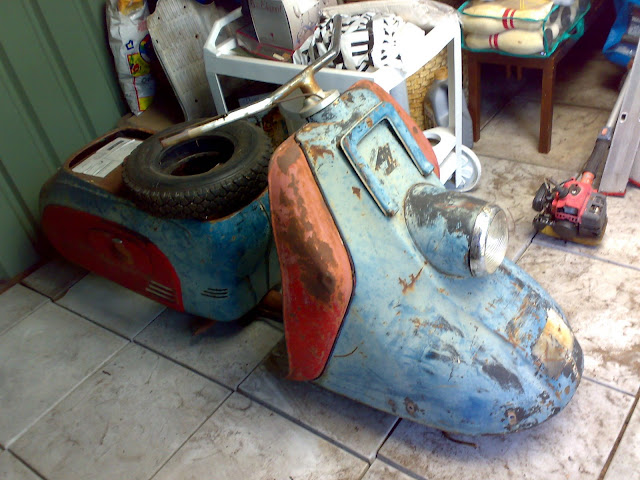 The Vespa
I hadn't ridden the Vespa much in the past couple of months, but after getting back from Melbourne in mid November I've taken it on a run every weekend. I took it into Fremantle a couple of Sundays ago and she rode like a dream. It felt great to finally get to use the scooter as I intended. Unfortunately, not having used it much over the preceding months I'd neglected to check exactly how much petrol was in the tank. I mean, hey, it's not like I'd used it much so it's gotta be pretty full, doesn't it? Funnily enough I was almost home when this thought crossed my mind and I thought perhaps I should take this opportunity to swing by the nearest petrol station. And with that thought the engine suddenly went "pop!" and I was dead in the water. Oops! I was only about a kilometre from home so it wasn't a biggie. Just a little embarrassing.


More embarrassing however was that I had to push the Vespa past a group of young ladies who were sitting on their front lawn, overlooking the river, and having a few drinks. They'd waved when I drove past them on my way to Freo so I felt a little humiliated now having to walk the bike past them. Sure enough they laughed and called out but were surprisingly sympathetic. "Looks like you could use a drink!", one of them called, and indeed I could. And I did. I ended up joining their little soiree for a few bottles of champagne so it didn't end too badly after all! But I now know exactly how far I can drive on one tank of petrol.
Posted by Paul Markham at 5:17 PM 1 comment: