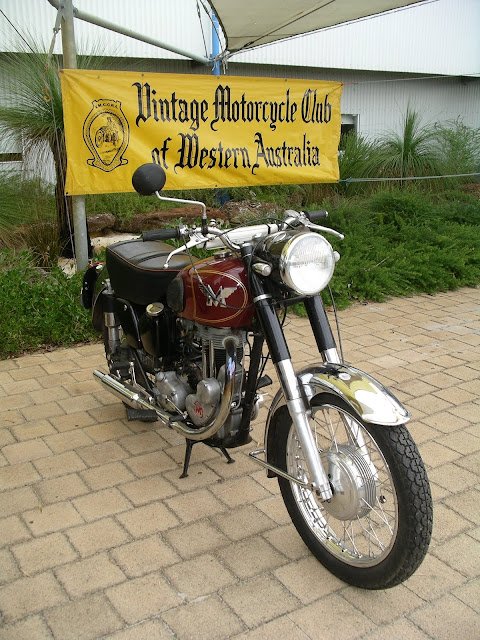 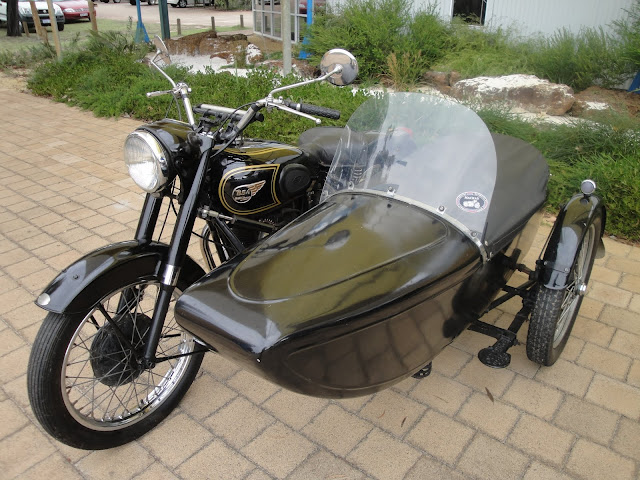 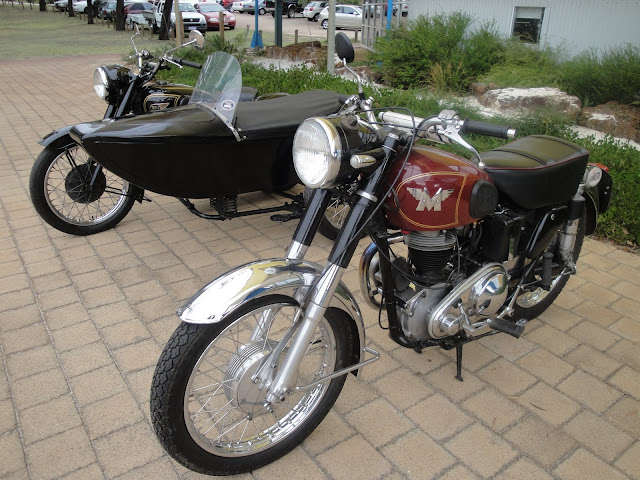 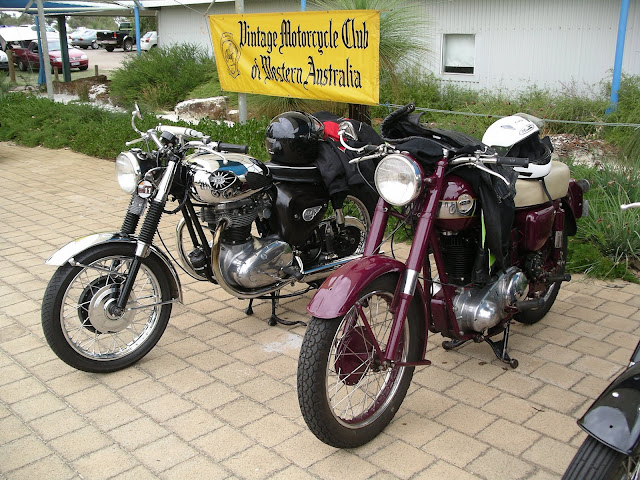 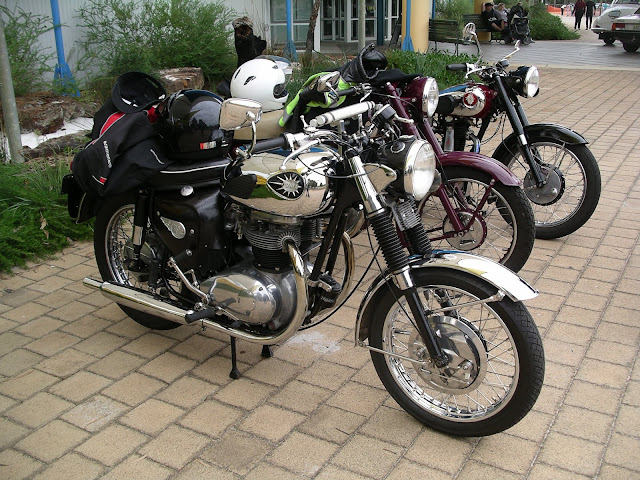 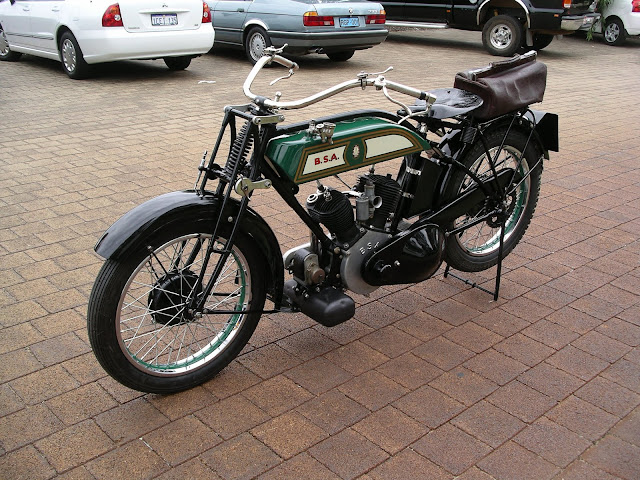 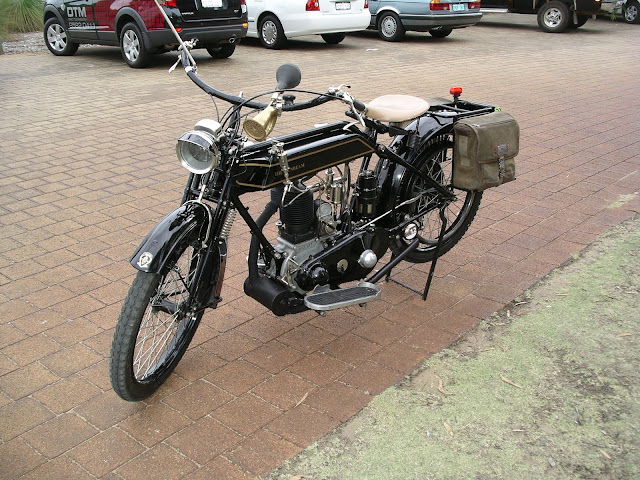 A beautifully restored 1911 Sunbeam - and still ridden!
Posted by Paul Markham at 9:13 PM No comments:

Email ThisBlogThis!Share to TwitterShare to FacebookShare to Pinterest
Labels: VMCCWA 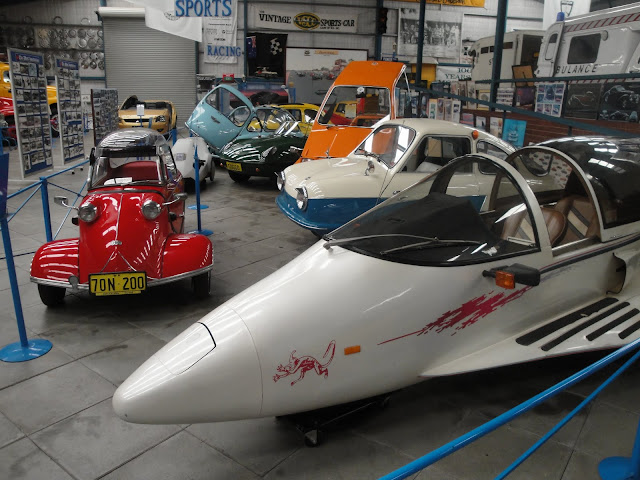 16th of May 2010 was National Motoring Heritage Day all over Australia. It was supposed to be a co-ordinated event involving auto club displays all around Australia. Shelly and I went up to the Whiteman Park Motor Museum where the Perth display was to be held but only the Vintage Motorcycle Club put on a show. By the time we arrived just after 12pm most of the motorcyclists were packing up and heading home so I snapped a couple of shots and had a bit of a chat, then it was off to the museum. Although its only been a couple of weeks since we last visited the museum, they have put on a new display of microcars. I am a big fan of microcars so here's a couple of photos of the new display. 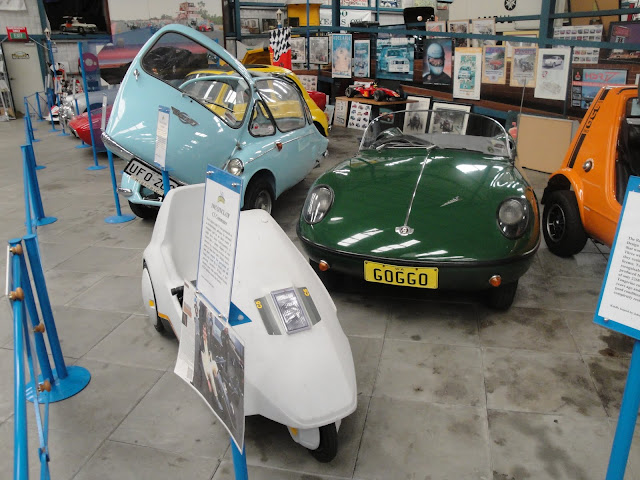 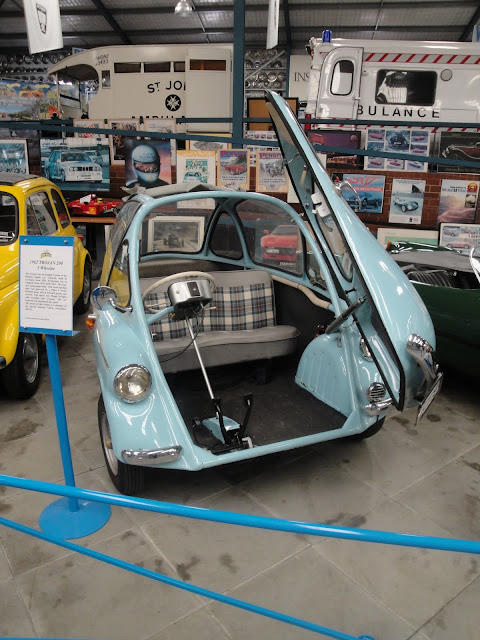 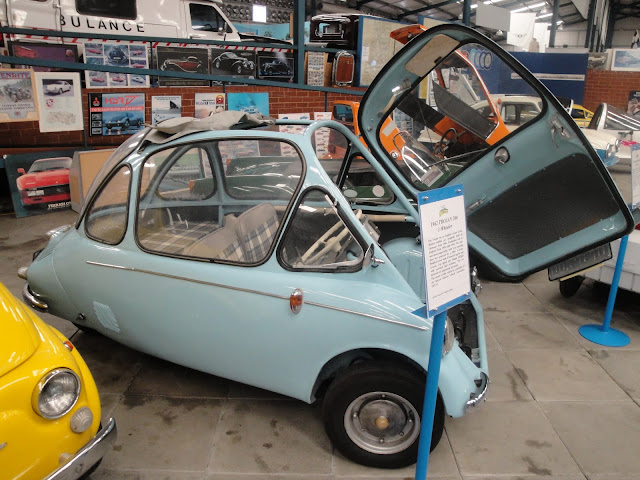 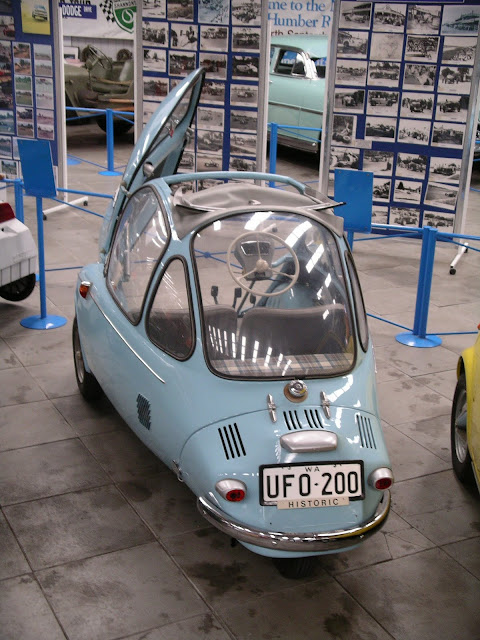 Ernst Heinkel began building the Kabine Scooter in 1955 as an improvement on the rival BMW Isetta. They were originally powered by the same 175cc engine they used in their scooters, but soon upgraded the engine to 200cc. They proved quite popular in post-war Germany, but BMW successfully sued Heinkel for breach of copywrite so after only about 1000 had been manufactured in Germany, Heinkel offshored production to Ireland. They continued production there for a couple of years before selling the rights and tooling to the British company, Trojan. Trojan produced about 6000 units of the popular little car until Trojan wound up in 1963. All up about 26,000 Heinkel and Trojans were produced. 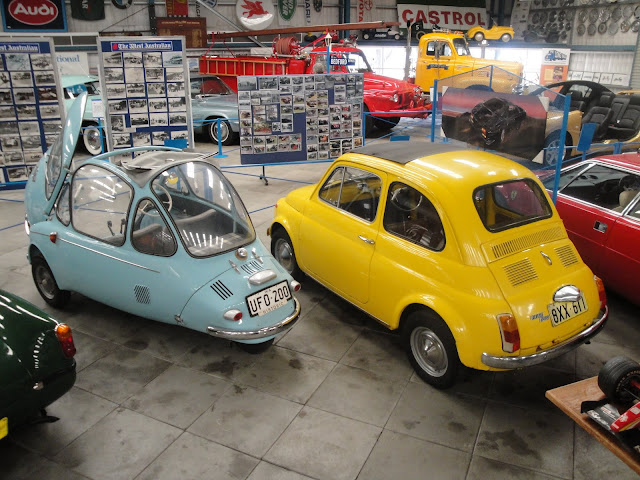 A rear view of the Trojan and Fiat Bambino. The tiny size of the Heinkel engine is clearly apparent even from the outside. 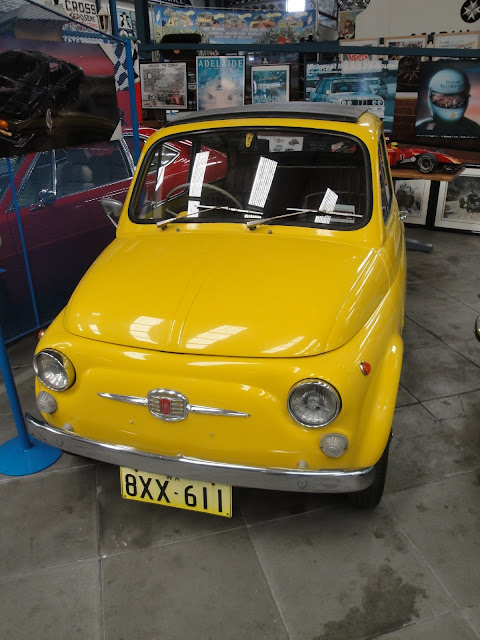 An Italian icon, the Fiat Bambino. 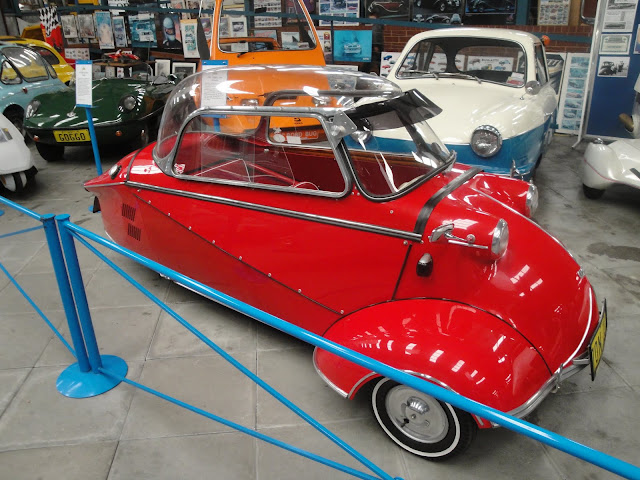 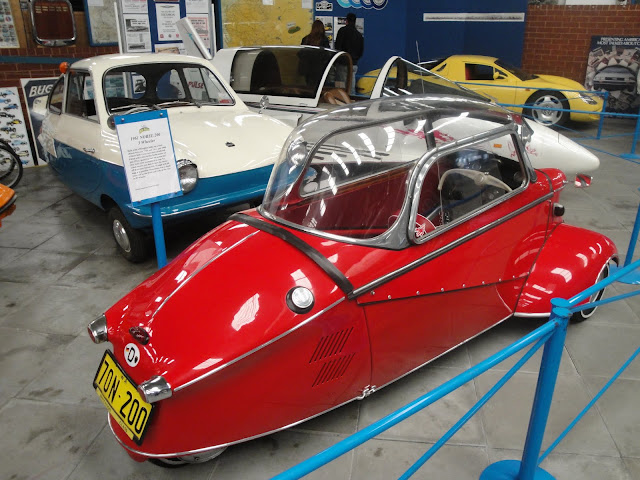 One of my favourite autos of all time, the Messerschmitt KR200. 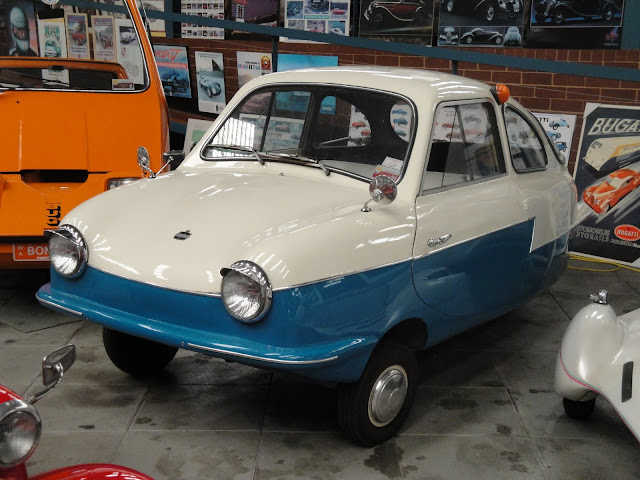 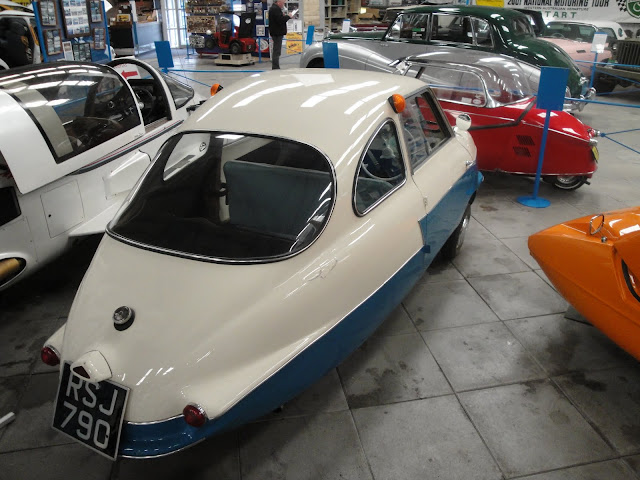 The German Fuldmobil was amongst the most widely copied microcar of the 1950s. It was originally built by the German company Fulda with a pressed metal body and a 191cc Sachs engine in 1950. The metal body was later replaced with a streamlined fibreglass body. Engine size progressively increased and even a four wheeled version was released. Fulda licensed the design to many countries, who produced it under a variety of a names - King Fram in Sweden, Attica in Greece, Hans Vahaar in Chile, Bambi in India and Noble in England. This is an English Nobel 200. The 'success' of the Fulbmobil is surprising as it was a poorly designed and handling vehicle. Here is a link to a blog documenting the restoration of a Noble 200. http://www.nobel200.com/

It looks like this car might have come from this ex-museum collection that was sold in 2008.
http://blog.hemmings.com/index.php/2008/10/07/save-these-microcars-cranwell-lincolnshire/ 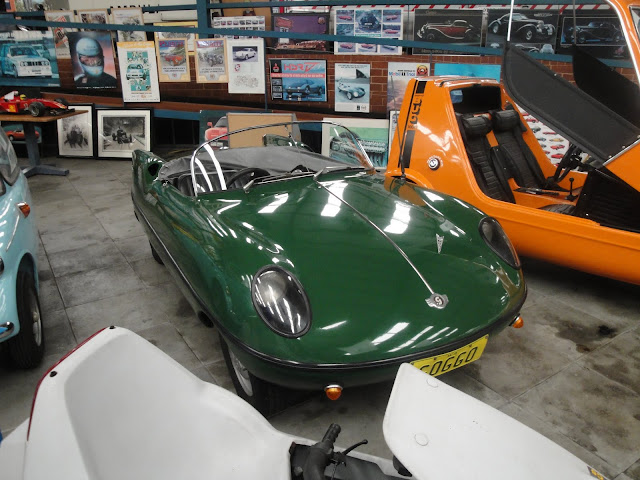 A legendary car in Australia, the Goggomobil Dart. Hans Glas was a German scooter and microcar manufacturer. Buckle Motors in Australia imported bare Goggo chassis and engines and installed a sporty fibreglass body. Interestingly these little sports cars are so low to the ground that they have no doors, driver and passenger simply step over the side walls into the car. About 1700 were built. 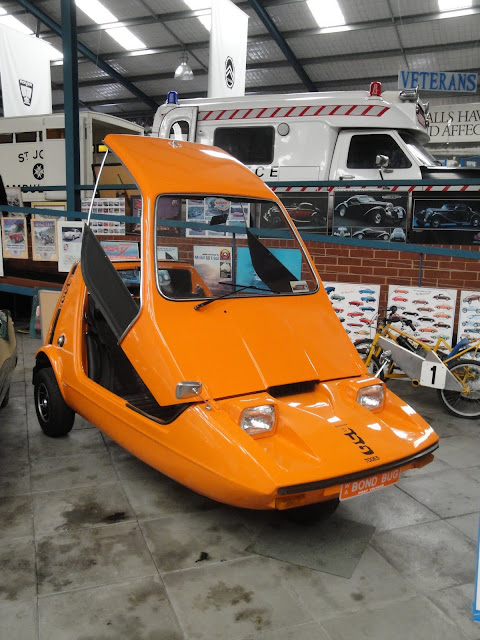 The English Bond company were making three wheeled microcars since the 1930's. The 1972 Bond Bug was their last attempt at three wheelers before they folded up. 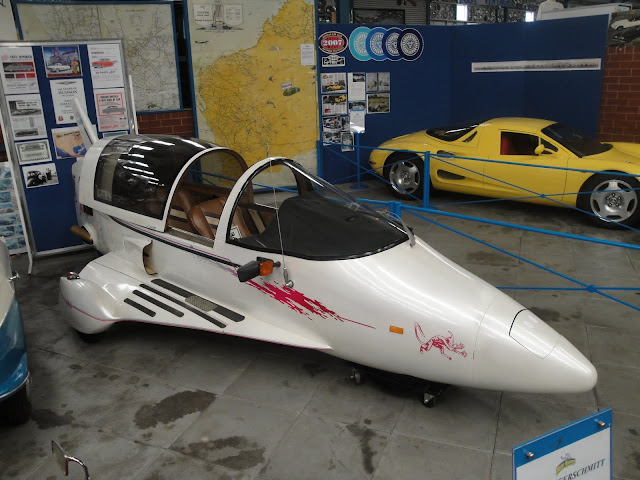 The 1986 Litestar Pulse looks more like a plane than a car. Here's a link with some more information about these strange vehicles.
http://www.autocycles.org/
On a related theme, here's a video from an early Top Gear of the Eco-car.
http://www.youtube.com/watch?v=VbdkZB9-Sd4
Here is a link to Minutia microcar blog. Sadly it's no longer being updated but it still has lots of great photos. http://minutia-microcarsminicars.blogspot.com/

I later discovered that most of these vehicles were loaned by the Special Interest Vehicle Association (SIVA), the car club I would later join and become president of for a while.
Posted by Paul Markham at 4:47 PM No comments: 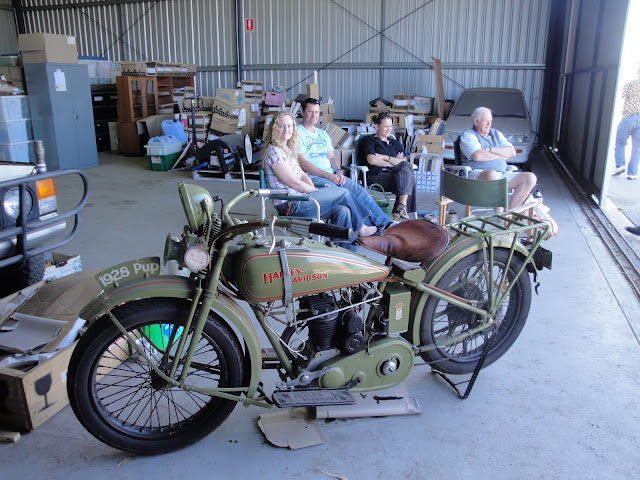 Some months ago I joined the Vintage Motorcycle Club of WA. I had hoped to have the Ariel ready for annual presentation day in February but it was not to be. I'm pretty sure the Ariel will be able to make the next big event in May. Fingers crossed!

After I joined the club I found that two of my relatives are also members and so we got in touch. On Sunday Shelly and I went over for a visit while club inspectors conducted their annual inspection of one of my uncle's collection of Harley Davidsons. 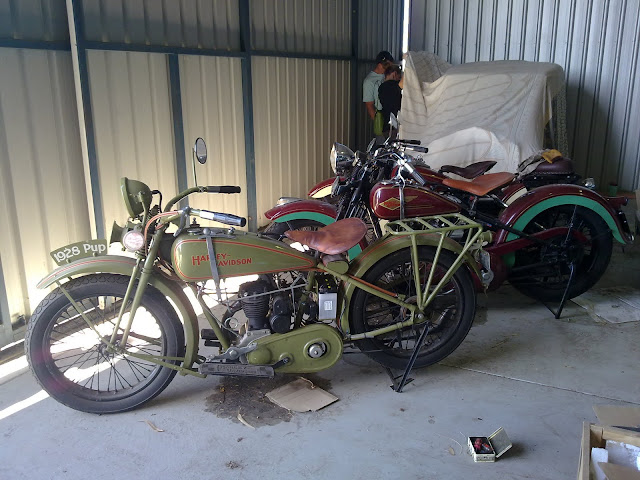 I've never been much of a fan of Harley Davidsons but the three Harley's in his shed were absolutely gorgeous. The bikes hadn't run for a while so each took some tinkering before they burst into life. I didn't get to have a ride but it was great just to spend the time talking about the bikes, their individual stories and the ups and downs of collecting. All up it was a great afternoon. 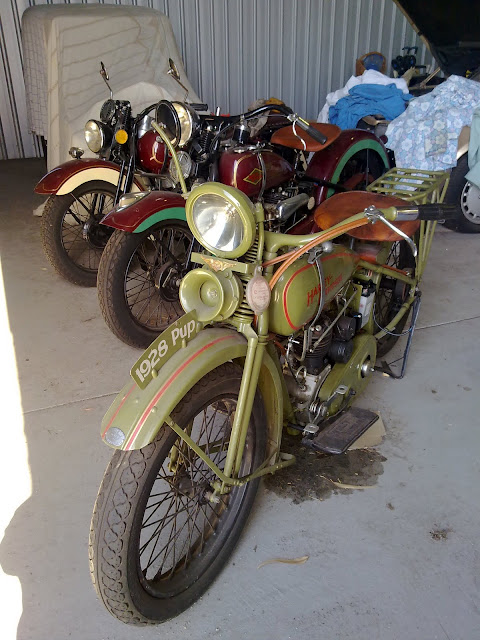 This 350cc Pup was oldest bike in the collection. The Pup was introduced as an economy model for export markets in 1925 but its small engine meant it wasn't a very popular model. Front brakes were introduced until 1929 so perhaps it best that it doesn't go that fast! 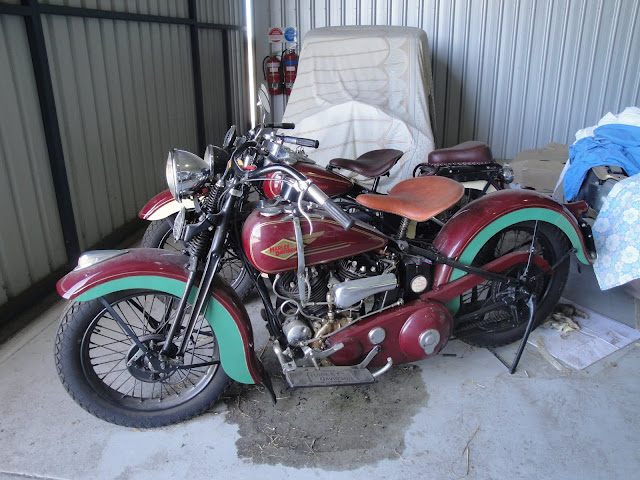 This monster was a former police bike that was picked up at auction in Geraldton in the 1960s. My uncle had heard about the auction and made a fairly ridiculous bid, not expecting to buy the bike. But the day before the auction there had been a storm that had prevented many bidders from attending the auction so he won it by default. He had it tidied up and repainted as you see it now. It's a truly marvellous machine. The engine took a little while to start (there was a bit of a petrol leak) but when it did, it really did! The inspectors, who both had a ride, came back gushing about what a wonderful 'piece of kit' it was. It ran so smoothly and just tore away. Here's a short video of the engine idling along after it was first kicked over. 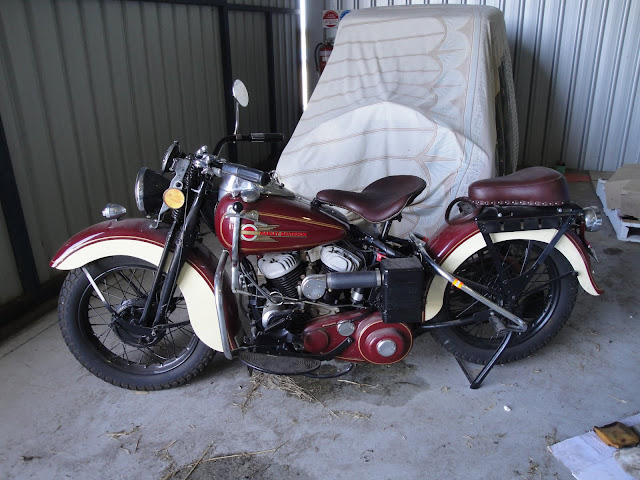 This was an ex-army surplus bike that my uncle also picked up at an auction. It was just as impressive as the VLD in appearance, but after the growling, deep throated power of the 1200, it seemed kind of pale in comparison. This one needed a bit of push start but once it had 'cleared its throat' it just rolled as smooth as silk.

I find it interesting that these bikes have totally different controls to modern bikes - a foot clutch, a hand gear change and left hand throttle. I recall somewhere that Harley (and Indian), who had major contracts with US police forces placed the throttle on the left hand side so that the police would have their right, gun hand free, but this has the ring of an urban myth.

After a couple of hours of chat and numerous cups of tea, the bikes were wheeled back into the shed and the bedsheets were furled over them again. They'll probably be out for a couple of runs later this year and this time I hope to be along to report on them.
Posted by Paul Markham at 8:45 PM No comments: