It's been several months now since I've updated the blog. This is partly an indication of the progress to date and partly because I've just been busy. So a quick summary is in order.


During June and July I received a steady flow of the parts I had ordered. There were some errors however. I was shipped a cigar form Berlin exhaust instead of the Troll exhaust I'd ordered. I had to do alot of searching to find a Troll exhaust, but found one here: http://www.oldtimer-auspuffanlagen.de/ They were very prompt with the purchase and delivery.

I am still struggling to find brake shoes for the Troll. Many vendors seem to offer them but are unresponsive to my enquiries. I have found this the greatest difficulty ordering from German vendors. Although many do reply to my queries in English, they never seem to follow up on the enquiry. I have an order outstanding with http://www.dietel-fahrzeugteile.de/ for brake shoes, a new carburetor and petrol tap but haven't responded to my queries yet. 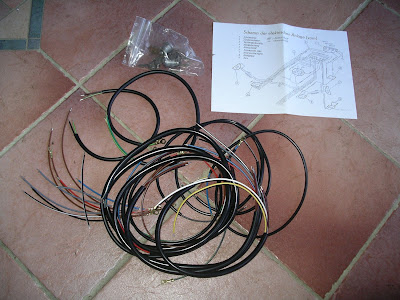 My ambition to take care of the rewiring myself didn't really come to fruition. The wiring set certainly appeared to contain everything required to completely rewire the Troll. The problem however was that the wires are not labeled and the schematic is very theoretical, like a subway map. Without electrical experience it simply proved too complicated for me. As one of my motorcycle owning friends commented, "why would you do it yourself when any little mistake will completely stuff it up." So I decided to enlist professional help. That proved easier said than done. I tried several motorcycle electricians but no one was interested.

Then my Vespa broke down. Again.

I'd mentioned earlier that the Vespa's wiring had failed after its last service. Sam the mechanic wasn't really interested in rewiring the electrics so I started work on it myself. All was going well for a while. I was able to trace the fault to a single wire in the headstock and then the engine failed. In desperation I tried to find a new mechanic and came across Ivo from The Vespa Shop. Initially the main attraction of the The Vespa Shop was that it was relatively close to my house. Ivo was very helpful and even arranged to pick up the Vespa from my house. One day later the bike was fixed and I could pick it up. Ivo and Roberto run a small operation and don't really advertise, but I highly recommend their work (phone -08-93315501, email - vespashop@hotmail.com).

After picking up the Vespa, I had some discussions with Ivo and he agreed to assist with the Troll. This was good news to me. He'll be picking it up (along with all the spares) sometime in October when he'd back from Italy.

More Heinkels
I haven't really done much with the Heinkel but now that I can see the end of the Troll project, I've got to restart work on the Heinkel. I'll need to audit all the parts I have to determine what I need to buy / replace.

I just happened to be looking on ebay the other day and Klaus Wolfe was selling another Heinkel Tourist. This time an 103A2 from 1961. It was in a very similar condition to mine. Ironically, the price paid after eight bids was A$670 - exactly the same price I paid after two bids. Here is a photo. 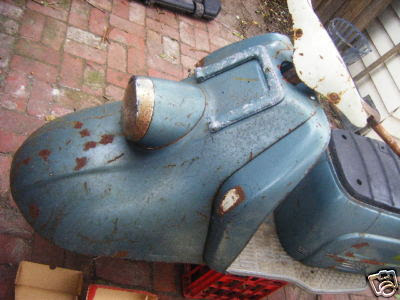 Unfortunately the buyers ID is private so I can't contact them. I'd like to follow the progress of their project too.
Speaking of rare and unusual scooters on the market, Joe D'Ercole of Scootersales in Queensland is selling a number of very interesting scooters, including:
1956 Triumph Tessy
1959 Velocette Viceroy
1956 Maico Maicoletta
1958 NZeta (Cezeta built under license in NZ)
1959 Manurhin Hobby (French built DKW)
1953 NSU Prima (German built Lambretta)
1958 Puch Stier
1956 Triumph Tigress
1959 Terrot
1961 Cezeta
Most are running but some are restoration jobs. I must admit I saw the 61 Cezeta advertised on Ebay a year or so back but it failed to meet reserve. I had even sent a query after the auction but never heard back.

Posted by Paul Markham at 9:34 PM No comments: