Two-stroke engines have never been able to play a dominant role in English motorcycle construction - at least not remotely in the way that the "engine with only three moving parts” has for long periods in Germany (let us remember that up to 1939 our best-selling 500cc motorcycle was the SB 500 from DKW and that in the boom years after the Second World War the two-stroke engine dominated motorcycle engine construction far into the 350cc displacement class.) The lonely aristocratic role of the Scott does not fundamentally change anything in this picture, nor does the Villiers engines built in considerable numbers for the small classes, even less the few outsiders who temporarily appeared in England with parallel two-cylinders.

Even if the business that Royal Enfield and BSA did with the inheritance from Zschopau, when they leaned on the RT 100 and later the RT 125, certainly proved very lucrative, English motorcycle construction is associated all over the world with the image of beefy one- and later two-cylinder four-stroke engines, and it was only the Italians who managed to slightly damage the aura of British motorcycle construction, affecting engine and chassis construction alike. 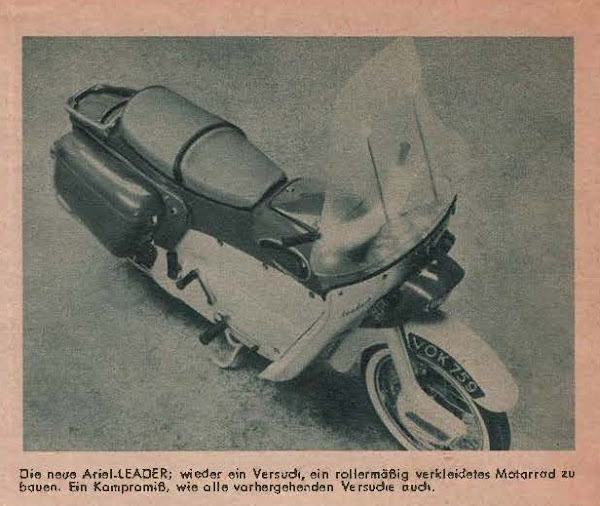 And now Ariel is coming forward and brings a "sensational" surprise with the LEADER. Actually twofold: first the machine itself is fully covered (on closer inspection it is even more sensational in that it is not just about a cover, but a self-supporting body), and second; a 250 two-stroke twin engine, no doubt inspired by the Adler engine, designed by an unprejudiced engineer obsessed with the concept. Hardly anyone can understand this better than we do when this very concept is already regarded as the state of the art wherever high-performance two-stroke engines are built. No one would be happier than we if this new Ariel Motor would succeed in logically continuing the pioneering work once done in Frankfurt. Numerous details prove that everything else was done here than "copying" a proven engine - real further development has been achieved here on a sound basis, which unfortunately others - had to give away. 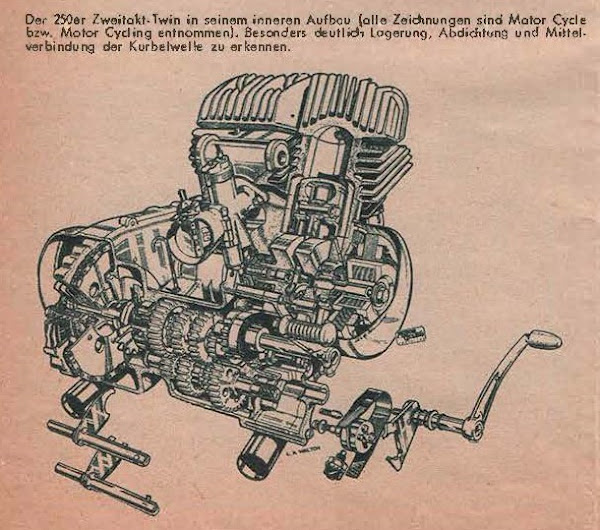 One must be fully impressed by the correctness of the line of development that has been taken, when one can convince one's commercial management - and in England at that - at a time that sometimes looks very much like the twilight of the two-stroke engine, that a plant with a name as rich in tradition as Ariel, to bet on the two-stroke engine card. By the way - we don't believe in the ‘twilight of the gods’ mentioned - the engine with the three moving parts will probably still be very useful, especially from the point of view of common markets and correspondingly damn tough competition!

So first of all, the engine, of which Motor Cycle and Motor Cycling provided very excellent cross-sections and detailed diagrams right at the first presentation (where else can you find that?), a selection of which is shown in our pictures. The first thing that catches the eye is the undivided cast housing for both the engine and the gearbox, designed as a tunnel housing with lateral bearing covers and three-point suspension on the box frame above. One suspension at the front, above the intake port guide, the other two at the rear, on the swingarm bearing of the frame. The crank case is ribbed and obviously separated from the gear case by an "air duct" in the middle. 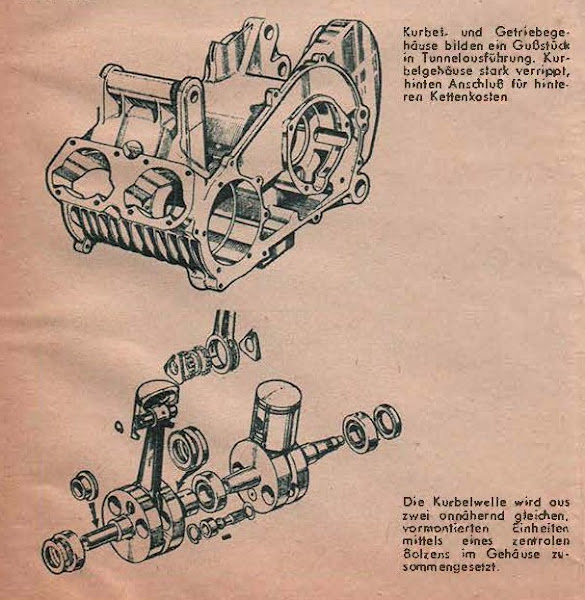 The two individual cylinders made of special gray cast iron are inclined forwards by 45°, they have cooling ribs set at an angle of 45°, which are therefore horizontal, and are held on the housing together with the light metal heads by four long stud screws each. The light-alloy pistons each have two rings that are only 1.5 mm wide, are flat but slightly cambered (normal reverse scavenging), and the compression space in the head is a symmetrical dome, unlike most German high-performance two-stroke engines (except Adler) which use a "Squeeze head." Cylinder bore and stroke 54 x 54 mm = 249 ccm displacement, compression ratio 8.3. The standard maximum output of 16 hp is achieved at 6400 rpm. Separate exhaust gas routing for each cylinder and separate exhaust pipes with diffuser-input, which are again hung at the rear of the frame. 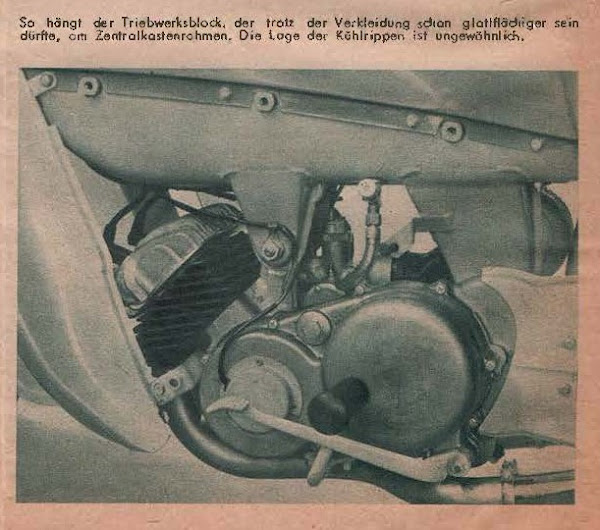 The crankshaft is particularly interesting. The two crank drive units - with their crankpins naturally offset by 180° - are connected in the middle bearing with cones, the cone of the left crank drive unit is pulled into the inner cone of the right one by means of a threaded bolt with a hexagon socket. For the socket wrench to the inside the outer crankshaft bearing journal is centrically drilled hexagonally. The right-hand shaft journal carries the rotor of the Lucas AC machine, the left-hand journal has the 22-tooth chain pinion for the primary drive next to a small external flywheel.

The whole structure of the crank drive and the separation of the two cylinders actually enables the separate dismantling of one engine side, i.e., the individual expansion of the cylinder with head, piston and crank mechanism unit, an undoubtedly original solution of the Ariel designers. 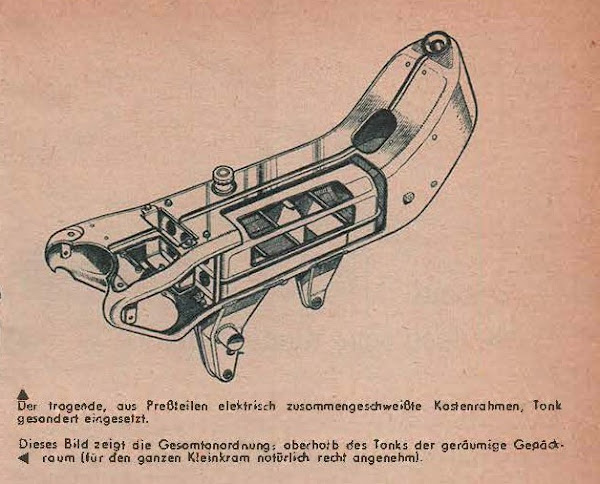 The foot-operated four-speed gearbox follows normal structure. The four gears result provide gear ratios of 5.9, 7.8, 11 and 19:1. The typical English range of 3.2, is too narrow for our continental requirements. Mixture lubrication 25:1 - interestingly enough 20:1 is prescribed when using self-mixing oils - but even that is still less than is customary in England for mixture-lubricated two-stroke engines. But what gives the new machine its own character is the sheet steel box frame, which, welded together from several profiles. It is in a sense "two-tiered" to accommodate a 2½ gallon tank (only 11 litres). The battery and the two ignition coils within the rear part forms the support for the two rider's seats and the upper bearing for the rear spring struts. In order to appear along conventional lines, a dummy tank becomes a "trunk". Lifting the lockable flap reveals a luggage compartment of not inconsiderable volume, in which the steering lock and the tank filler neck are also housed. 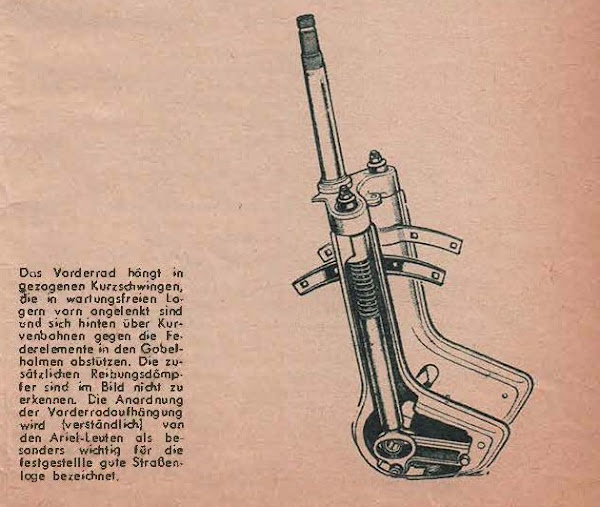 The front fork also consists essentially of two box-shaped bars welded together from pressed parts, which accommodate the drawn short swingarms in their lower parts, which are supported via cam tracks and telescopic guides on the two compression spring elements housed in the bars and are also equipped with dampers are.

On the underside of the main frame are the (removable) side panels, which cover the entire engine compartment and part of the rear section, as well as curved leg protection shields that are raised to handlebar height and a special rear guard panel. At the top, the front fairing merges into a windshield, which has blown around so far on the side that the handlebar grips are also covered. The rear swingarm is mounted in two maintenance-free rubber bearings on the continuous bolt for mounting the engine block. 16-inch wheels with 3.25 tires carry front and rear full-hub brakes with a 6-inch diameter and 30 mm width brake pads. 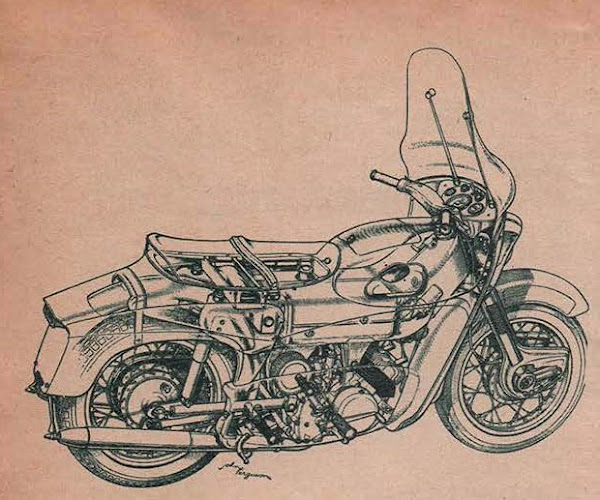 As mighty as the whole machine looks - in terms of the cubic capacity of its engine, it is an "lightweight" - but surprisingly also in terms of its total weight: according to the information in the brochure, this is only 300 lb, that is about 135 kg, and the Ariel people are rightly very proud of this engineering achievement for a machine clad in so much clothing. A key contributor to this astonishingly low weight is the supporting box frame, which is said to weigh no more than 13 lb. The Ariel LEADER undoubtedly sets the standard for the UK motorcycle market - it is a sensation - as we said, both because of the engine and above all because of its total fairing. And just as undoubtedly an effort was made to create something really modern with it, deviating from the orthodox. In itself this idea is not new - others have tried before to build a two-wheeler that combined the advantages of the scooter in terms of dirt protection with the driving characteristics of the motorcycle, and we know solutions which, as far as compromises can be at all, had to be described as successful. But, where have they gone? They disappeared, partly because design and manufacturing deficiencies did not allow them to get beyond the start-up series, and partly because of reasons of principle: because scooterists and motorcyclists form two separate categories that have less in common than some people think. Will the Ariel people have different experiences? For the sake of the engine, we wish them the best.

German write up about the introduction of the Ariel Leader. The German writers focus extensively on the development of the bike's 250cc two-stroke motor, derived from the prewar 250cc Adler twin. Indeed, the association is punned in the title, Adler being the German for 'eagle.' Pgs 436 and 437. 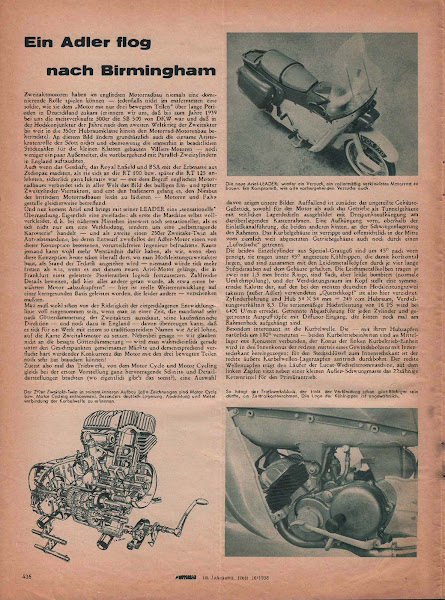 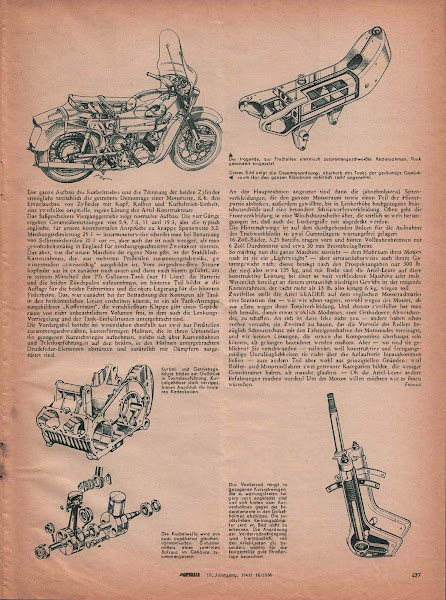 Posted by Paul Markham at 2:34 PM No comments: