Das Kleine Wunder - the story of a remarkable engine

In 1906 a Danish engineer, Jorge S Rasmussen, founded a company in the little German mill town of Zchopau. In an old textile mill, the J Rasmussen and Co turned out machine parts and fittings for industrial steam engines. Jorge was a particularly driven and mercurial director. His interest struck out in many directions simultaneously. Wherever he saw an opportunity he snatched up businesses and by the 1918 he possessed an expansive array of companies. 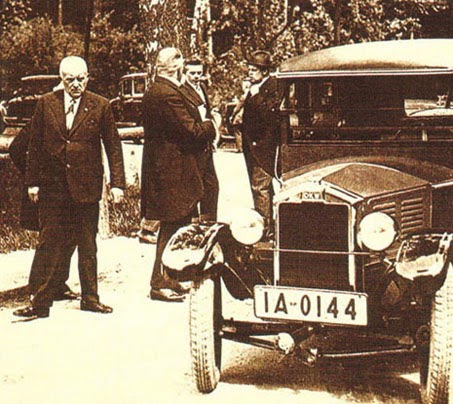 Fuel shortages during the First World War had led Rasmussen to experiment with a steam powered car. This proved not to be a success and was abandoned by war’s end. In 1919 Rasmussen met engineer Hugo Rupp, who had been working on a small two-stroke motor. Rasmussen saw an opportunity and hired Rupp to develop the engine for commercial use. A 50cc demonstration engine was unveiled at an industrial show as a novelty engine nicknamed ‘the boy’s wish.’ Whilst a few toy engines were sold, it was quickly adapted for use as an auxiliary clip-on bicycle motor. The DKW ‘help motor’ sold extremely well in post-WW1 Germany, leading Rasmussen to begin building his own bicycles. 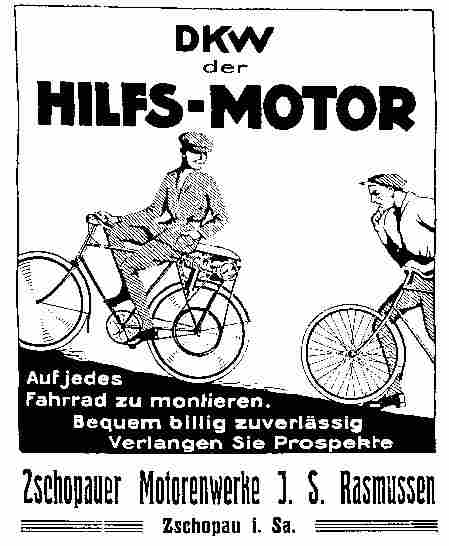 An DKW bicycle fitted with a DKW detachable engine.

The success of the bicycle engine led DKW to experiment with new designs. In 1921 DKW released the scooter-like Golem, powered by DKWs 140cc stationary engine mounted between the rider’s feet. It wasn't exactly a successful design but led in its turn to the improved Lomos in 1922, which featured larger wheels and the engine mounted beneath the rider’s seat. The Lomos sold a credible 2,500 units and turned DKWs attention towards building real motorcycles. 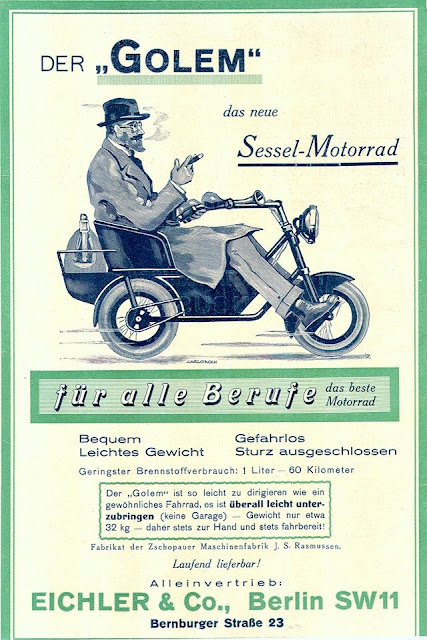 DKW's first real motorcycle was only a small step up from the motorised bicycles the company had been manufacturing to date. The stationary engine that had powered the Lomos was now mounted to the front frame of the bicycle with belt drive to the rear wheel. It wasn't a very efficient machine but it pointed the way to the future. Year on year the design was improved and sales steadily rose. 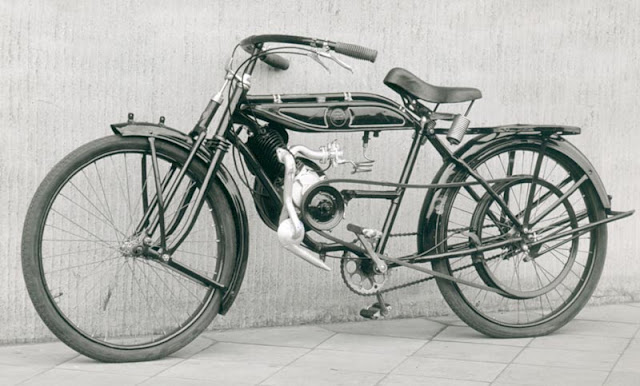 DKWs bicycle origins are clearly apparent in this 1922 machine. The 140cc engine was a real workhorse for DKW. It was sold in large numbers as a stationary engine but was also used in the Golem and the Lomos scooters, the first generation of DKW motorcycles, and the Framo and Phanomen tricycle delivery vehicles.

DKW’s engines of the 1920s had a good reputation but they suffered from a problem common to all two-strokes of the period of combustive efficiency and overheating. Two-stroke engineers everywhere experimented with changes to the port positions, domed, deflector pistons and split pistons in an effort to address this weakness. Hugo Rupp was an advocate of split pistons and would eventually leave DKW for Puch, where he would develop their lineage of split single ‘twingles.’ DKW experimented with domed pistons in their motorcycle range and went on to develop a V4 two-stroke with twin priming pistons for their large car range. The V4 proved to be an over-complicated failure that hamstrung sales of the ‘big’ DKWs.

Jorge Rasmussen was keen to find a solution as DKW had now begun building cars, which required bigger and more efficient engines. DKW’s first car, the P15 had used a water-cooled 600cc twin engine developed for the 1927 SB500 motorcycle. The engine was sufficient for the lightweight P15 but Rasmussen had grander ambitions for DKW. The next car was the ‘big’ DKW 1000 powered by the V4, specially developed as a car engine. Unfortunately, this engine failed to live up to expectations.

Meanwhile, in 1926 Doctor of Engineering, Adolf Schnuerle, had been experimenting with two-stroke engines. His solution of placing dual transfer ports on either side of the exhaust port effectively and effectively solved the two-stroke’s efficiency problems. Schnuerle was academic however, and did no more than patent his design and publish a paper. In 1927 Rasmussen stumbled across Schnuerle’s paper and instantly recognised its implications. Using Schnuerle’s ‘reverse loop scavenging’ removed the need for deflector pistons and complex porting in favour of simple, flat topped pistons. Rasmussen wasted no time and jumped on a plane and flew to meet Dr Schnuerle. This in itself was almost unprecedented as Deutsche Luft Hansa AG had only been founded one year previously. Rasmussen obtained from Schnuerle an exclusive license to use reverse loop scavenging in DKW’s engines. At a stroke DKW had made every other two-stroke engine in the world obsolete. 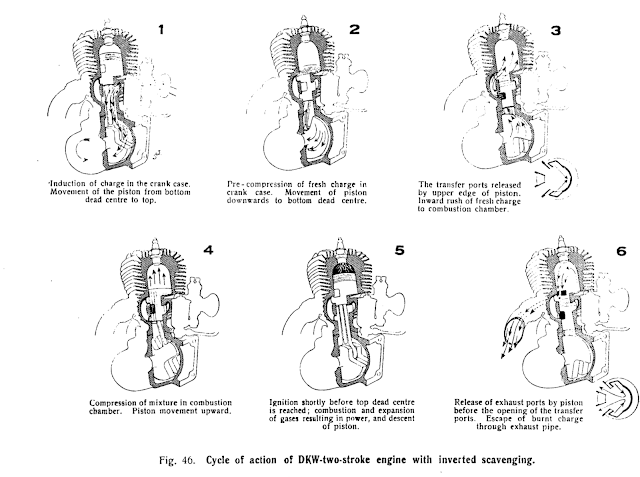 The new Schnuerle engine was introduced in 1928 and soon the company had become the biggest motorcycle manufacturer in the world, producing 65% of all motorcycles in built in Germany as well as supplying engines for many other German marques.

DKW soon expanded its motorcycle range to cater for every market niche, ranging from budget singles of 100cc capacity through to top of the range 600cc twins. 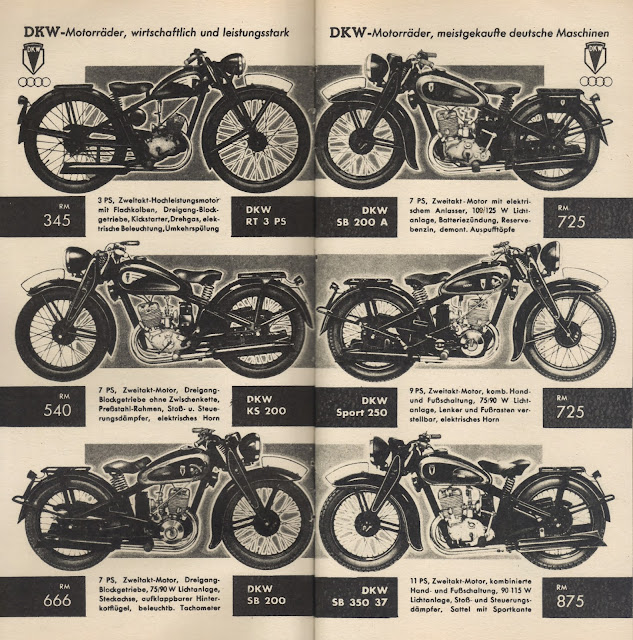 Part of the DKW motorcycle range in 1937.

The new Schnuerle engine was implemented into DKW’s new automobile range. The DKW Front series featured a 600 or 700cc two-stroke water cooled twin that put out between 18 and 25 horsepower (depending on size and spec). This engine would remain in production virtually unchanged until 1954. 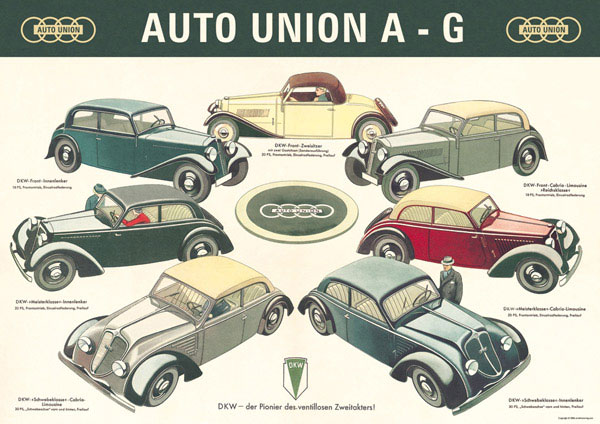 In 1934 DKW introduced the RT100 motorcycle. Unlike other motorcycles in the lightweight class in Germany, the RT100 dispensed with pedals in favour of a proper kick start, had three gears and decent suspension. It was a lightweight, fast and stylish machine. DKW's advanced, production line construction techniques meant that DKW were able to pump out a record 60,000 units per annum. Despite its small size it was a robust and reliable design that influenced motorcycle design for years to come. 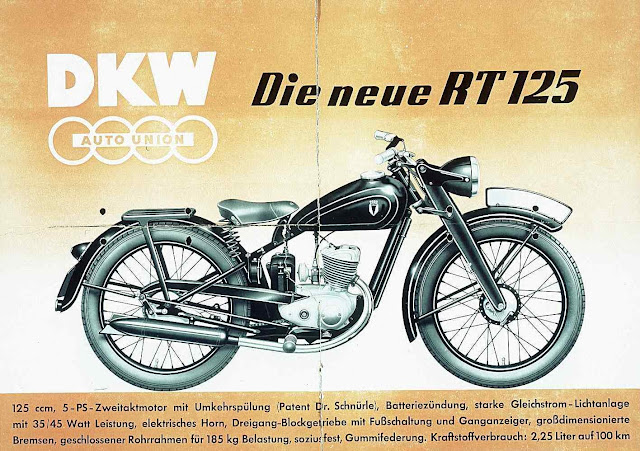 In 1939 the RT100 received an update and an entirely redesigned engine that gave it a significant improvement in power for a notional 25cc increase in capacity. The bike could hit 80kph and carry a passenger on the pillion seat. 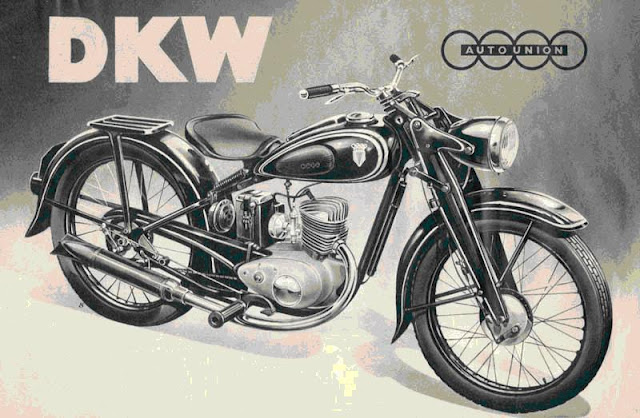 The RT 125 - DKW's "little wonder" would become one of the most influential motorcycles in history.

The bikes nimble performance drew attention from other manufacturers around the world. With tensions rising in Europe and war imminent, the British Royal Enfield company attempted to get their hands on an example. They purchased three motorcycles through an agent in Holland and smuggled them back to England before war was declared. The bikes were examined and reverse engineered as the Royal Enfield Flying Flea. Due its light weigh the Flea was even used as a paratrooper bike during the war.

In Germany, the army had never showed any real interest in DKW due to their two-stroke engines, instead preferring the heavier 750cc BMW R21. Nevertheless, the RT125’s qualities as a light dispatch bike were obvious and military spec RT125 was built between 1940 and 1941, before being discontinued in favour of the larger DKW NZ350-1 as a dispatch rider's bike. The NZ350 saw service in all theatres. 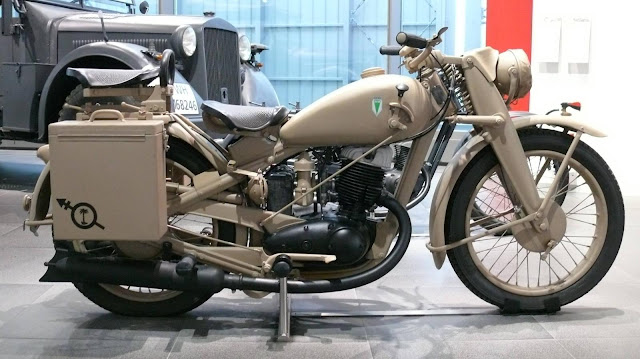 An Afrika Korps NZ350-1 at the Audi Museum. Between 1939 and 1943 DKW simply produced its civilian NZ350 for the army without making any changes to design or build, but in 1943 lack of aluminum led them to produce the NZ350-1 with cast iron pistons.

Ironically, by 1943 the army was finding that the NZ350 was too heavy to operate as a light dispatch motorcycle and production of the RT125-1 was resumed. 12,000 RT125s were built for the Wehrmacht by the end of the war.


Post-war dismemberment...
Before the war’s end the Allies had agreed to annul all German technical patents and divide the German technologies between them. DKW's Zschopau factory wasn't damaged at all during the war but by fate found itself in the Soviet occupation zone. The Soviets stripped the factories of everything of value and shipped it back to the Soviet Union as war reparations. The Soviets shipped the NZ350 production line to Izkevsk and between 1946 and 1951 the Russians built 127,000 NZ350's under the IZH trademark. 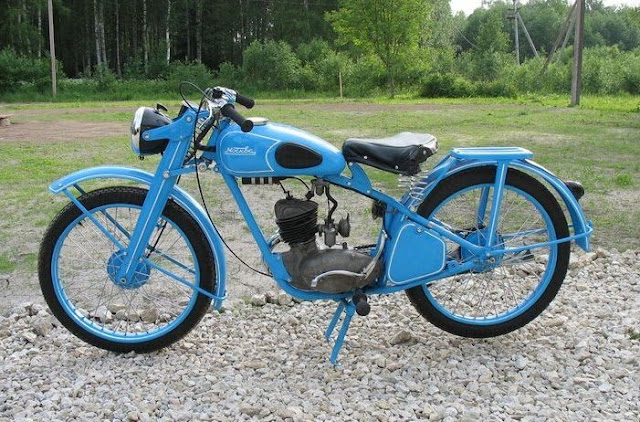 The Minsk Moskva - the start of a long and venerable line of Soviet 125ccs.

The IZH 350 wasn't the only DKW knock-off the Soviets produced. They also began manufacturing a version of the RT 125 as the M-1A Moskva in a factory outside Moscow. In 1951 the plant was relocated to Minsk in Belarus. From then on Minsk specialised in 125cc motorcycles, exporting hundreds of thousands all across the socialist world. The collapse of communism and direct competition with cheap Japanese exports placed the company under extreme financial pressure however, and in 2005 the Belorussian government intervened to prevent the company going into receivership. Although its survival remains tenuous, Minsk continues to produce 125cc motorcycles today. http://www.belarusguide.com/industry1/Minsk_motor.htm

And meanwhile in England
In Britain, the designs for the RT125 were handed over to BSA, but initially no one knew what to do with them. Such a small engine just seemed to have no market in Britain where four strokes dominated. In 1948, BSA took a leap and developed the RT125 as the BSA Bantam in response to a potential export contract for India. The contract however fell through and so the Bantam was sold in Britain. To BSA’s surprise, the Bantam’s low cost and reliability made it an instant winner. The Bantam would go on to become one of the best-selling British motorcycles of all time, with a production run from 1948 to 1973 turning out almost half a million units. 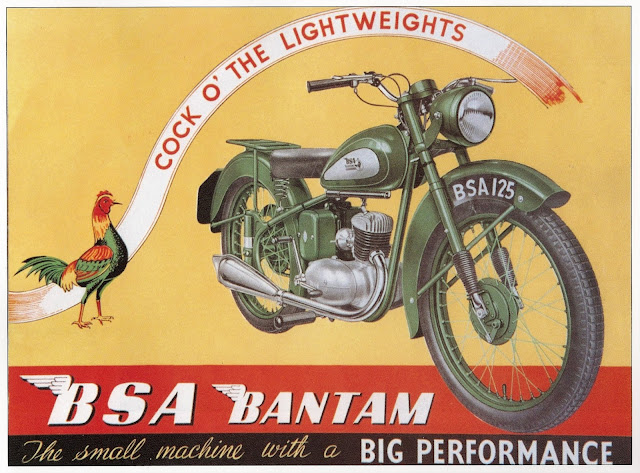 For many in post-war Britain, the 'little rooster' was their first ride.

Across the Pond
In the US, Harley-Davidson had also received the designs for the RT 125 and in 1948 released their version as the Model 125. For Harley-Davidson, who specialized in big twin four strokes, this was their first foray into two stroke engines. In 1953, the engine size was increased to 165cc, but in 1955, they reverted back to the 125cc engine and renamed the bike the Hummer. It would continue in production until 1959. 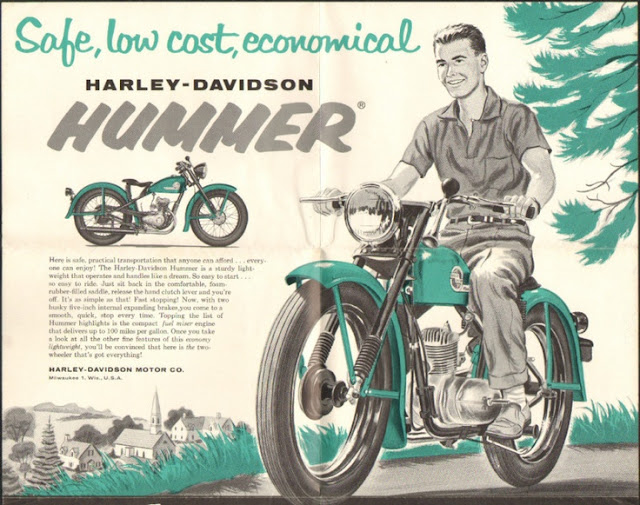 Not quite the whole hog... and a two stroke to boot!

In 1960 Harley-Davidson used a 165cc DKW two-stroke in their scooter, the Harley-Davidson Topper. The engine was built by the Italian motorcycle manufacturer, Aeromacchi, whom H-D had partnered with to build the Topper. Ultimately it wasn't a successful venture. 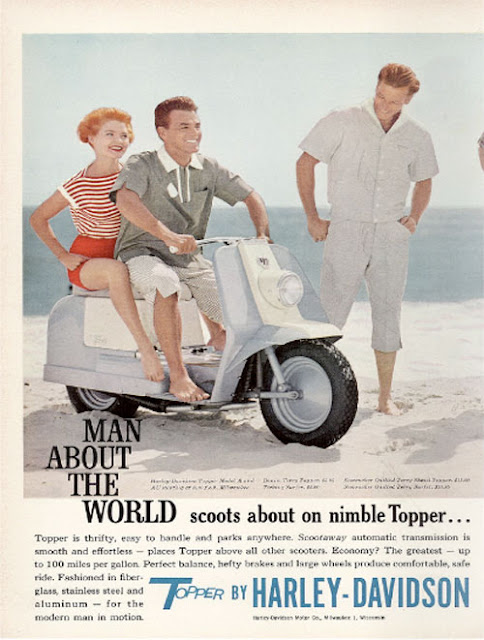 Long regarded as a failure (it was), the Topper is now quite sought after due to its rarity.