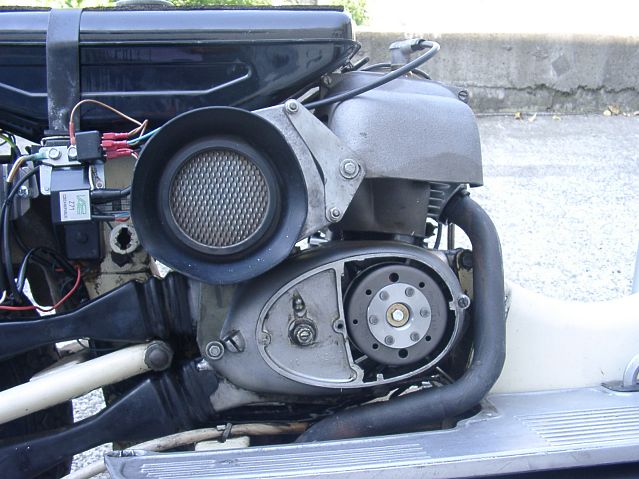 Well, last week it turned out all things weren't quite as equal as I'd hoped. Two problems had arisen that prevented Ivo and Roberto finishing the Troll -
a) the stator was no good, and:
b) the foot brake bowden cable didn't fit.

Fortunately neither of these are insurmountable problems. Powerdynamo in Germany manufacture replacement ignition / generator systems for many German vintage vehicles. It only took a day to turn around the order and they are shipping a new 12 volt generator system directly to the Vespa shop. All up this is something of a blessing. IWL and MZ had to make do with rather weak and unreliable 6 volt electrical systems that only got worse with age so Powerdynamo's 12 volt conversion kit comes highly recommended by other IWL and MZ riders. The kit basically replaces the entire original "lichtmachine" and regulator and comes with all the necessary wiring. The kit is being airfreighted so I'm expecting it to arrive late this week.

The bowden cable however is something of a problem. The new replacement is 112 cms while the original is 100 cms. The original is in pretty bad condition so we're not really keen to use it. Attempts to contact the suppliers in Germany haven't been so successful, but (in desperation) I have managed to secure a second hand bowden from another Troll. It too is being airfreighted and hopefully it will solve the problem, but then again it is second hand and there is no guarantee that it won't be in any better condition than my original. Gotta take the chance though.

So, if all things go well (crossed fingers) and both the generator and the bowden arrive on time as expected... we could ... COULD be looking at completion by the end of March!

A Quick Update
Having only ordered the new generator on Thursday evening you can imagine my surprise when I logged into my emails at work on Monday and found a status update from UPS advising me that my package had been unexpectedly delayed at Perth Airport due to a quarantine inspection. Excuse me? Already? Definitely. The package had already travelled from Berlin to Cologne to Mumbai to Bangkok to Singapore and was now here in Perth. At 8.41am Monday morning it had just been released from quarantine inspection and would shortly be dispatched from the UPS office. Talk about speedy delivery. Although it turns out this is the normal service Powerdynamo use I can't help but be impressed. Some parts I've ordered have taken over three months to reach me from Germany so even in the best case scenario I was expecting it to be week.

And the bowden cable? Turns out I was sent the replacement bowden for a Berlin which is 15 cms longer than that of the Troll. It wouldn't be the first time I was sent Berlin parts that didn't fit. These include a tacho bowden and a whole Berlin exhaust system, which, given that it completely doesn't fit a Troll was something of a disaster for me. It was too expensive to ship back to Germany for a refund so I've ended up keeping it. If you're in Australia and you need a new Berlin exhaust, I've got one for you - it hasn't even been unwrapped.

So, I've managed to find the correct bowden and I've ordered from a different vendor this time. Only problem is I couldn't complete the order online so it's back to polite, poor German emails. I hope they respond quickly....
Posted by Paul Markham at 8:30 PM 1 comment:

Email ThisBlogThis!Share to TwitterShare to FacebookShare to Pinterest
Labels: www.powerdynamo.biz 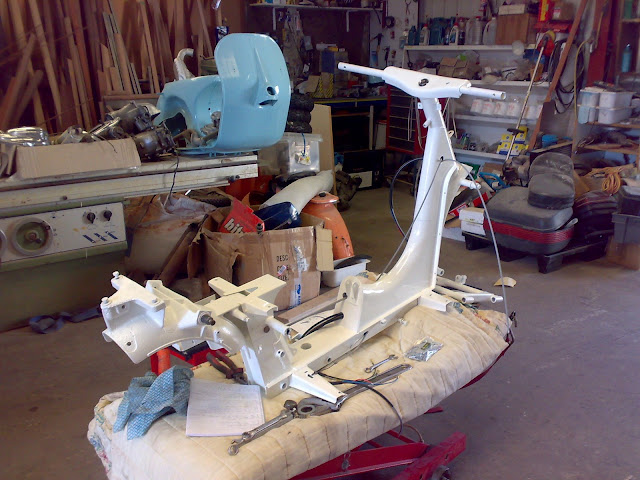 I popped in to see Ivo and Roberto this morning to drop of some more parts and see how things were going. Good as it turned out. The Troll's panels were all back and painted and the chassis was set up on a stand in the middle of their garage. They had threaded all the cables and wiring. Tomorrow the engine would go in and hopefully - all things being equal - it would be finished by the end of the week. 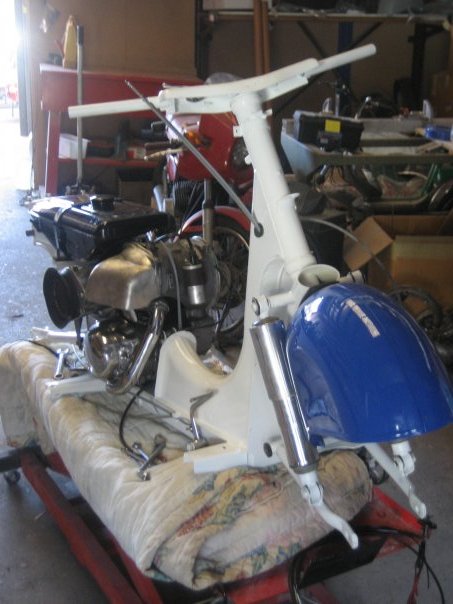 They showed a few of the things they had been working on. They had had to reuse some of the old cables as the new ones did not fit - specifically the clutch bowden and the tacho cable. Also, when they got down to it and began cleaning up many of the old parts, they turned out to be in excellent condition and reuseable - even the rubber! That's German excellence for you.

I snapped a couple of quick pics on my phone. They don't quite do justice to the colour, which is alot more lively in real life. Ivo also has taken photos throughout the process and I'll publish them once the job is done. Not long now until the Beast is on the road! 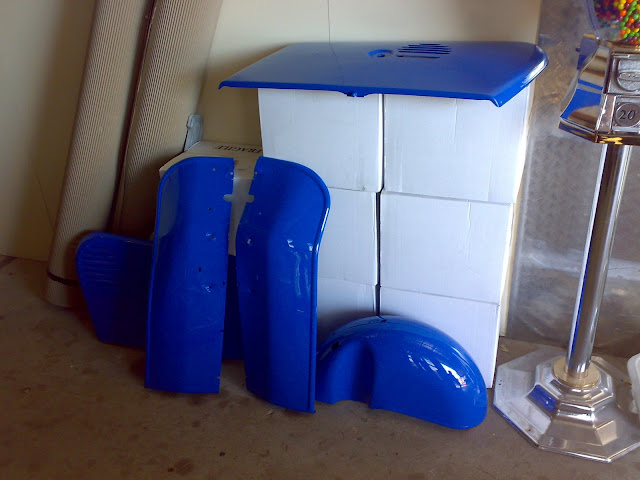 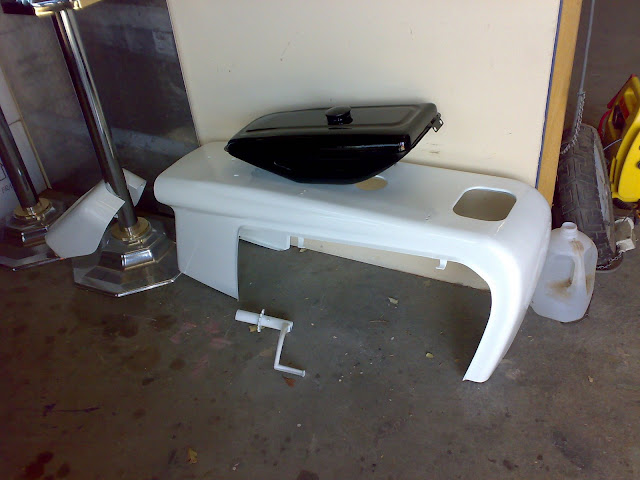 Email ThisBlogThis!Share to TwitterShare to FacebookShare to Pinterest
Labels: The Vespa Shop 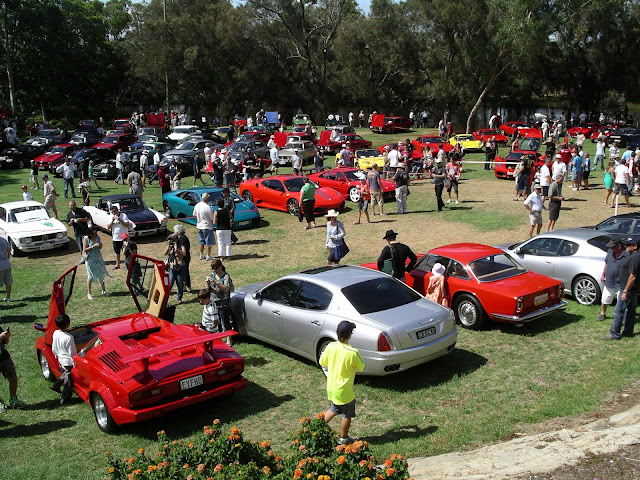 An Italian car, motorcycle and scooter show was held on Sunday 2nd of March 2009 at Mulberry Farm in Caversham (WA). Ivo had told me about it when I visited to discuss the Troll. He and Roberto were attending with a couple of scooters so I cruised down to have a look. There was an impressive cross section of vehicles - Maserati, Lamborghini, Alfa Romeo, & Fiat. The Ducati club was out in force as well as a large group from the Paradise Lost Scooter Club. Here's a small selection of photos from the day. 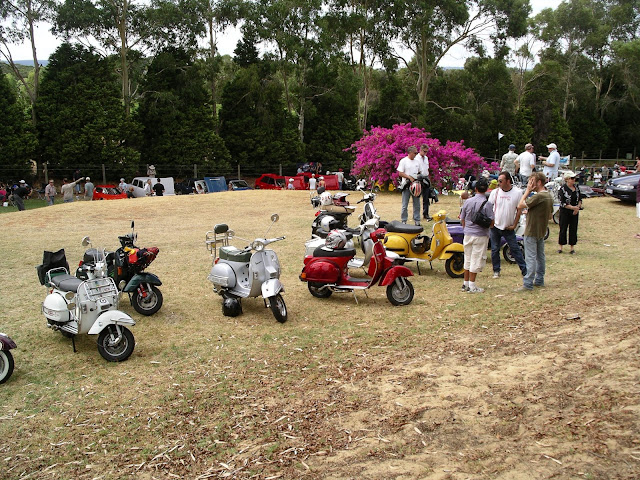 The Paradise Lost boys line up their scooters. 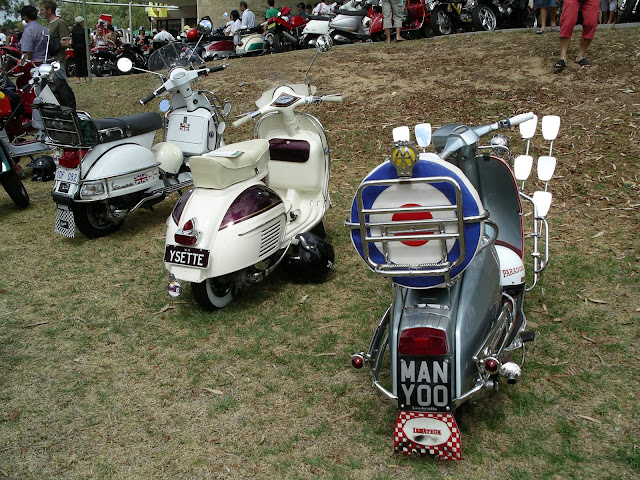 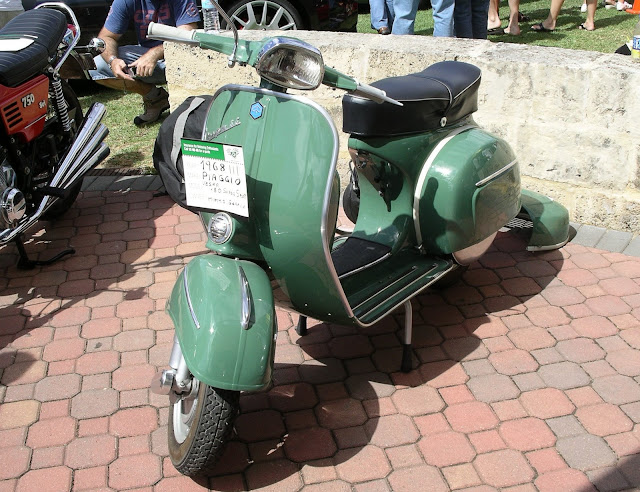 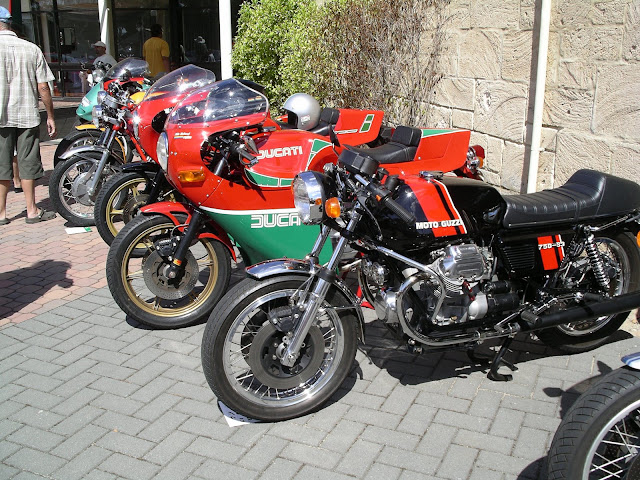 The Ducati club was out in force.

I managed to have a brief chat with Ivo about the Troll. It's being sprayed this week, then it's the reassembly. Barring any unforeseen problems rearing their ugly head, it'll all be finished within about two weeks. Can't wait!!!

Update - January 2011
I first posted this entry back in February 2009 and I never got back to either update the commentary or post any additional photos. Only when I started my post on upcoming events did I go back to this entry and realized what a feeble attempt it was. So here are a few more photos for you. 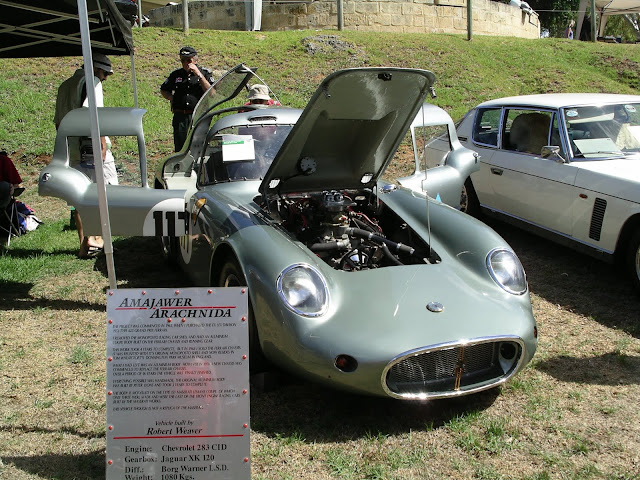 If I remember rightly, this Maserati racer lived a very interesting life. It was originally built as a racecar but after its racing career was over the body was removed and replaced with a more stock sportscar body. The racer body was later found in someone's shed (as always) and then fitted with a new chassis. I think at some later point the original engine and chassis was fitted with a new reproduction of the original racer body resulting in two versions of the same car. But I may be wrong.... 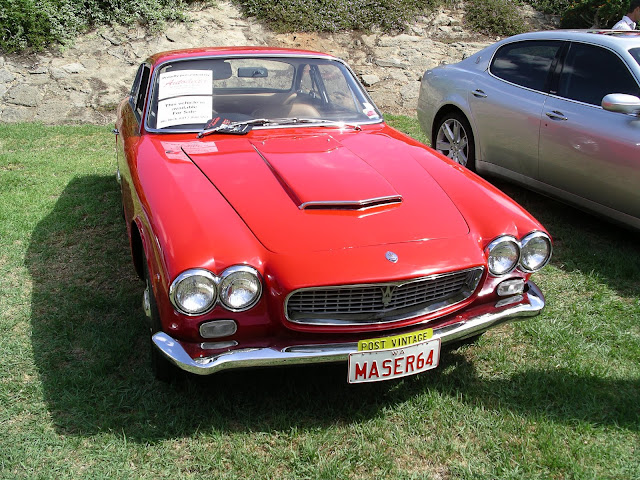 1964 Maserati. I was surprised how many Maseratis were on show. I didn't take that many photos though as they don't really appeal to me. 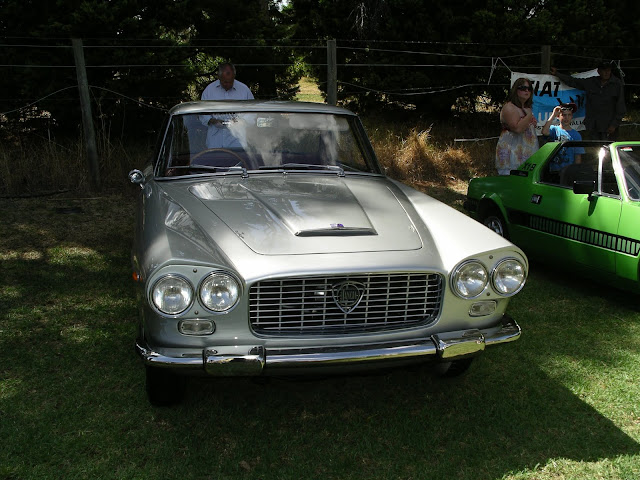 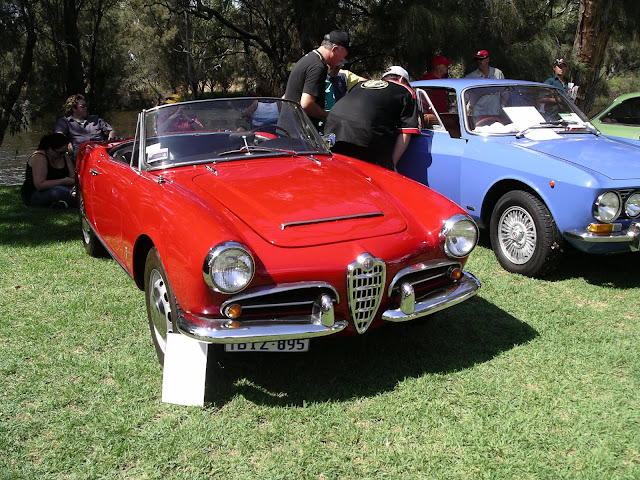 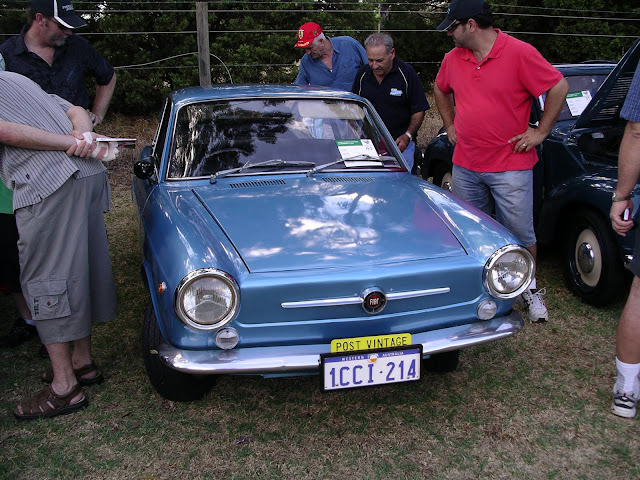 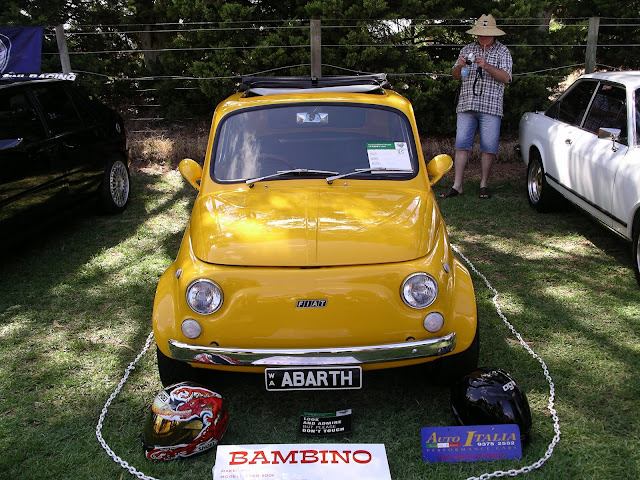 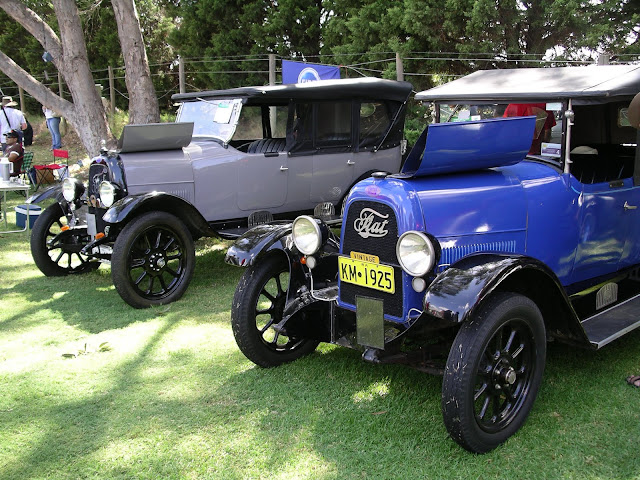 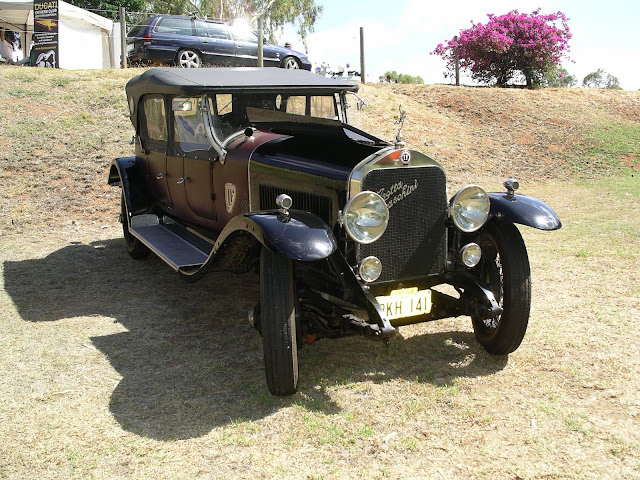 The belle of the ball. Isotta Fraschini 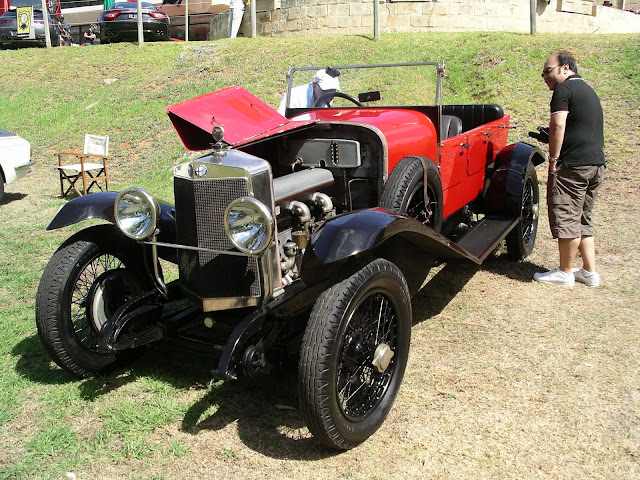 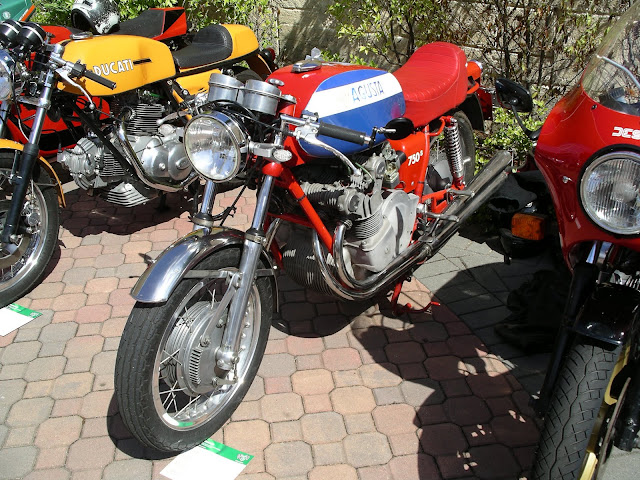 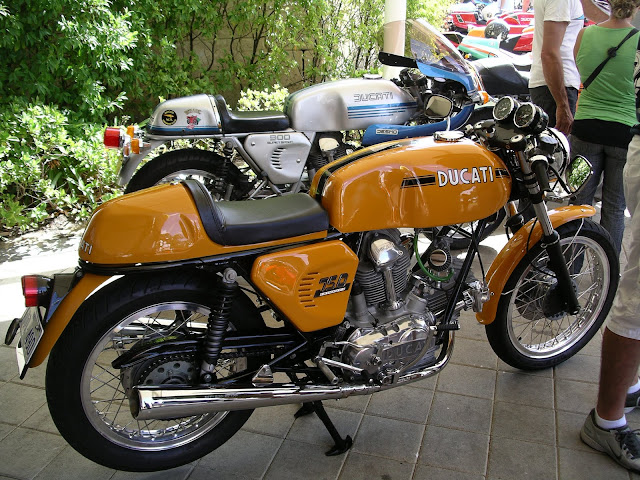 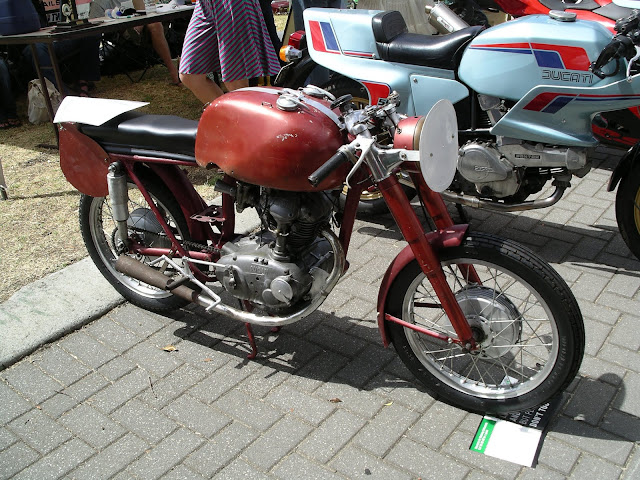