I haven't had much opportunity to work on the bikes over the past couple of weeks so I haven't really had much to report.


The Heinkel
While I'm concentrating on the Troll, I haven't really done very much with the Heinkel. It is currently wrapped and boxed up on my veranda. I have however been busily scouring the Internet for parts, which is both challenging and interesting.


Last week my membership to the Heinkel Club Deutschland came through. Membership costs E60 per annum and members are allowed to purchase spare parts directly through the club. Link: http://www.heinkel-shop.de/


The Troll
The Troll has been my priority since it arrived and I must admit I'm quite enamored with it. I'm amazed at the amount of spare parts available on the Internet. Here's a summary of all the parts I've sourced so far:


From Sausewind @ http://www.sausewind-shop.com/
Sausewind supply a wide range of parts for old East German vehicles. There website does not cater easily for non-European orders, however, I contacted them directly by email and they were prepared to ship parts overseas, although they did take quite a long time to respond, but more on that later. They are shipping:
1 set of ox-eye indicators (for handlebar ends)
A full set of brake, clutch and accelerator bowden cables, etc;
A set of hood rubber piping (new).
Total cost = E93


From TKM Racing @ http://www.tkm-racing.com/index.htm
TKM Racing supply a wide range of new and old scooter and motorcycle parts, including East German vehicles. They are shipping:
1 full set of electrical cabling for a Troll (they have kits for all IWL models)
Total cost = E45


I've also managed to source several other parts, such as keys and lock mechanism for the glove box (currently broken).


None of the German vendors I've dealt with appear to get very much overseas business. Only one business accepted credit card for payment, which has meant it's a little difficult to send them the money. I'm currently sending it electronically direct to their bank accounts (seems a preferred method in Germany). So far the process has not been too difficult or expensive, but I've only transferred funds this way twice so far.

The general response to date to my queries has been incredulity. People just don't believe that there are IWL vehicles overseas - at least not in Australia. On one occasion the vendor refused to believe there were any Trolls in Australia, so I sent him a picture (not that he would be able to tell it was in Australia). This got me thinking - how many Trolls were in Australia? I spoke to Klaus and he knew of at least six. He owns two, he's sold two (one to me) and there were two imported in Adelaide. Although it's not conclusive, it certainly seems that the Troll is a rare machine in Australia. One of the sellers on eBay I had contacted asked me whether I'd bought the bike from him as he'd sold one to an Australian and he was very interested to find out how she was going.


Fun with Petrol
When I bought the Troll Klaus had warned that the petrol tank and carburetor needed to be thoroughly cleaned. On Saturday I added a little petrol tank and opened the petrol tap and sure enough nothing moved. So I removed and dismantled the fuel tap. It seemed every space within it was encrusted with lead and sludge. 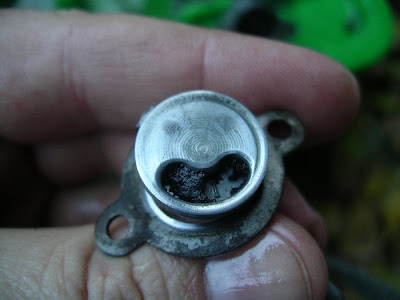 After a damned good soaking I finally cleared the petrol tap. Underneath the tap (pictured above) is a rubber seal with three nipples through which the petrol flows. When I first viewed the seal I thought it was simply a flat seal as the nipples were completely filled with very solid black aggregate. I had to lever out the gunk with a very small screwdriver - carefully so as not to damage the rubber, which was in surprisingly good condition. The tap is now cleaned and fully functional. The Saturday I'll see if we can actually get the petrol to flow into the carburetor.

I installed the battery and tested the flow through the wiring. Despite the dodgy appearance of the wiring almost everything electrical seems to work, except of course the indicators, because they've been removed. The brake light too had been severed. All this wiring will be replaced when the wiring kit arrives.
Posted by Paul Markham at 9:12 PM No comments:

I don't place much stock in omens, but it was absolutely pouring down with rain when I got the call the from Matthew the Truckie that he would be dropping the bikes off today. It was Monday, 9th of June at about 8am and I was on the bus to work, so I jumped off at the next stop into a veritable thunderstorm, got absolutely drenched and caught the next bus home. Matthew said he would be there at 10am and he damn well arrived spot on the dot. It was big rig and the bikes were packed in the middle so it took a lot of shuffling and reshuffling by his packing crew to unload the bikes. Well, not exactly bikes, more boxes of bits and things really. One of the guys asked me, "what the hell are you gonna do with all this junk?" (sounds a lot like something my wife would say). "I'm planning on restoring them.", I replied. He looked dubious. I guess I looked dubious too. 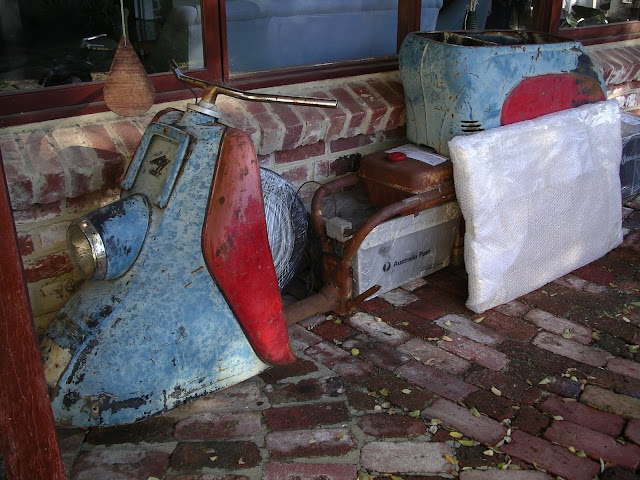 The Heinkel came in 8 boxes (including the chassis and panels). Of course I knew what I was getting when I bought it, but it was still a bit of a shock to see it right there in pieces on my front lawn. The Troll was shipped whole of course, and Matthew hopped on it and coasted it down the ramp. I was really excited as I wheeled it down the driveway but it wasn't long before the full realization of what was ahead caught up with me. A quick once over of the Troll revealed numerous "challenges" to be resolved before it has any chance of getting on the road. While parts of the body are in very good nick, other parts are very badly worn. It needs a damn good panel beating. The body however is the least of the bike's problems. The throttle was broken, it's missing its indicators, the front brake is partly seized I think and new cables are required. I suddenly felt completely daunted by the prospect of all the work ahead.

Fortunately, the thunderstorm had passed just long enough to unload the bikes. The Heinkel boxes were packed under my porch and the Troll was parked in the driveway. I took a couple of photos and then I headed off to work. My wife messaged me on the way to hear how it all went. I sent her a couple of photos. I was expecting Shelly to be extremely dubious, but she said the Troll looked really cool - whether it was running or not. That was a relief. 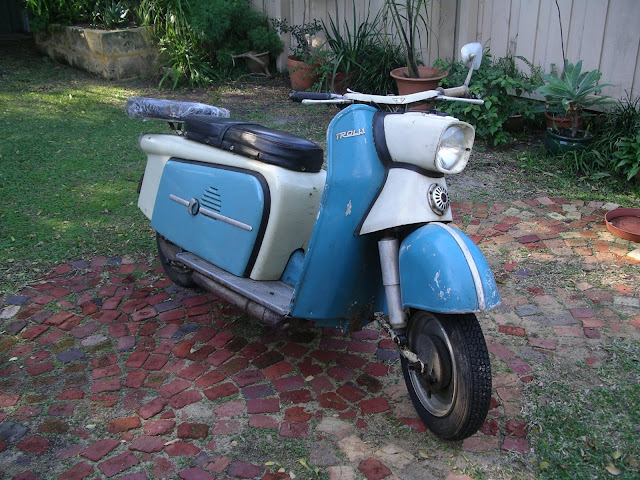 Unfortunately rain and work commitments during the week prevented me from carrying out a proper appraisal of the Troll, nevertheless, I spent the rest of the week searching the internet for IWL parts. There seems to be is a surprising amount of spares available from German scooter/motorcycle retailers. I ordered a complete set of new cables, new wiring, indicators and rubber seals (the seals on the engine covers are perished in several places. It will be two or three weeks before they arrive. 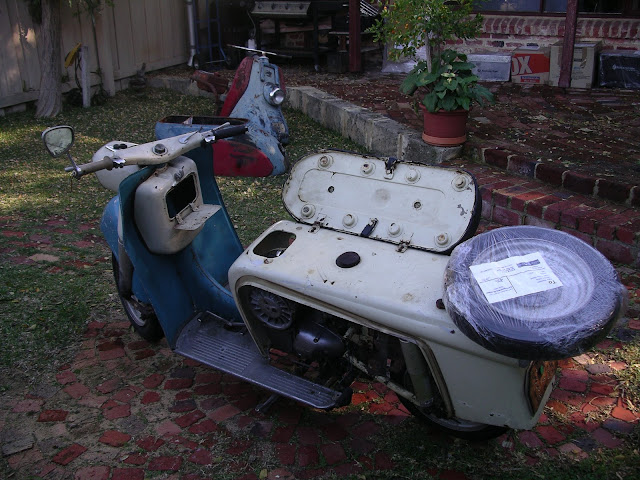 Saturday turned out to be a stunning autumn day - sunshine, blue skies and pleasant warm humidity so I began my first official survey of the bikes. Firstly the Troll:- apart from the problems with the front end, the vehicle seems to be in fairly good condition. The engine seems clean (not really a gauge of how well it runs I know). Some of the wiring looks a bit old and frayed, but I'm going to get all that replaced.

I unpacked all of the Heinkel boxes and - just to get a picture of what is and isn't there - did a bit of a dry reassemble on the lawn. When the Heinkel was delivered I was surprised not to see any wheels. There was only one single wheel packed among the boxes and that turned out to be the Troll's spare. I couldn't see how the Heinkel's wheels could have fitted into the boxes. But they did. Two 8inch wheels and four tyres. They look so diminutive and it immediately made me wonder. Was this really a 103A?? Turns out no. It's actually a 102A-1, confirmed by the ID plate - chassis no 134084 built in Stuttgart in 1955. 17,500 102A-1's were built between 1953 and 1955. Mine was obviously built towards the end of the run. The main difference between the 102 and 103 was the move to 10inch wheels to improve road handling.

As promised, there were two engines in the boxes, both dismantled. Some of the parts looked quite new, others were frighteningly bad condition - the clutch for example. There is a lot of work to do. Things I've identified as missing so far - exhaust, rear shock absorbers, suspension, axle and mudguard, gear change and throttle controls and probably a lot more. After the review I packed all the boxes up again and have stored the Heinkel for now. I've sent my membership off to the Heinkel Club Deutschland and am awaiting the parts and price list. Once I have that I'll begin sourcing the parts.

It's clear the old Heinkel has had quite a varied life. It was originally black but was hand-painted it's current gaudy red and blue. Its original seat has gone and been replaced by a sheet foam glued to marine ply. That'll need to go too. 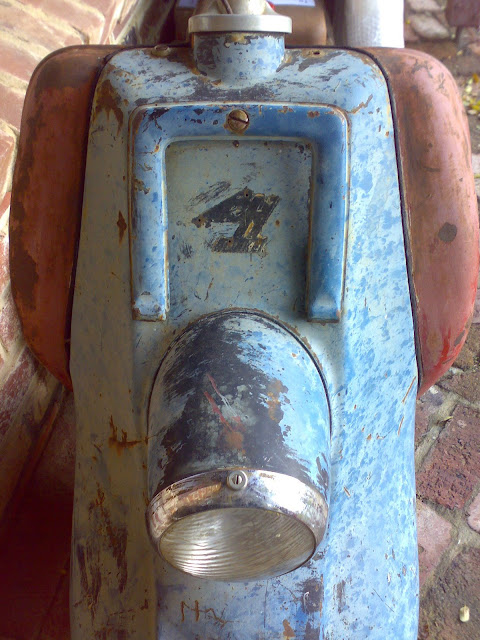 Posted by Paul Markham at 9:28 PM No comments: