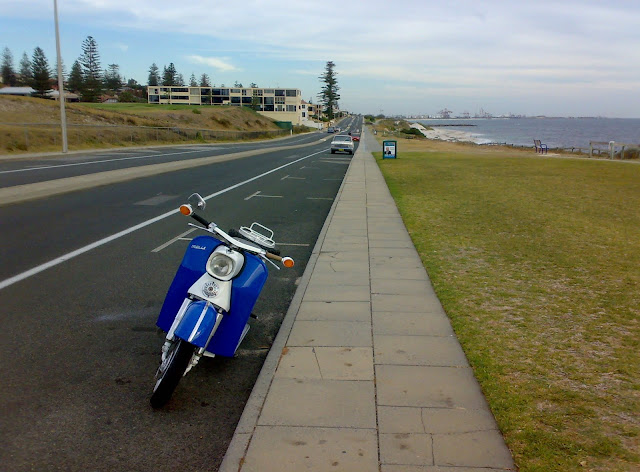 Despite it being winter the weather the past couple of weekends has been marvellous - too good in fact not to take the scooters out of a ride. Monday 1 June was a public holiday, the sky was blue, the breeze light, so I invited Shelly out for a ride along the coast to Cottesloe. The Troll was running marvellously, although it continues to slip out of fourth gear a little too easily. Nevertheless, we scooted up through Cottelsoe without any problem and, as no particular cafe's looked inviting enough to stop, I pushed on up the coast intending to stop in Floreat or Scarborough.

On West Coast Highway by the SAS barracks there's a long run without any intersecting roads that offers the opportunity to open up and push the bike to the limit. The speed limit is 70 kph but everyone seems to do 80 kph. I opened the throttle and although the cars were still overtaking us, I was quite confident we were exceeding the speed limit (naughty! Double demerit points for a long weekend). Then, with the throttle full out, the engine started to sag. All the power seemed to drop away and the Troll began to slow. I dropped a gear and increased the revs but it continue to slow. We reached the turn onto the scenic drive and I pulled into the City Beach carpark. The performance picked up a bit and I nursed the Troll into the Floreat beach carpark, as I expected the cafe there to be open. The engine didn't seem too hot but we stopped and walked around a bit allowing it to cool down.

The engine was a little slow to restart but this was nothing unusual. We took a slow ride back towards Freo. Back on West Coast I opened her up again and we sailed along with the traffic. I was beginning to feel better - maybe it was just the throttle cable playing up? But as soon we hit a slight gradient - no more than 5% - the engine began to struggle again. Now this wasn't feeling right. I got off the highway and headed back towards the coast. There were a couple of low hills in our path and the engine struggled to cope. Soon the Troll was wheezing along in first gear up the lowest of hills. As we rolled down into Cottesloe the engine began making some unhappy noises. I pulled over in front of the Observation Beach Hotel just as the engine stalled. Smoke poured from the intake fan - not a good sign! I popped the side doors to allow the engine to cool. The engine was very hot so I assume the fan belt had finally failed. But even after the engine had cooled it resolutely refused to start. So we sat at the side of the road for a couple of hours waiting for my brother in law to bring down his truck to rescue us. It wasn't much fun, but even broken down we had people come over and ask us about the Troll and take a couple of pics. 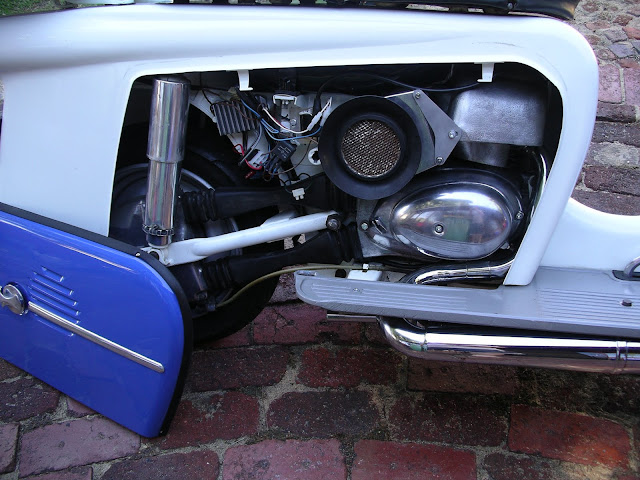 Having never experienced this before I don't exactly know what's wrong but I suspect the rings might have gone as it doesn't feel like the engine has any compression. I've arranged with Ivo to have a look at it but I won't drop it off until I get the last shipment of spares in from Germany (why do some parts take SOOOOOOO long to get here? I mean three months!). I'm expected the latest package to arrive in the next week or so, hopefully not longer as we're off to Europe for three months in six weeks time. So it looks like I'll have to renew my relationship with my long neglected mistress, the Vespa VBB.
Posted by Paul Markham at 10:09 PM No comments: