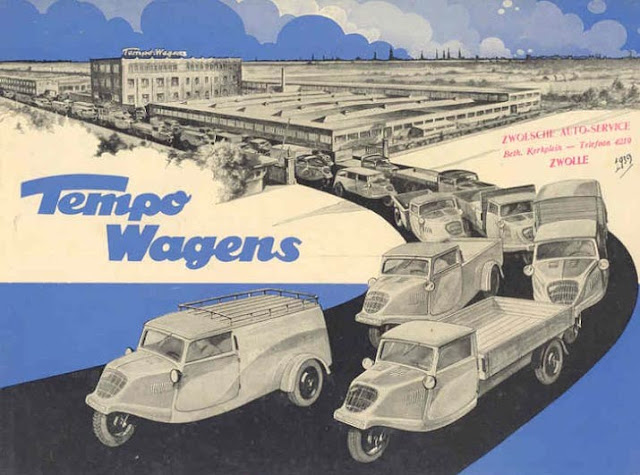 Oskar Vidal and Sohn founded Tempo Werkes of Hamburg in 1924 building motorized triporters. These little 3 wheeled delivery vehicles proved to be extremely popular and the foundation of the company's success.

By the early 30s Tempo were building three wheeled delivery trucks popularly known as the Tempo Hanseat. Hanseats were powered by a proprietary JLO two cylinder two stoke motors in either 200 or 400cc capacity. Versions of the Hanseat remained in production until 1956 and were widely exported around Europe. Oscar Vidal shows off a Hanseat woodie. The three wheeled Hanseat's were incredibly popular vehicles. Under German law they could be driven without a license and, thanks to the small size of their engines, they were exempt of road taxes. They were capable of hauling loads that belied their tiny engine capacity. Companies such as Phaenomen, Framo and Carl Borgward's Goliath also built similar machines.

In 1936 Tempo-werke responded to a Landwehr (army) contract for a four wheel drive light utility vehicle and their response was uniquely unorthodox. The G1200 was powered by two 600cc JLO two-stroke motors, one in the front and one in the rear. Each engine separately drove the front and rear independently suspended axles in much the same arrangement as Tatra used in their trucks. Each engine had its own gearbox and could be operated together for full four wheel drive or they could be run independently for either front wheel or rear wheel drive operation. The car had high ground clearance and with the body floating over its independent suspension it was able to comfortably traverse even the roughest ground. Top speed was 70 kilometres per hour. Fuel economy was a reasonable 12 litres per hundred kilometres, which could be reduced further by running on one engine alone. 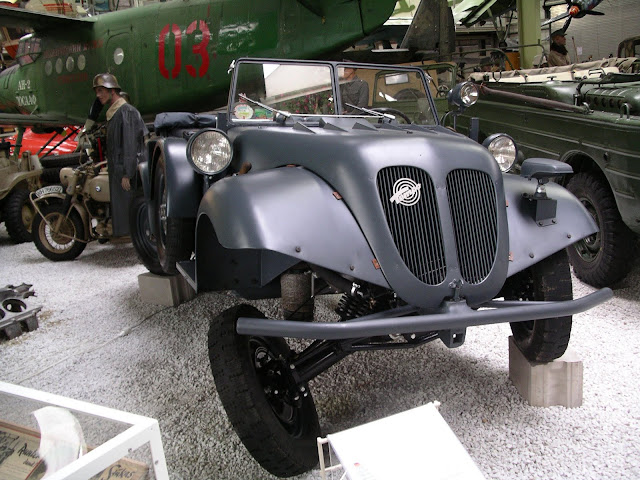 Few German Tempo G1200s survived the war but several Scandinavian and Eastern European examples survived. This example is in the German Sinshiem Technik museum. It has been posed in a position that highlights its ability to handle rough terrain.

Despite this the Landwehr were prejudiced against two-stroke engines in both cars and motorcycles, even refusing Germany's biggest motorcycle manufacturer DKW a contract, so it came as little surprise that they showed no interest in Tempo's offering. Tempo however were not disheartened and successfully shopped the G1200 to other European armies, including Denmark, Sweden, Finland, Latvia, Croatia, Czechoslovakia & Romania. The G1200 was even sold as far afield as Mexico, Brazil and Argentina.

The Second World War put an end to Tempo's export market. The German army took over those Tempo's on the production line and seized some of those in foreign service. Production ceased in 1943 after only 1335 were built. After the war the company reverted to manufacturing its trusty three wheeled product, which revived the company's fortunes. The three wheeled Hanseat continued in production until 1956 when it was replaced with a modern, four wheeled van (see photo at the top). Tempo was later bought out by the truck company Hanomag. 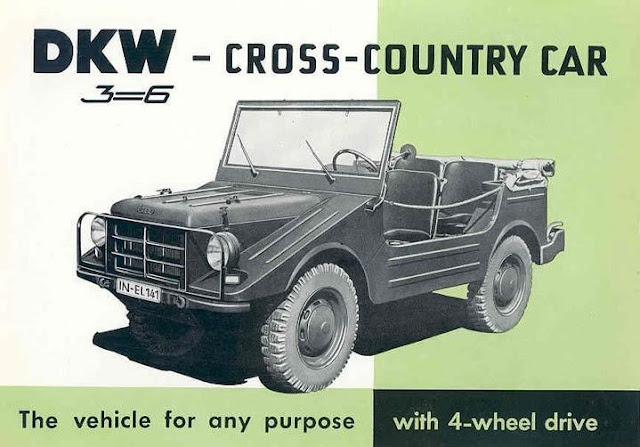 In 1956 the Bundeswehr tendered for a replacement for the army's aging Willy's Jeeps. DKW's offering was a four wheel drive vehicle powered by their trusty 3=6 900cc two stroke engine, but with lower gearing ratios. Sales were originally restricted to the army and government agencies, such as the fire department. The Munga (which basically means multi-purpose, all terrain vehicle) was also purchased by the armed forces of other NATO countries.

In late 1957 DKW released a civilian version which proved very popular with farm, forestry and alpine rescue services all across Europe. Mungas were also exported to South Africa, Argentina and Brazil. All told about 47,000 were built before production ceased in 1968. 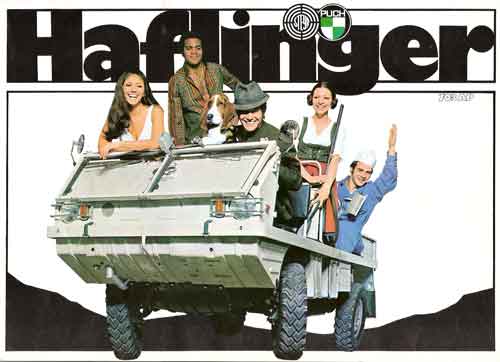 In 1957 Erich Ledwinka, son of Tatra's legendary chief designer, Hans Ledwinka, left Tatra and retired from Czechoslovakia to Austria. Erich seemed unable to avoid following in his father's footsteps and took a job at Steyr-Puch. One of his first projects was for a light four-wheel drive. The result was very much a little Tatra, based around Tatra's distinctive backbone chassis with independently suspended half axles and powered by a rear mounted 640cc twin cylinder boxer four-stroke engine.

The Haflinger was simplicity and robustness combined. The body was a basic steel tray without any creature comforts and could be easily and quickly be removed from the chassis. All surplus equipment, such as doors, roof, and bench seats were optional. In its simplest form it was only 600kgs and could be lifted by four men. 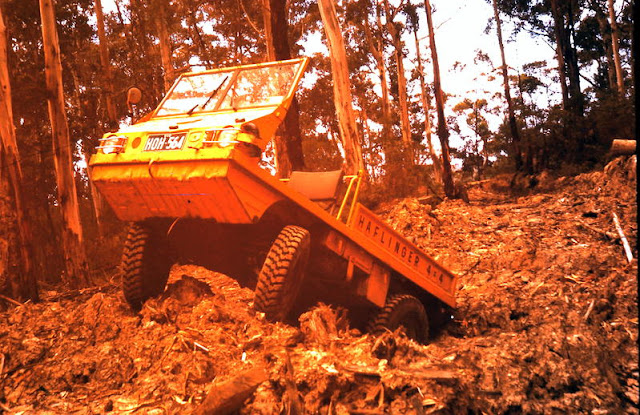 The first Haflingers went on sale in 1959 and both the Austrian and Swiss army bought then to replace their aging fleet of Willy's Jeeps. They were also sold as far afield as South Africa and Australia. The Australian army bought some and used them successfully in Vietnam.

All up about 16,500 Haflingers were built between 1959 and 1975. Later models had optional fibreglass cabins, proper doors and detachable hard roofs. In 1968 Steyr-Puch released a much bigger version, the Pinzgauer, a large 4x4 or 6x6 truck. The Pinzgauer however was powered by a much larger four stroke engine. It remains in production today.
Here are some links:
http://www.hy-q.com/cooper/haflinger/haflinger.htm
http://members.westnet.com.au/profpinz/haffyinfo/haflinger_info/haffyinfo.htm http://tdc.haflinger-4wd.com/ http://main.haflinger-4wd.com/
http://main.haflinger-4wd.com/der-puch-haflinger/dateien/austroclassic.pdf
http://microcar.org/0/1Zo0tw/issue3-2011.pdf