Former Zeppelin engineer Paul Jaray was at the forefront of streamlined automobile design in the 1920s. He lodged his first automobile patent in 1921 and the following year he had built a series of prototype vehicles for Audi, Ley and Dixi. Unfortunately, none of the these radically new vehicles proved practical enough to go into production. In fact the negative reaction to the 'Ugly Ducklings' set back the streamlining movement almost ten years. Despite this failed experiment, Paul Jaray continued working on improving and refining his designs and in 1927 he founded Stromlinien Karosserie Gesellschaft in Switzerland and became a consulting engineer. 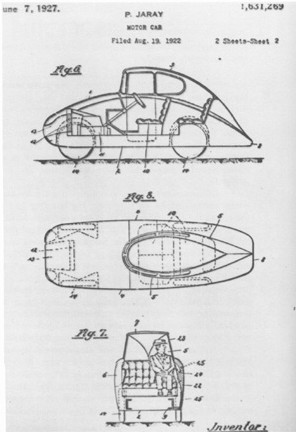 Paul Jaray's early streamlined car designs were clearly influenced by his work at Zeppelin and featured cramped seating and poor use of interior space.

By the 1930s automotive streamlining was back on the agenda and numerous car companies initiated experimental projects. Auto Union, the Saxon automotive conglomerate was again in the forefront of developments, with several interesting projects based on Paul Jaray patents. The company pursued two tracks - a traditional front-engined layout and experimental rear-engined project. 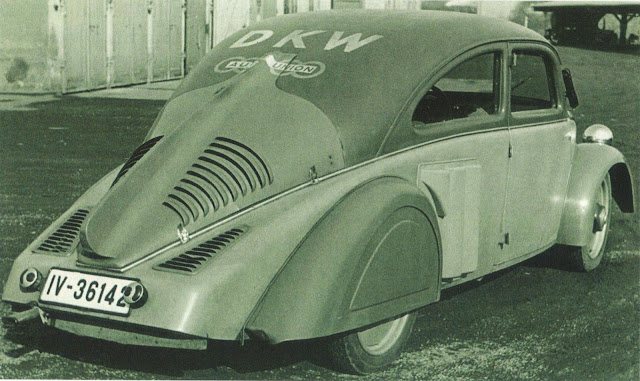 The rear-engined project resulted in a the construction of single research vehicle which borrowed some design styling from the Czechoslovakian Tatra T77. The rear-engine layout was not pursued, but the streamlined wooden bodywork was applied to the DKW Schwebeklasse of 1935. 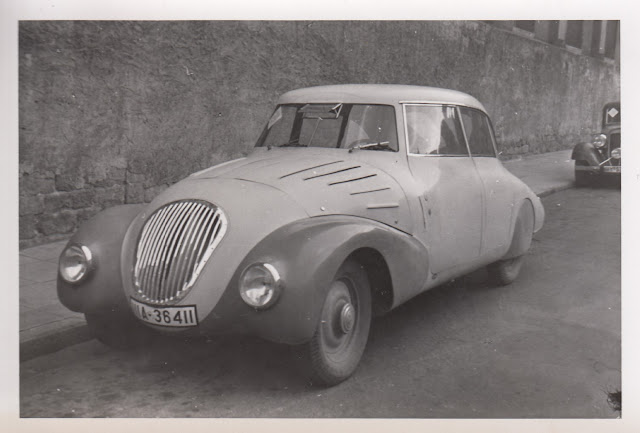 The front engined Jaray prototypes were an improvement over the 1921 experiment. Several examples were built, including this Audi model above. 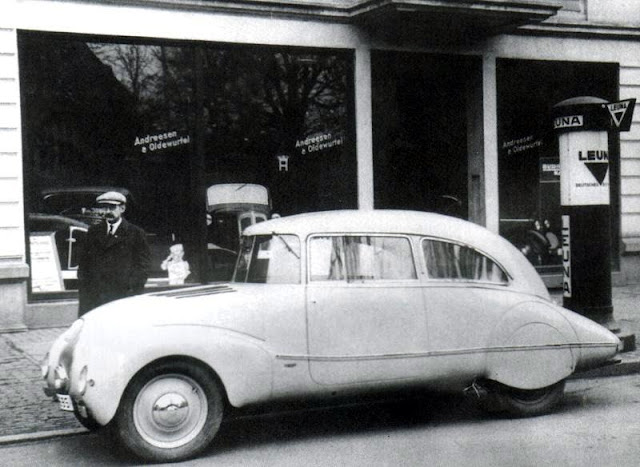 In 1935 DKW fitted a Jaray patented streamlined body to an F5 Sonderklasse. The result was a handsome, modern looking vehicle with fully enclosed wheel arches and headlights. The body was built by Hornig-Karosserie. 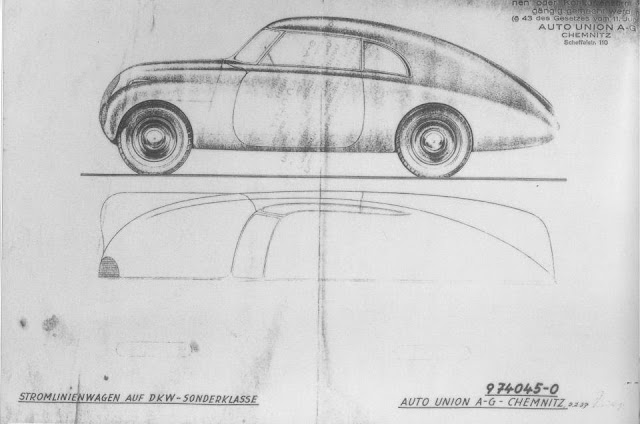 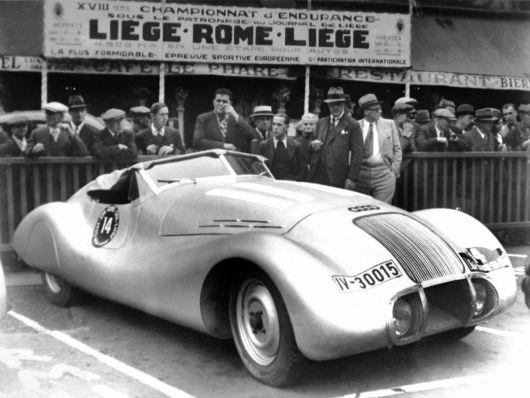 With a successful concept in hand, Auto Union returned to motorsport in order to develop the design further. For the 1938 Liege-Rome-Liege endurance race, Wanderer constructed three streamlined racers. The cars were something of a hybrid, combining Wanderer's W-24 chassis, mounting a DKW schwebeklasse floating axle and powered by a 2 litre W-25K engine with triple carburetors. The engines were not supercharged however and rated only 40 horsepower, but the aerodynamic effect of the lightweight aluminum bodywork delivered the cars the performance equivalent of 70 horsepower. Although the cars had a top speed of 160 kilometres per hour breakdowns prevented any of the cars completing the race. 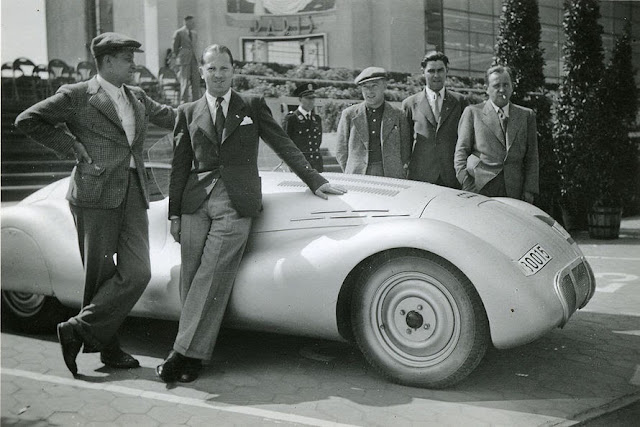 The cars performed better the following year with better tuned engines. One car tying for 4th and another gaining 11th position. 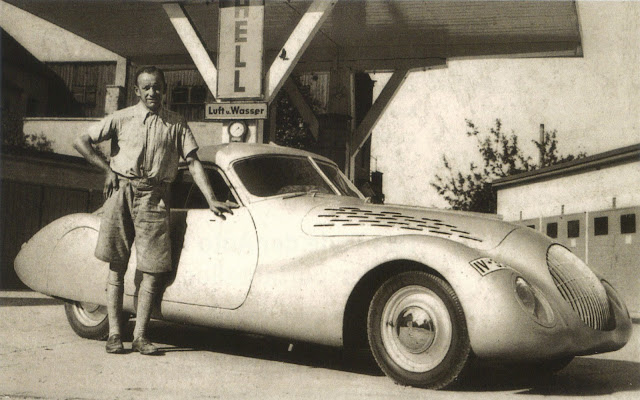 For the 1938 Berlin to Rome endurance race chief DKW designer William Werner fielded three streamliners based on the Wanderer design. The cars were fitted with 700cc four-cylinder twin-V engines with priming cylinders. Strikingly, these little engines delivered 40 horsepower - the equivalent power output of Wanderer's 2 litre engines - and could push the cars along at 140kph.

For the 1939 Berlin to Rome race the DKW team trialed different engines in the cars, including a tuned two-cylinder 700cc two stroke from the contemporary F7, the four-cylinder 1000cc engine of the DKW Schweberlasse and their new three cylinder 900cc engine. Further improvements were planned for 1940, but were put on hold by the war. 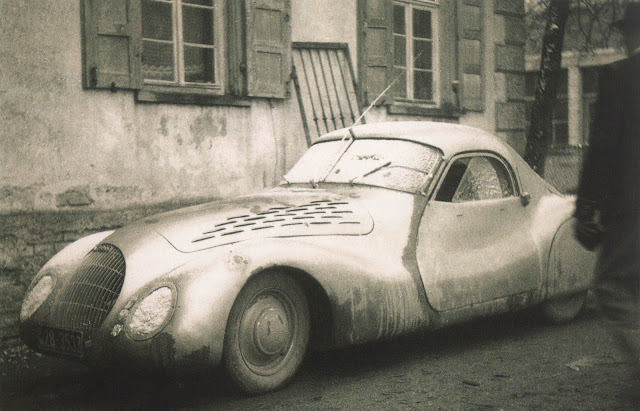 This DKW Rome-Berlin stromliner was photographed in Baden-Wurttemberg after the war but then disappeared.

Production Vehicles
Auto-Union's central design team in Chemnitz took the lessons learned on its streamlined endurance racers to develop a series of modern, streamlined passenger vehicles. The result was three exceptional machines, two of which never really made it passed the prototype stage and one that went on to become the foundation of DKW's post-war success. 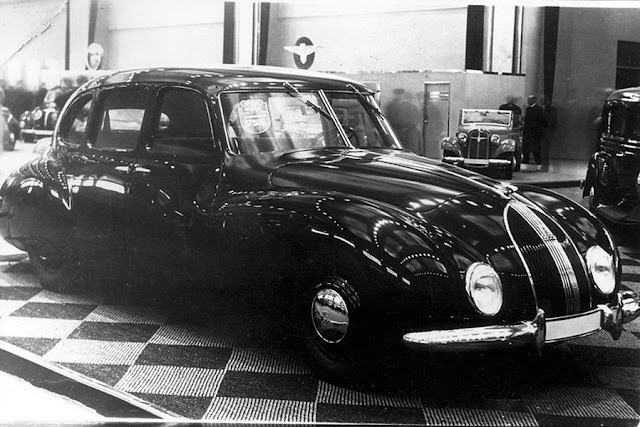 Horch unveiled its new luxury limousine, the 930S, at the Berlin Auto Show in 1939. Designed by Günter Mickwausch, Georg Böhm and John Hufnagel, the chassis was based on the 930V of 1935 and mounted a V-8 3.9 litre engine. The hand crafted bodywork was closely modeled on the DKW-Wanderer endurance streamliners of 1938. The car was a sensation, with all the luxury fittings, such as a fold out washbasin behind the front wheel, that were the trademark of the Horch brand. Performance tests on the Dessau racetrack clocked the 2300 kilogram car at 178 kilometres per hour. Only three cars were built before the war intervened. 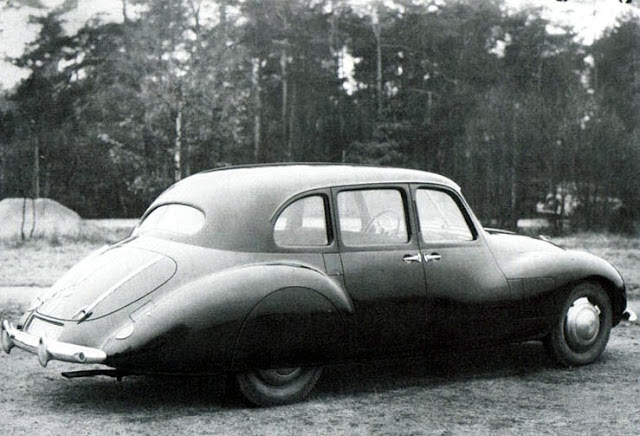 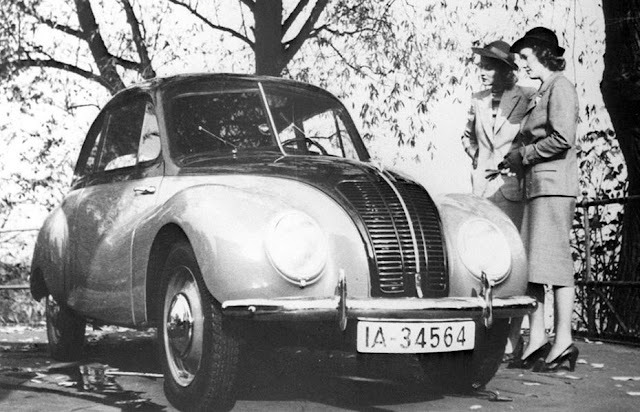 Meanwhile, over at DKW, William Werner's design team were working on a budget version of the design. The F9 Hohnklasse (high class) was also based on the DKW-Wanderer design and featured the new three-cylinder two-stroke engine. The car shared styling with the Horch 930S, which is especially apparent when the vehicles are viewed from the rear quarter. Ten pre-production examples were built before the war. http://heinkelscooter.blogspot.com.au/2012/12/1939-dkw-f9-prototype.html 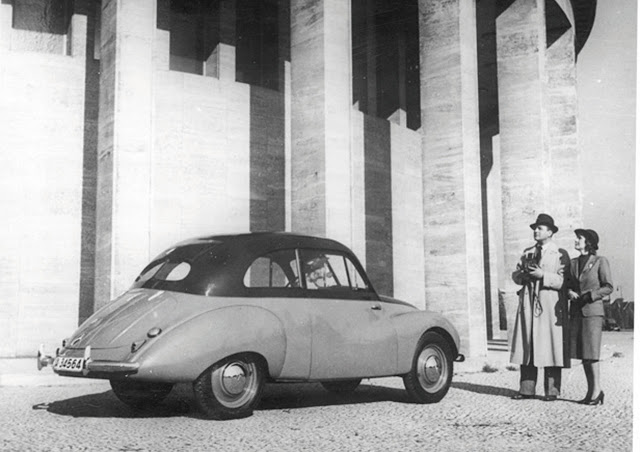 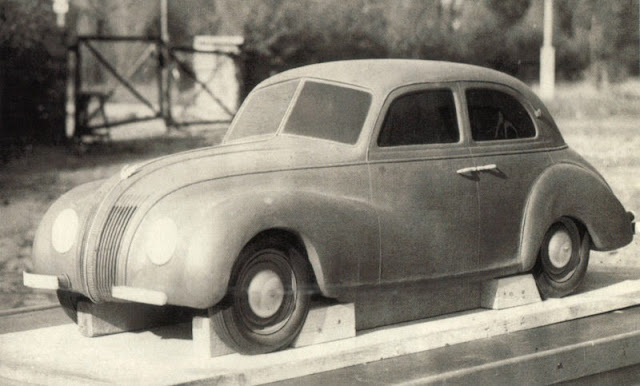 The ultimate aim of the 'Hohnklasse' project was to establish a single Auto-Union type which would have variants across the brands' market segments. The DKW F9 would be the budget, entry level version. A Wanderer version, powered by a Wanderer 6 cylinder engine, would be offered to the middle class  The car was originally designated the W-31, but was then renamed either the W-4 or W-6, depending on whether a four cylinder or six cylinder engine was installed. The car barely made it past prototype stage. A four door sedan and two door coupe prototype were built and presented in May 1939, before all further development ceased when all Auto-Union civilian car production shut down in 1940. 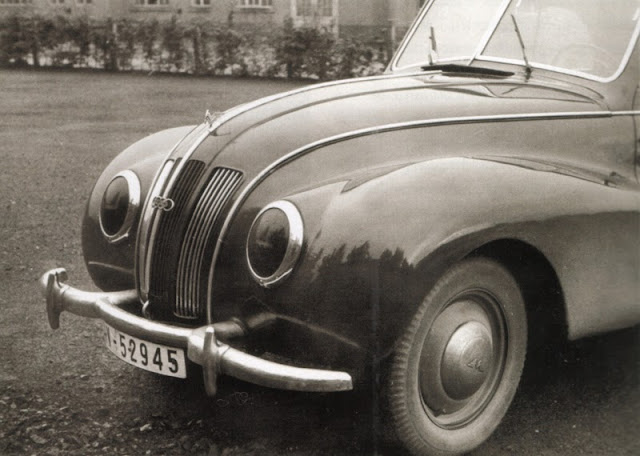 The War and its Aftermath
In 1940 Auto Union shut down its racing department and placed all the cars in storage. Amongst the horde were all six DKW and Wanderer streamline endurance racers, the Silver Arrows, and the AVUS record breaking car. When the war turned against Germany and Auto Union's factories came under attack, the collection was distributed to more secure locations. Some cars were moved west, while others were hidden in underground bunkers and mines. Despite this the cars were found and seized by the Soviets after the end of the war and shipped back to Russia for study. With assistance from Auto-Union engineers, a number of V16 racers were built and tested. After trials, the project was abandoned as the Soviets opted not to compete in the international Grand Prix circuit. The seized racers were originally intended to be scrapped symbols of Nazism, but several were sent for exhibition in Czechoslovakia and Latvia and escaped destruction. They were eventually put in storage and largely forgotten. After the Fall of Communism they disappeared in mysterious circumstances before eventually re-emerging and were recovered by Audi Tradition, who spared no expense restoring these extraordinary machines. 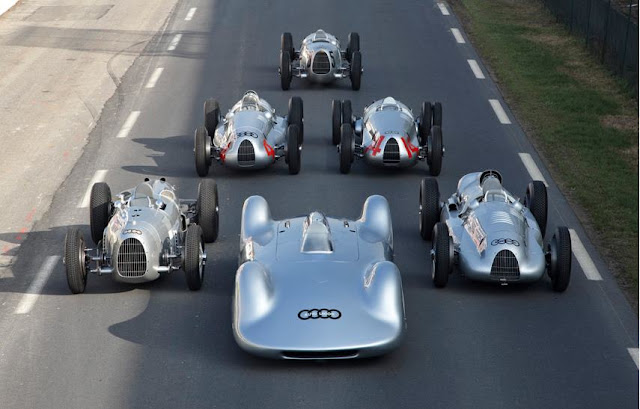 The Wanderer W-31 and the endurance racers, along with all plans and blueprints were destroyed during the war. A handful of photographs are all that remain. Audi Tradition decided to recreated the trio of Wanderer endurance racers as exhibition vehicles. Without blueprints or documentation for the original cars, these cars were modeled off original photographs with modern running gear underneath. 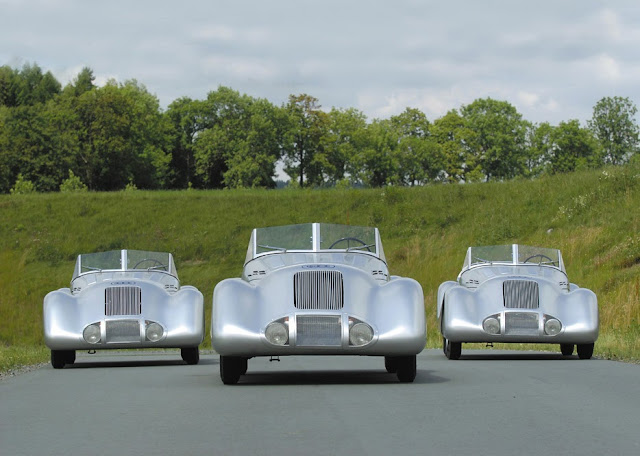 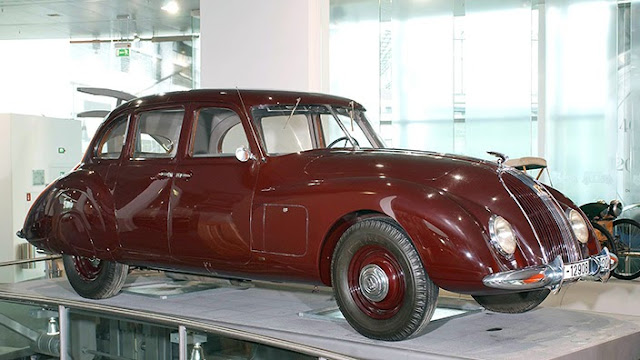 A single Horch 930S escaped destruction in hands of race driver Tazio Nuvolari, who took it to Switzerland. The car was returned to Germany after the war and was preserved by Audi Tradition in Ingolstadt. It now resides at the Audi Museum. The Soviets found six 930S chassis at the Horch factory at the end of the war and between 1948 and 1952 complete cars were constructed using spare and scrounged parts. The cars were distributed to Soviet and East German communist party officials, who were so pleased with the results that VEB, the East German automotive collective, officially commissioned Horch to build limousines. These were known as the Sachsenring P240 and the unique Horch 950S. One of each of these cars is on display at the August Horch Museum in Zwickau. 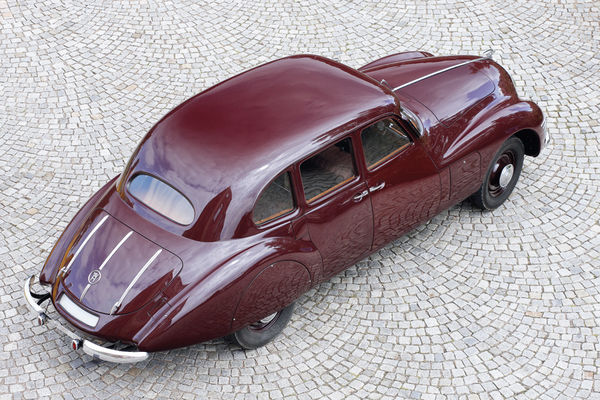 The surviving 1948 Horch 930S was found in Riga, Latvia and restored for the August Horch museum in Zwickau. The post-war 930S' had a different front end to the prewar models. 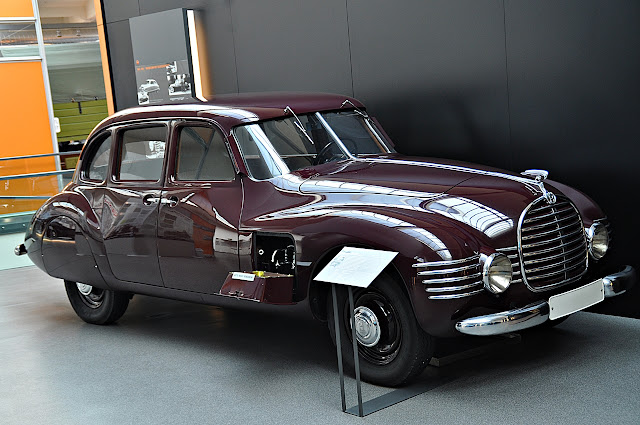 Only the F9 survived the war to be resurrected as both the DKW F89 in the West and the IFA F9. Although most of the car's blueprints were lost during the war, three examples survived. One complete car was found in Leipzig and became the template for the IFA F9. A body shell was found in Spandau and shipped to Ingolstadt where it became the template for the DKW F89. DKW however did not have complete car or engine, so the new DKW car used a modified F8 chassis and 700cc engine. The third car escaped intact, was commandeered by the British and later shipped to Australia, where it was later recovered by Audi Tradition. The F9, in all its guises, proved to be an outstanding success, both in the West and in the East. For more information see https://dkwautounionproject.blogspot.com/2017/07/dkw-germanys-post-war-wonder-car.htmlmanys-post-war-wonder-car.html and http://heinkelscooter.blogspot.com/2011/02/veb-sachsenring-east-germanys-peoples.html 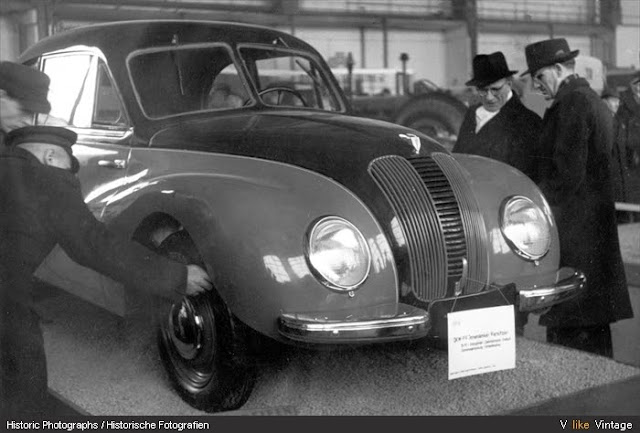 The first post war F9 is unveiled at the Leipzig Motor Show in 1949 by IFA. 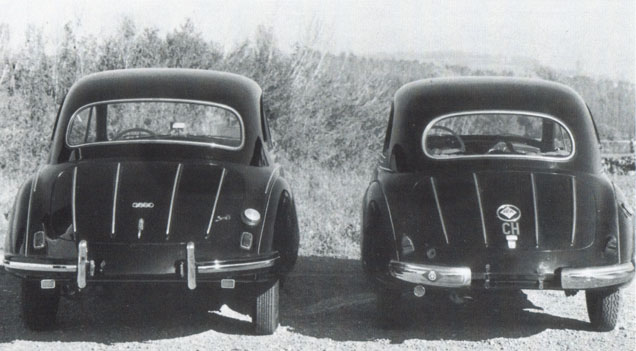 A DKW F91 and IFA F9 parked side by side highlights both their similarities and differences.