I have recently finished reading Ferry Porsche's autobiography, “Cars are my Life.” It's filled with interesting anecdotes about automotive development in the 1930s, the development of the Volkswagen and the Porsche and is a highly recommended read. Porsche once considered building a four seat sedan version of the 911, but ultimately decided against it. Expanding the car to sedan dimensions would have turned what was a perfect sports coupe into.... well, the equivalent of a modern Porsche SUV. Ferry Porsche knew what the company was about and never compromised his vision. 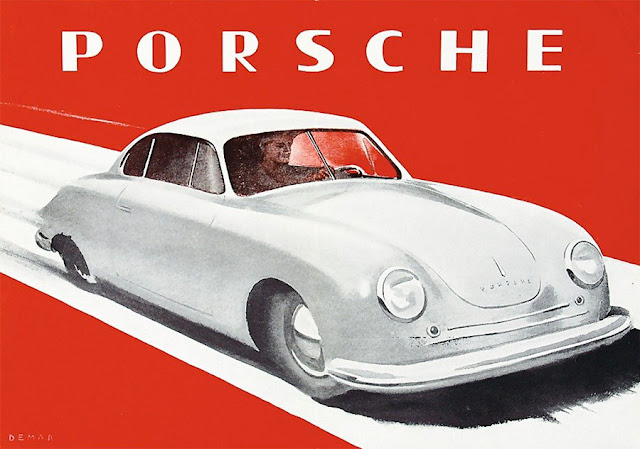 However, there was a four seater 'Porsche' but it had a surprising origin - East Germany. In 1954, twin brothers Knut and Falk Reimann we're working for the Lindner Karosserie Company in Dresden, East Germany. 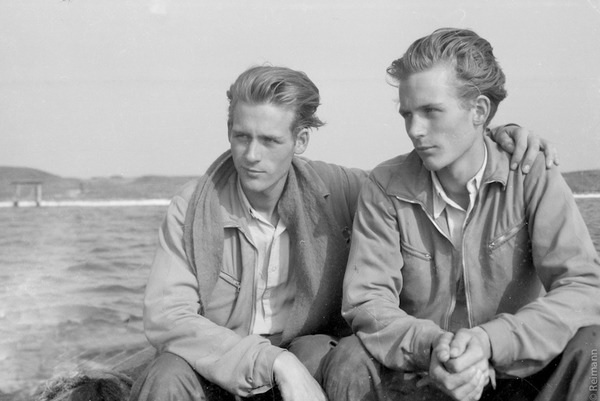 Before the war Lindner built custom car bodies but times had become tough in the post-war years. Transport was in short supply and just about anything with wheels and an engine, regardless of its condition, would be put into service. The brothers had found a military kubelwagen chassis in a nearby forest and although badly damaged with a body that was beyond repair, the brothers decided to savage what they could and build a new car from scratch. At this time East Germany was not closed off from West Germany and they had seen and admired Porsche's 356 and they determined to build a copy. 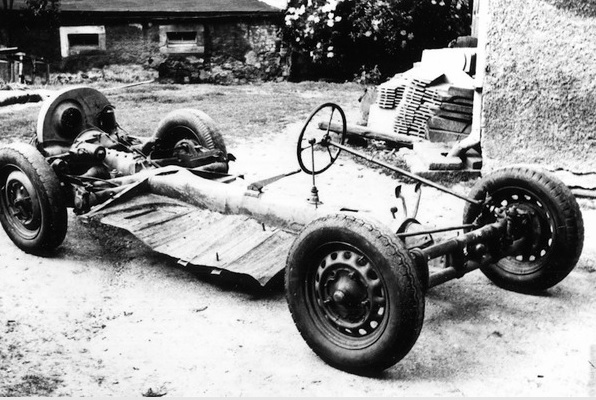 The Kubel chassis as found. It had been dragged out of a nearby forest.

Onto the kubel chassis they mounted an ash wood frame over which they fitted a hand beaten steel body. Sheet metal was in such short supply that they were forced to scrounge whatever pieces were they could find. 15 damaged Ford bonnets were used to build the mosaic patchwork of small hand welded panels. 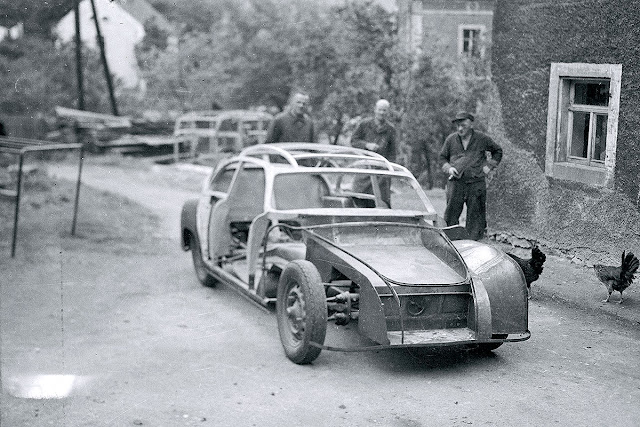 The car slowly comes together in the Lindner garage 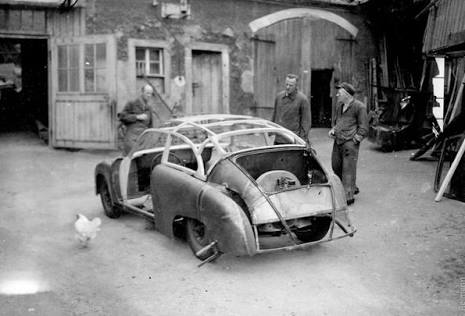 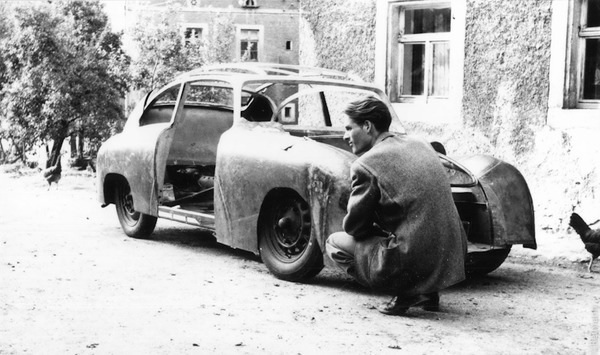 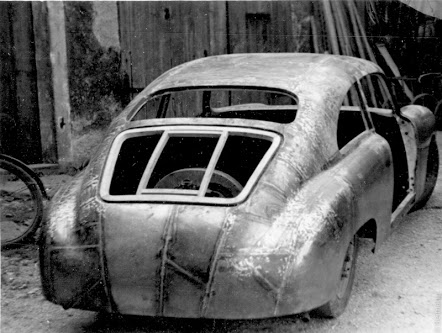 Give the brothers meagre resources, the car they completed in 1954 was quite stunning. They had replicated the 356s elegant curves perfectly, except being slightly wider and 30 centimetres longer. The Lindner Porsche seated four passengers in relative comfort. 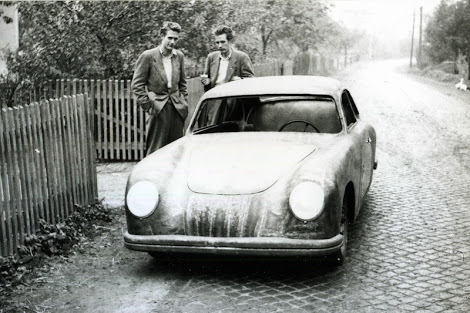 The brothers took the car to Porsche’s head office in Zuffenhausen where Ferry Porsche was invited to inspect it. When Porsche heard of the car his initial reaction was to quash this imitator, but after meeting the brothers and examining their work his irritation turned to admiration. Porsche donated a Porsche tuned 1100cc Volkswagen engine and other parts to the project. He also assisted the brothers with false registration papers and licence plates (to fool the GDR authorities) and allowed them to brand the car ‘Porscheli.’ The brothers then took the car on a journey through Europe exhibiting the car in Germany and Paris, where there was considerable interest. 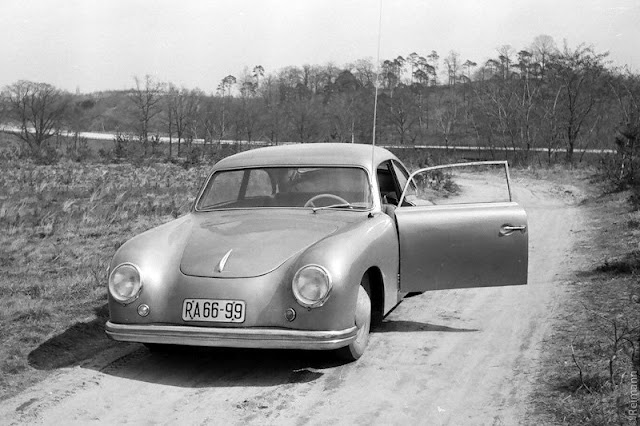 Porsche continued his clandestine assistance to Lindner and the Reimann brothers by smuggling Porsche parts across the East German border and Lindner built another 13 examples of the 'Porscheli' for East German customers before they ran out of donor cars and production came to a standstill. 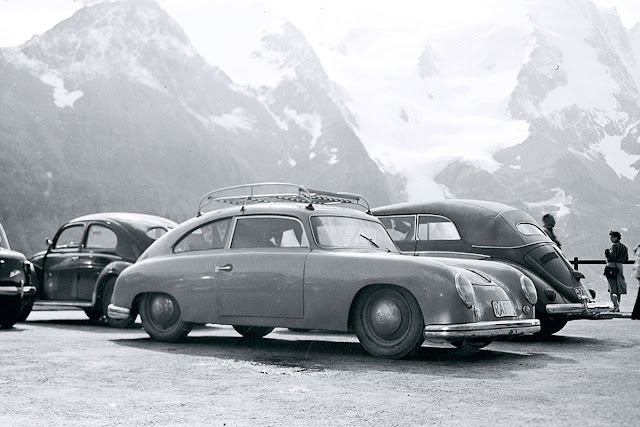 The Reimann brothers’ adventures also came to standstill in 1961 when they were arrested trying to flee to the west. After being imprisoned for one and a half years the twins went their separate ways, settled down and never returned to the car business. 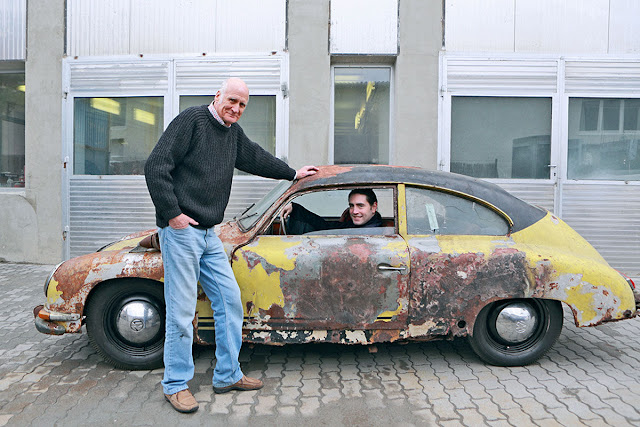 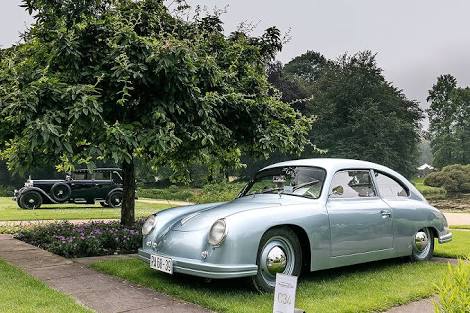 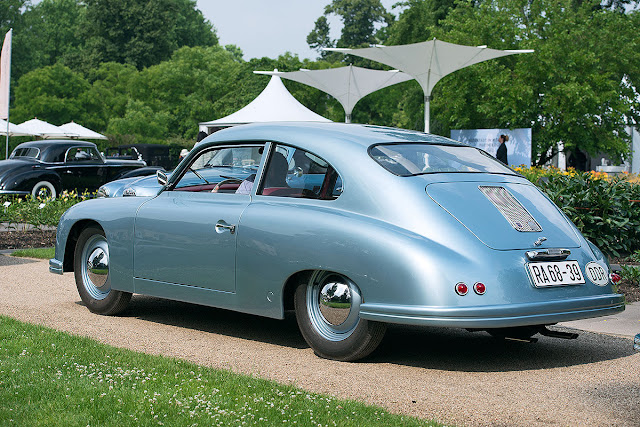 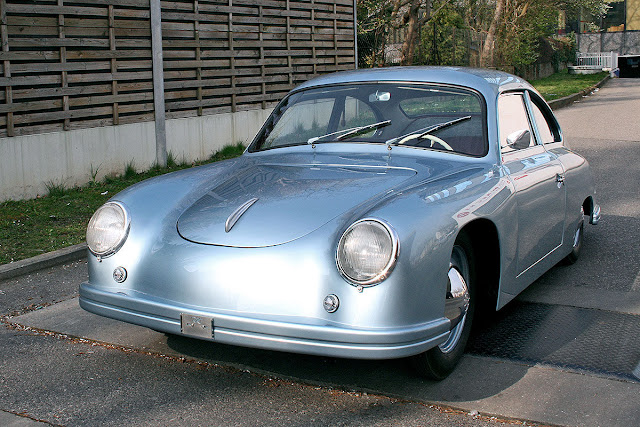 Posted by Paul Markham at 1:54 PM No comments: