The development of the safety bicycle and triporter in the late 19th century was a significant improvement over the handcart. Then, in 1905 the German Brennabor company took the obvious step of placing a small petrol engine on a triporter to create the motorised delivery tricycle. It was an outstanding success and copied by dozens of companies across Europe. 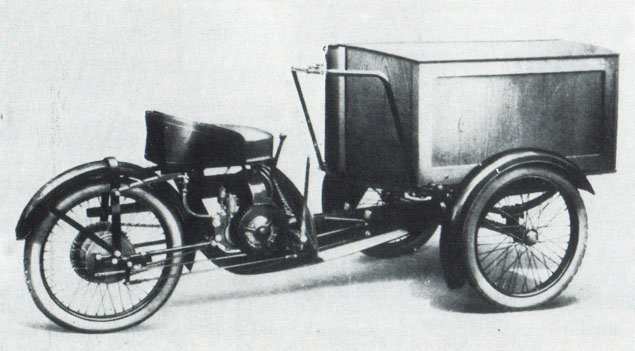 In 1920 in Bremen, Germany, a young and ambitious engineer named Carl Borgward founded a small factory to manufacture car radiators and mud guards. It was a very small venture and Carl was always on the lookout for means of improving productivity. After receiving a complaint from one of his employees about the amount of time wasted delivering components by handcart, he designed a simple motorised cart powered by a 2 horsepower two-stroke engine. The cart was simplicity itself - it had no starter, clutch or gears. The driver simply pushed the vehicle to start it and jumped on as it chugged away. To stop, the driver switched off the engine. It only had one gear - forward! 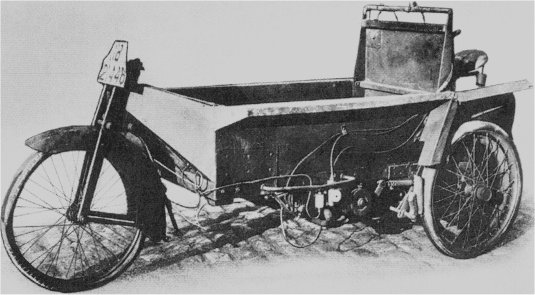 The 'blitzkarren' or lightening cart was originally built solely for use in Borgward's factory but it clearly filled a niche as soon Borgward was fielding queries from other factory owners where they could get one, so Borgard decided to begin building carts to sell. With an ironic sense for marketing Borward named the tiny cart "Goliath." Selling for 980 Mark, the blitzkarren proved to be a hit and laid the foundation for what would later become the Borgward auto empire. 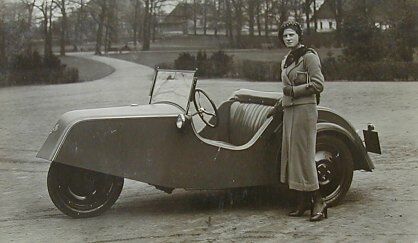 Borgward was never going to be happy manufacturing auto components and a basic delivery cart. He wanted to build cars. His first designs were far too complex and expensive for his tiny company so he sold them on to the Hansa car company. But the success of the blitzkarren, which Borgward had been improving over the years, gave him enough capital to begin building a car of his own and in 1931 Borgward released his first car - the Goliath Pionier. The Pionier built on the success of the blitzkarren tricycle design. It was powered by a rear mounted JLO two-stroke engine of either 200cc or 250cc capacity which gave it a maximum speed of approximately 30 to 35 miles per hour. 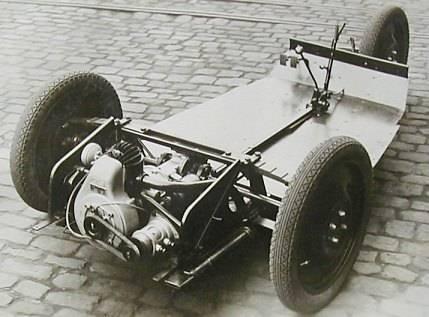 The car was very simply constructed. A steel plate floor sat atop a steel frame chassis. Its semi-streamlined wooden framed body was paneled in plywood covered in leatherette. 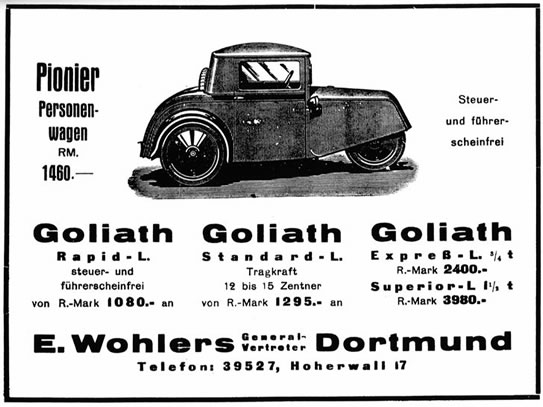 The car came in a variety of body styles, such as sedan, roadster, hard and soft tops. Prices ranged from 1080 Deutschemark for the basic model right through to 3980 DM for the delivery truck version. The Pionier was in production from 1931 until 1935 and some 4,000 examples were built. 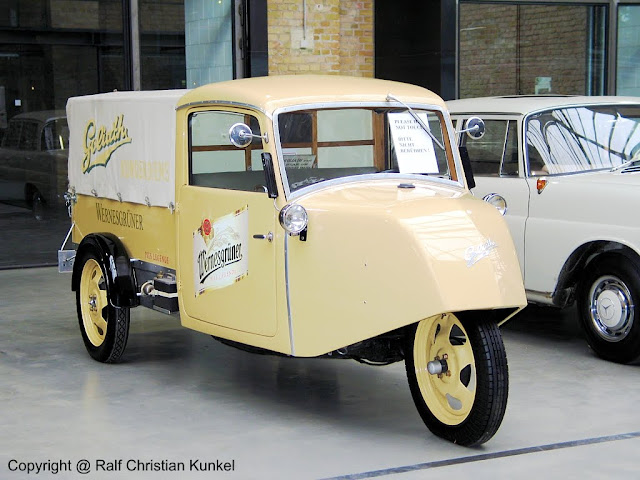 Although the Pionier was retired as a passenger vehicle, Goliath continued manufacturing delivery tricycles right through into the late 1950s.

The Goliath's success during the hard years of the Great Depression allowed Carl Borgward to buy out the struggling Hansa and Lloyd car companies, which formed the foundation of the Borgward company. 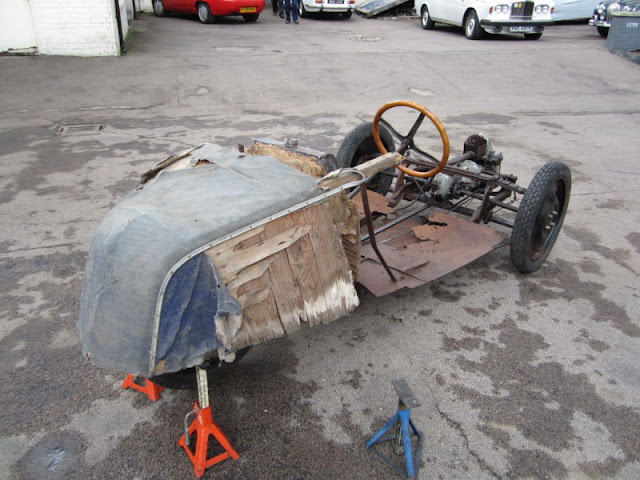 Due to their simple construction, very few Pionier's have actually survived. Additionally, unlike more traditional budget cars, like the contemporary DKW F1, the Pionier tricycle quickly became obsolete and were abandoned. 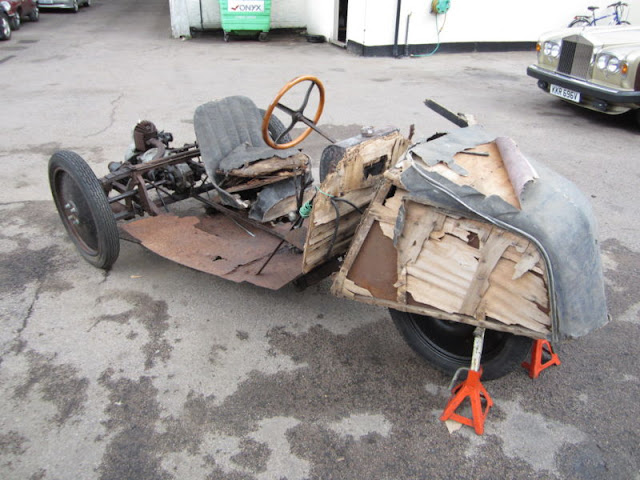 This rather poorly preserved example came up for sale in early 2012 in the UK. Almost all the bodywork has rotted away and the rear of the steel floorplate is in very bad condition. 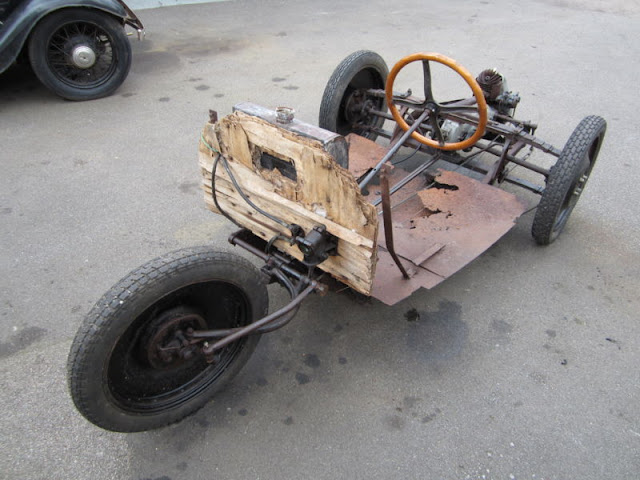 That said, almost all the mechanical parts are there and in reasonable condition. 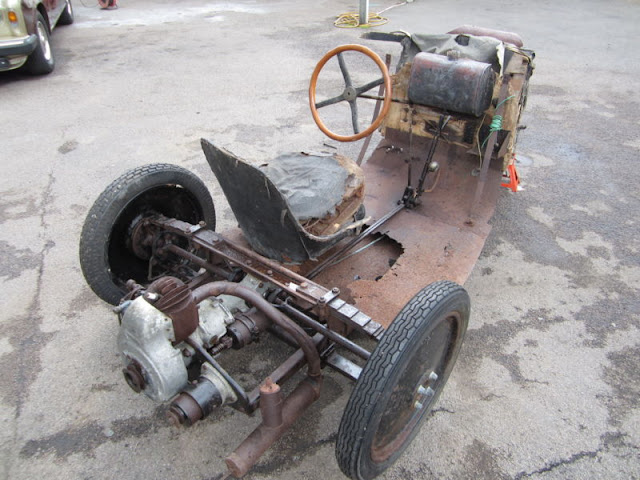 All up, I think this looked like a reasonable basis for a restoration. With all the critical parts there, it seems to be a matter of replacing the floor plan and installing new coachwork. Okay, I am oversimplifying things a little! 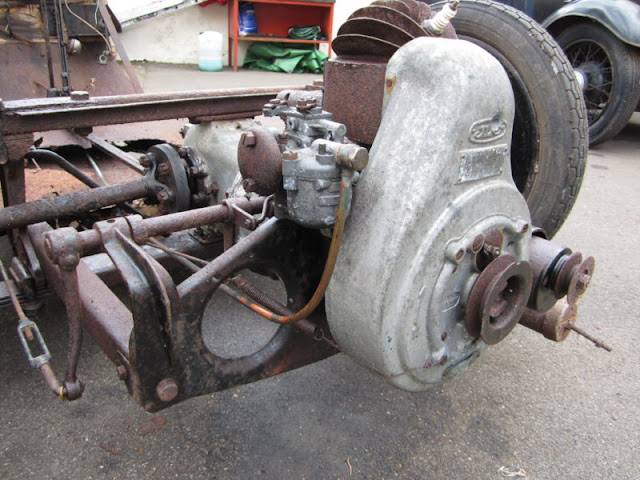 The JLO engine is virtually complete and turns. Some belts are missing. Note also the excellent condition of the underlying chassis. 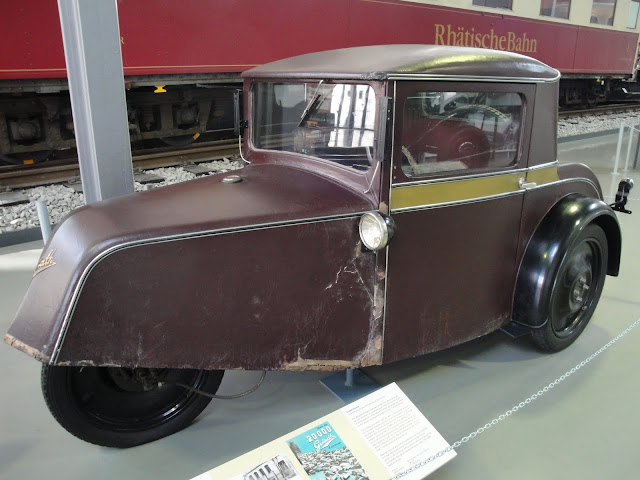 The Goliath Pionier sedan we photographed in the Munich Technicmuseum in 2006.
Posted by Paul Markham at 8:14 PM