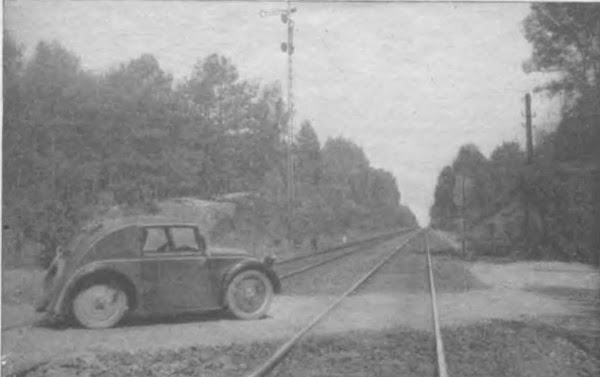 The Standard-Superior is a representative of a vehicle type that has only ever existed once [before] in the Hanomag “Wanze” (aka bug), which died out after only a short production period. One can describe the vehicle as a small four-wheeled "only two-seater car". This term needs definition as there were quite a number of 200cc, three-wheel, two-seater, tax- and license-free cars at the [1933 Berlin Motor] show. However, I would like to exclude these wagons from all comparative considerations, without wanting to misjudge in the slightest their great economic importance within the existing legislation. They are stopgap measures brought about by faulty legislation. 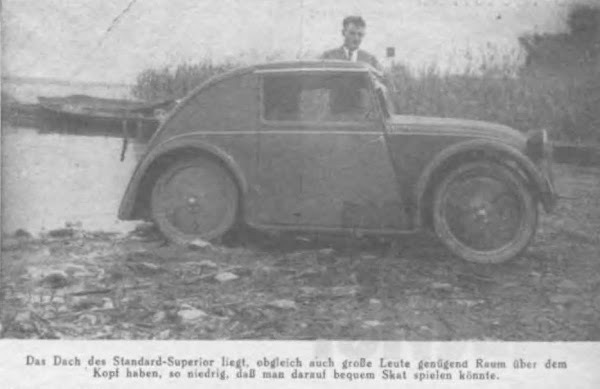 They fulfill the task assigned to them in an admirable way within the narrow framework that the law allows them; they will exist and serve their purpose as long as the law exists that administratively subordinates them to motorcycles, and they will probably cease to exist when the legislature has freed the designer from these shackles. After that, the ratty little "two-seater only" car will remain. The definition of the term should therefore contain the following requirements: The chassis of the car must be designed in such a way that it is comfortably sufficient for transporting two people. And secondly, the performance of the engine and chassis must meet all the requirements that are reasonably expected of a means of long-distance road transport today. You can even express these requirements in numbers. According to the conditions of the 2000 km trip, which the AvD and the NSKK advertised, the average travel speed on closed roads must be at least 60 km per hour. 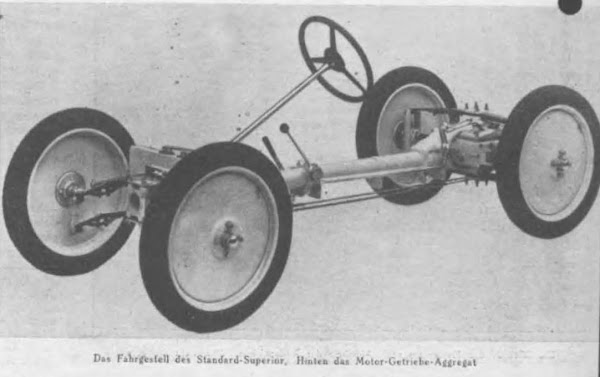 In this case the Standard Superior meets these conditions. His top speed was clocked at 76.3 km per hour. That's just as much (and just as little) as all other four-seater small cars with sub-1000 ccm engines that have been tested by the "Motorrad" recently. The strong two-cylinder-two-stroke engine with oiling via the petrol mixture, provided the elasticity, power and hill-climbing ability demanded by every good small car. The suspension, steering, center of gravity and weight distribution are also solved in an absolutely flawless form that does justice to modern automotive design, so that only an insignificant reduction in speed is required when travelling over bad roads, in town crossings or on sharp bends. On closed roads, a speed of 60 km per hour can therefore be easily reached. 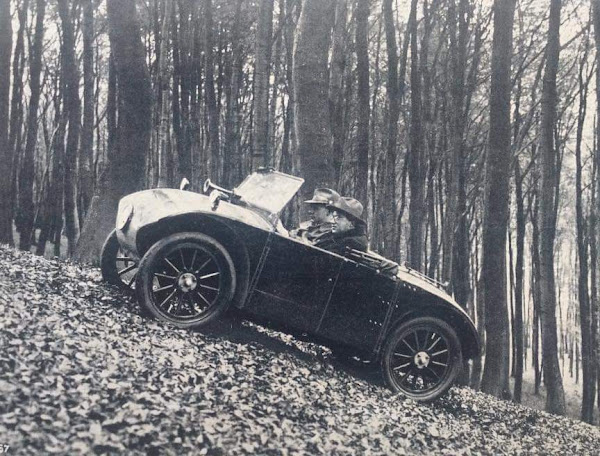 Of course, you couldn't do that with the Hanomag Bug, but it must not be forgotten that nine years have passed since the construction of the little Hanomag; nine years in which the requirements that one has to make of a motor vehicle have been fundamentally revised. From this point of view, it must be reiterated: the Hanomag "Bug" was the first "two-seater only" car that existed, and the Standard Superior is the second. Now, the short-lived success of the Hanomag was killed prematurely by a completely wrong pricing policy. You can tell by the fact that the little "Bugs" are still sought like ‘hotcakes’ after nine years, despite their technical obsolescence. The right "two-seater only" is still needed and the decisive factor for success is whether the price can be kept at the right distance from the small, powerful four-seater or two-seater/four-seater class.

Interestingly, the designer of the Standard Superior, Dipl. Ing. Ganz, of Frankfurt am Main., continued the tradition of the old Hanomag, of course with a leap of nine years of improvements in automotive technology. With all the idiosyncrasies of this construction, Dipl. Ing. Ganz has woven all the ideas that he has passionately represented for years, the connection to the old Hanomag still cannot be denied. The arrangement of the seats right between the wheels, the front independent wheel suspension, the rear engine and the lack of differential with a narrowed rear track are the fruit of Bohler's work. With a longer wheelbase, moving the engine forward of the rear axle, a modern two-cylinder two-stroke engine, central tubular frame, four-speed gearbox, split direct steering and oscillating drive semi-axles, the properties to meet all of today's requirements were achieved with a leap over nine years of development. 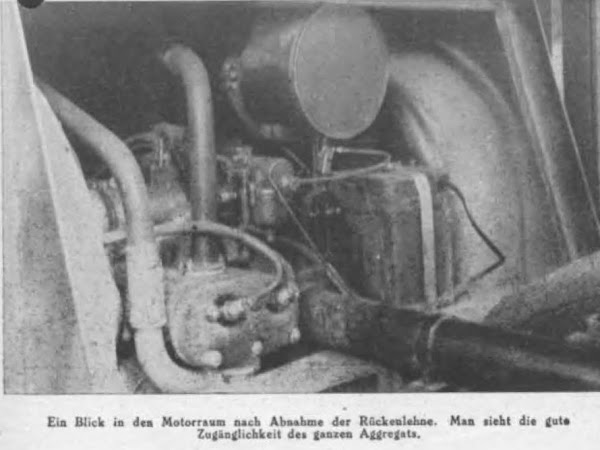 On the test drive the car was thoroughly checked; he had to show what he was capable of. Full speed on a good road of over 60 kilometres per hour is justified. [Fuel] consumption of the Standard Superior can be given as 7 to 8 litres of petrol mixture, depending on the type of use. We drove with normal branded petrol to which Mobil oil SS (extra heavy) was added in a ratio of 1:20. The use of particularly heavy oil appears necessary, despite the water cooling.

Bosch 175 spark plugs suffice for normal driving; if you handle the car very sharply, it is advisable to use the Bosch 220. Because of Selner's special form, a few more words must be devoted to the structure than is otherwise the case. To get straight to the point: we don't want to pass judgment on the beauty of the car; not because we find the shape of the car ugly, but simply because the shape is unusual and therefore a matter of taste. We only want to judge the comfort and practicality of the body. 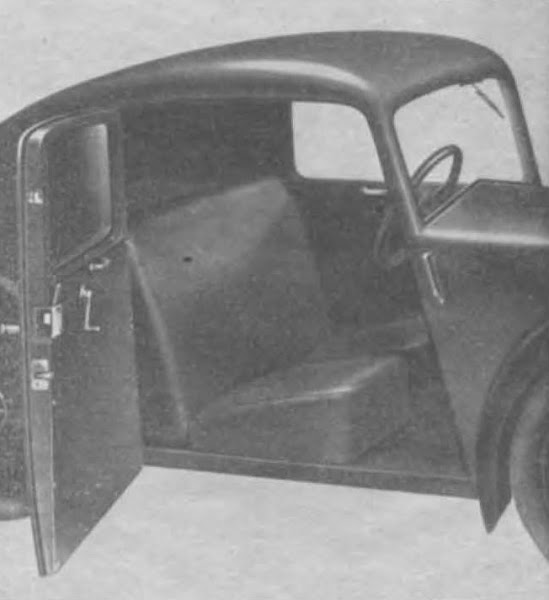 Convenience is out of the question. In terms of length and width, it offers people of large ‘calibre’ sufficient space. The front wheel arches [intruding into the floor space] force you to sit at an angle, so that the driver no longer has the steering wheel in the middle, in front of his head, but you quickly become accustomed. As far as this is possible with such a low construction, single steps are free and comfortable thanks to the long wheelbase and the two wide doors. Accessibility for entering the machine is also good. For cleaning, it is possible to simply hose down the car not only on the outside but also on the inside. Everything is impeccable and right for such a plum. 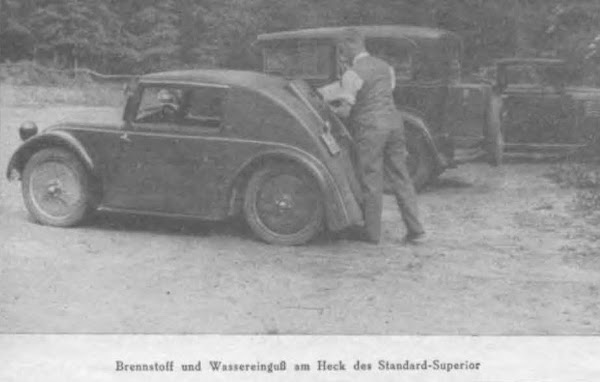 On the other hand, one can be quite divided about the expediency of the form. The streamlined shape of the car does not provide any power-saving effect, and secondly prevents the car being developed as an open car or as a cabriolet. The first issue is simply "no advantage", but the second is an actual disadvantage. One solution would be very simple to implement - see our drawn suggestions below.

The radiator is currently mounted diagonally above the engine, where a windproof pocket peeks out of the curved back. Why not remove the radiator from this spot and place it at the front of the car, as it is with other cars and where it can be more easily cooled by the airflow? Two gas tubes – costing no more than 1-RM a piece - running along the frame tube can form the connection from the front to the rear. The rear end then only contains the flat engine unit, so that the rear body of the car can be carried up the window height as a smart open car with a snappy radiator front and given a cabriolet roof or a simple rain cover, as required. 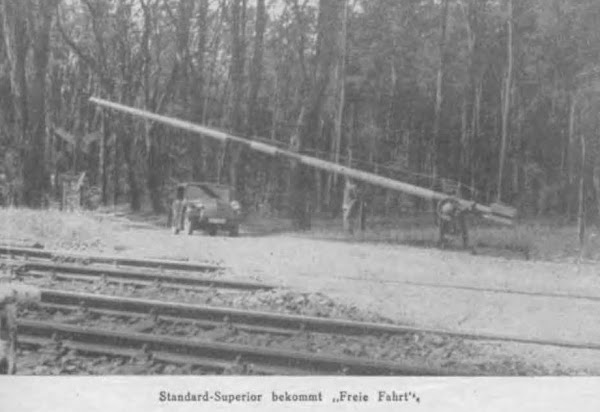 Request to the Standard-Werke, Ludwigsburg, "how about that?" 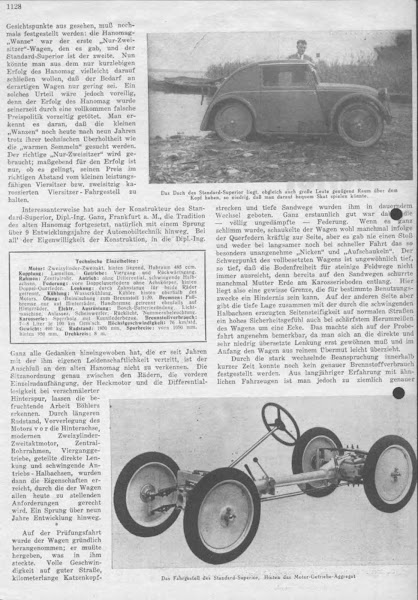 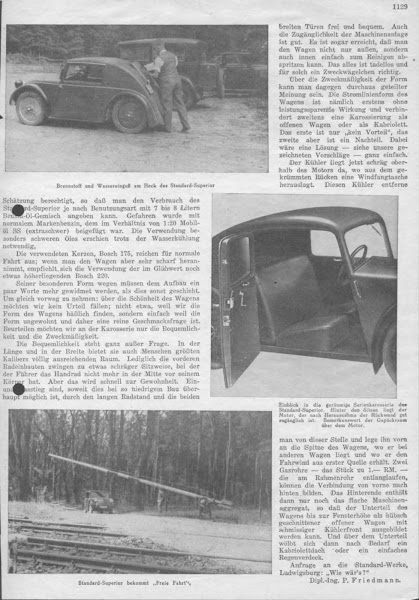 Commentary:
Context is everything. The Standard Superior was an interesting small car development of the early 1930s at a time when vehicle ownership was well outside the reach of the average person in Germany. Thanks to legislation which exempted three-wheeled, low-powered microcars from road taxes and drivers license requirements, there was a small niche market for 'klienst-wagens'. In 1933 these exemptions were extended to four wheeled microcars, resulting a plethora of examples appearing at the 1933 Berlin Motor Show. Engineer and Motor-Kritik editor, Josef Ganz was microcar enthusiast and he licensed his designs to the Standard-werke of Ludwigsburg, a motorcycle and agricultural machinery company. The result was the Standard Superior.

The Standard Superior packed a number of cutting edge (for the time) features, such as a tube chassis, independent suspension, rear-mounted engine and rudimentary streamlining. These features have all been claimed by modern authors as revolutionary features and the 'true' origin of the Volkswagen Beetle, designed later by Ferdinand Porsche. Contemporary observers however, did not see it that way. In this test drive and critique by Dipl. Ing. P Friedmann of 'Das Motorrad' (The Motorcycle), calls out Ganz' design as a continuation of the earlier Hanomag "Bug". The small Hanomag PS2/10 went on sale in 1924 and reintroduced the idea of a rear mounted engine. The choice of mounting the engine in the rear was one of cost reduction and technical simplification - no heavy driveshaft was required and the weight of the small engine directly over the rear axles improved traction.

Friedmann rightly observes that the Standard Superior as the successor to the Hanomag Bug, with nine years worth of technical improvements added. Interestingly, another contemporary review in Motor und Sport (here: https://heinkelscooter.blogspot.com/2022/08/1933-standard-superior-technical.html) observes that many of the technical features of the Standard Superior have been lifted from the small Tatras. These were the front engined Tatra T12 and its successors designed by Hans Ledwinka. Josef Ganz owned at various times both a Hanomag Bug and a Detra T12 and wrote glowing reviews of both in the Motor-Kritik. Ganz' experiences with both vehicles led him to adapt their (pre-existing) technical features for his own designs. There was nothing 'plagaristic' about this per-se, engineers will always observe the developments of others and adapt what works best to their own ends.
https://heinkelscooter.blogspot.com/2015/07/the-tatra-versus-volkswagen-lawsuit.html

What is important to observe in these contemporary reviews is the negative aspects of the designs. Clearly Friedmann was not convinced by the semi-streamlined body of the original Standard-Superior (the body was substantially redesigned and improved for 1934). He was quite right to observe that it did not embue the vehicle with any advantages in wind-resistance, but offered notable disadvantages in terms of passenger space. The Standard Superior Mark I was very cramped for two passengers (as was its contemporaries, the Framo Picollo and Hansa 400, a little less so). The Mark II improved the situation a little, but it was still a very small car. One may make a similar critique about the Volkswagen Beetle too as the body design did limit headspace for the rear passengers, however, the Beetle was a real, full-size car and a substantially different proposition than the tiny Standard Superior.

And here is where the claims that the Standard Superior is the true origin of the Volkswagen Beetle fall flat. Both vehicles are based on similar technical features - central chassis (not a tube in the case of the Volkswagen), rear engine, independent suspension, streamlining. All of these features were developed by others long before they appeared in the Standard Superior and Volkswagen. Both Ganz and Porsche were adapting pre-existing features. Porsche didn't need to look at Ganz's work to design the Beetle. He obviously did observe Ganz, and Rasmussen, and Carl Borgward and Hans Ledwinka and distilled what he observed. This is clear from Porsche's Volkswagen Manifesto on 1934, when he discounted all the developments in the 'klienst-wagen' field and insisted that a true 'People's Car' must be a true car, not a wood and leatherette, motorcycle engined 'half car.' That is where Porsche differed from his contemporaries. https://heinkelscooter.blogspot.com/2021/02/the-volkswagen-manifesto.html

PS. It's interesting to note that the Hanomag PS2/10 "Kommisbrot" (army loaf) is called the 'Bug' in Friedmann's review. Obviously Ganz did not invent the term 'bug' or 'beetle' as so often claimed.