BMW Isetta - the Saviour of the Company 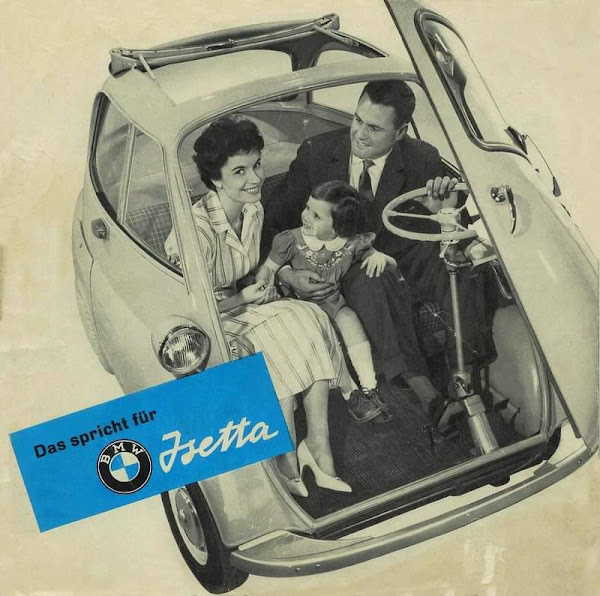 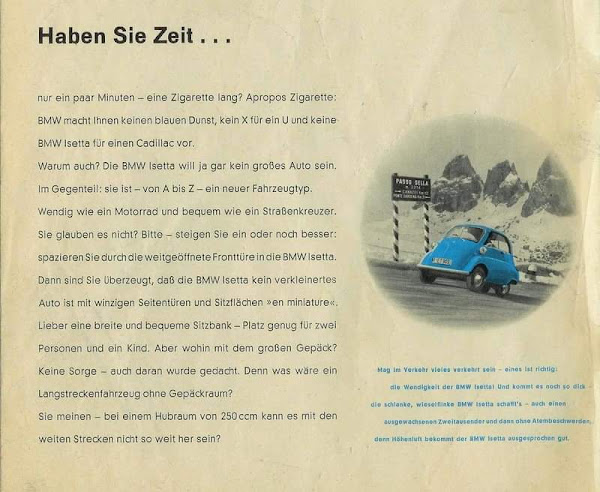 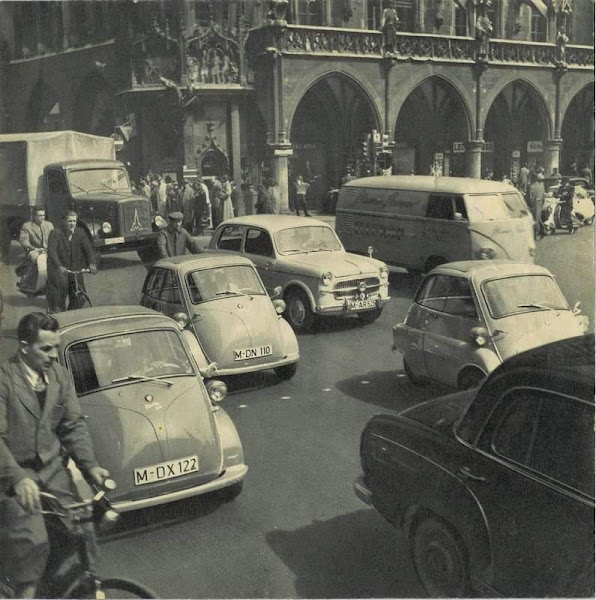 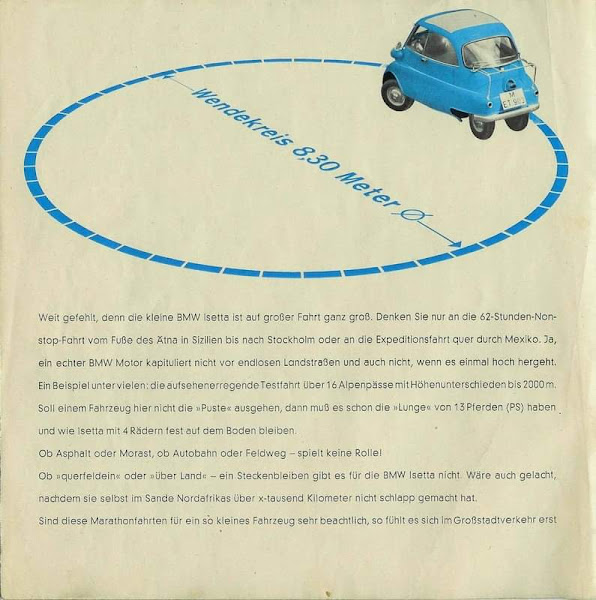 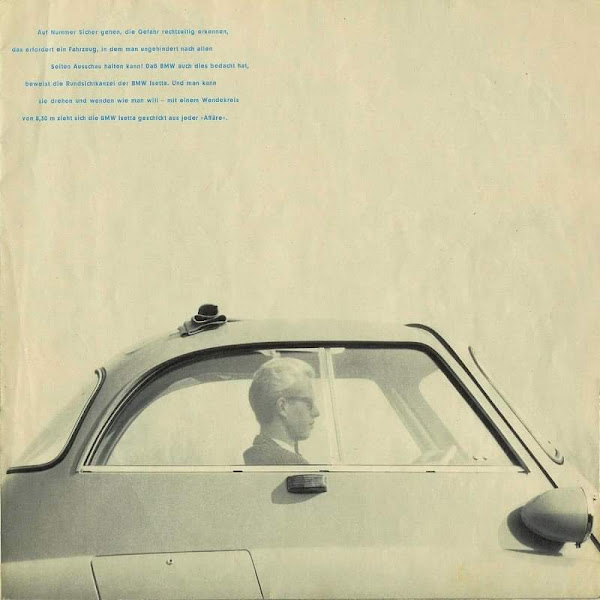 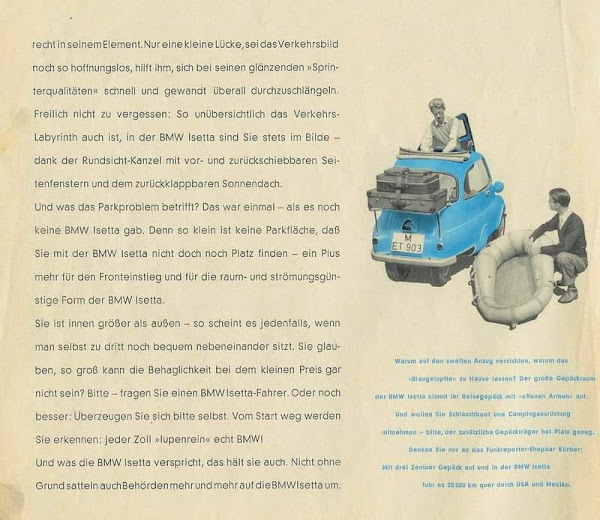 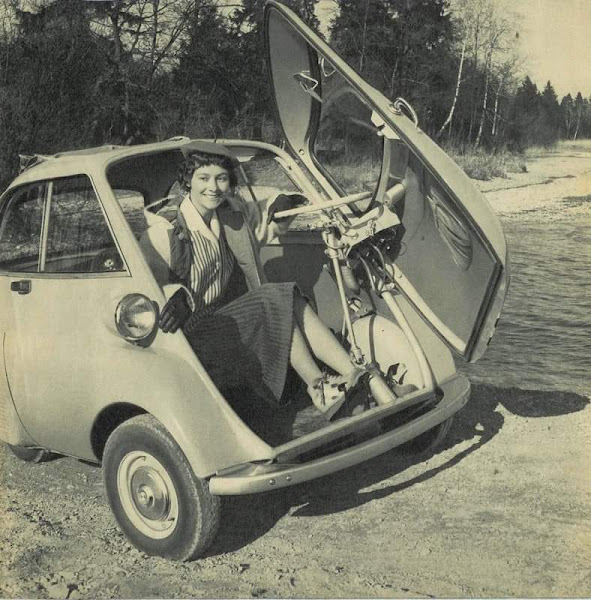 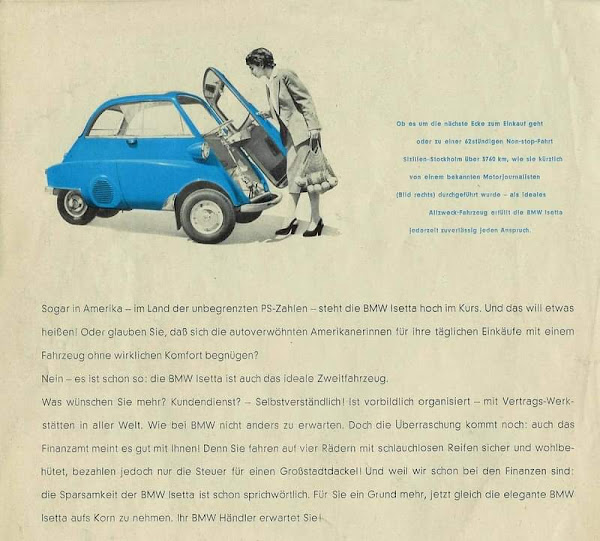 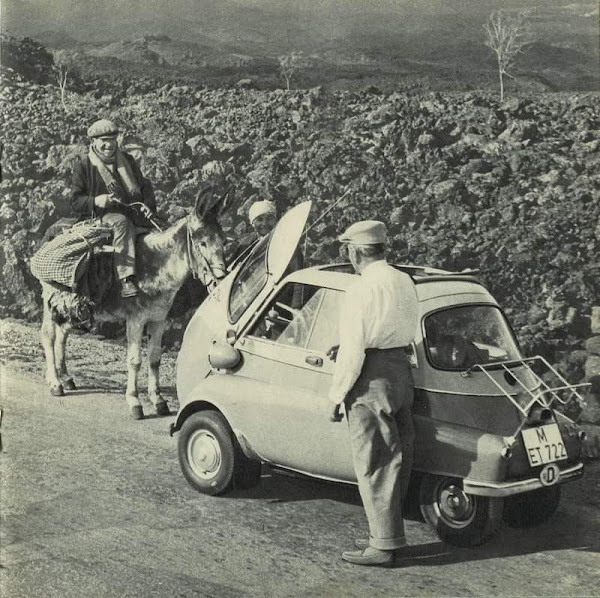 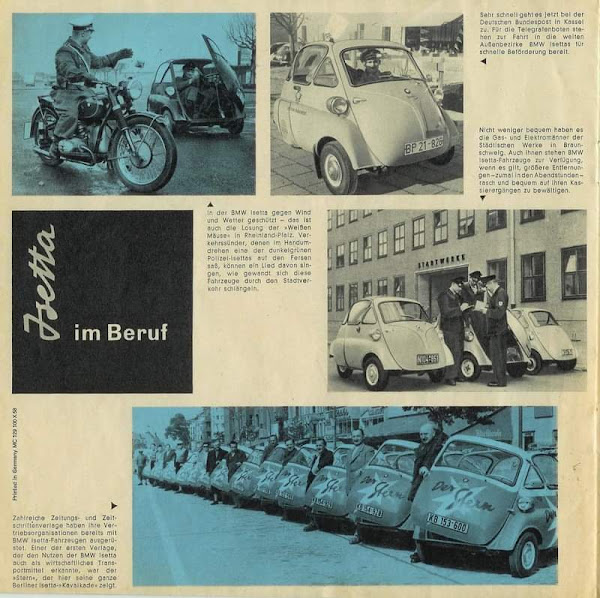 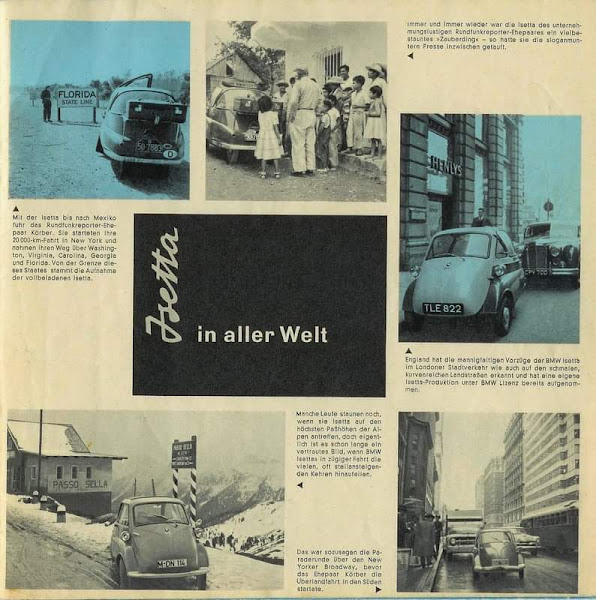 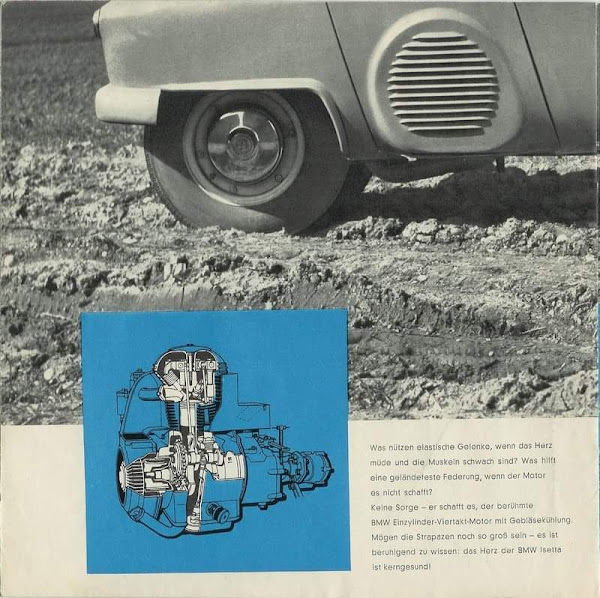 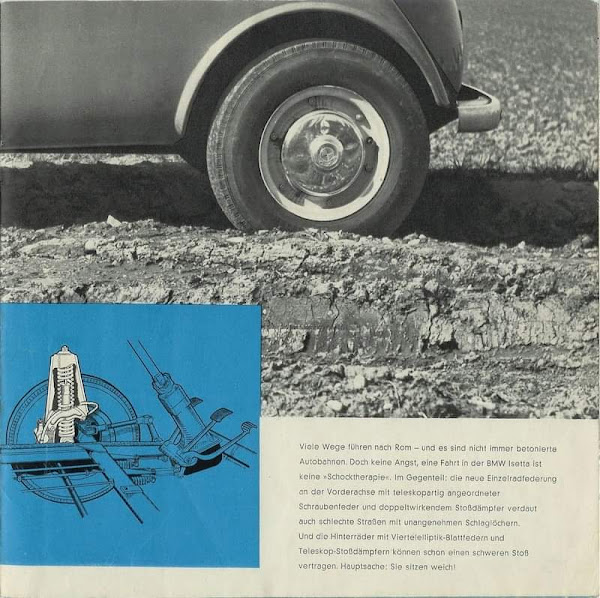 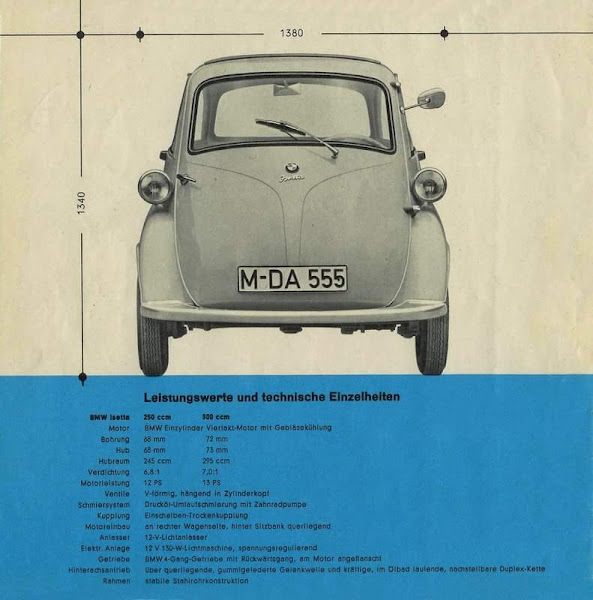 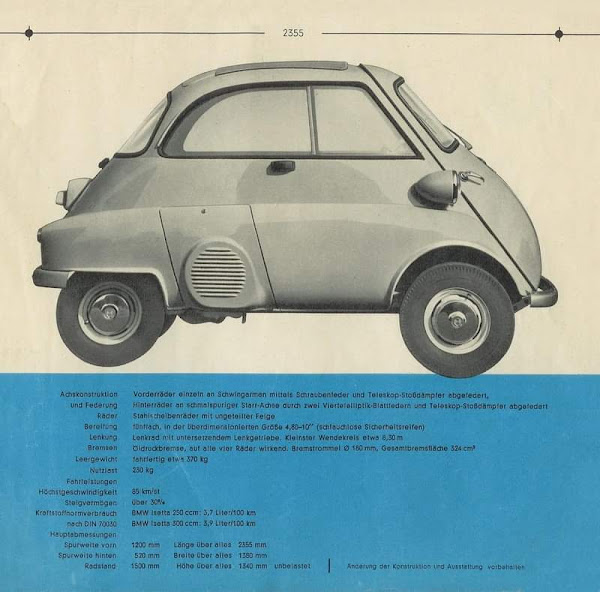 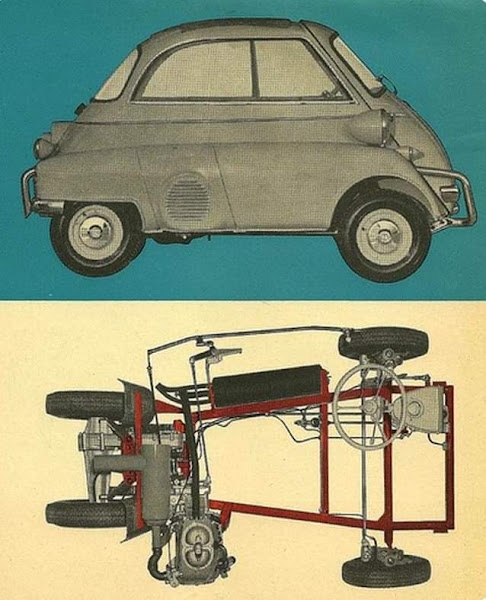 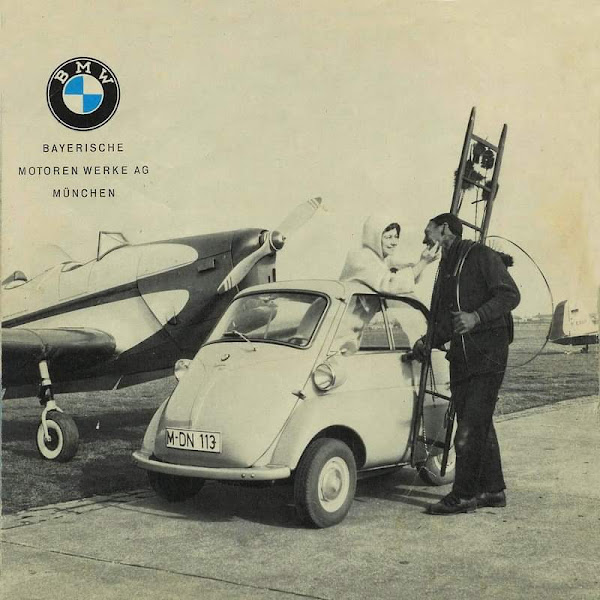 Bayerische Motoren Werke - better known as BMW - was originally founded as an aircraft engine manufacturer in Munich in 1910. The company went through several structural and naming changes until it settled on BMW in 1922. Following Germany's defeat in the Great War (1914-18) and the banning of aircraft manufacture under the Versailles Treaty of 1919, BMW were forced to seek alternative products, such as motorcycle engines, farm tools and household goods in order to stay afloat. In 1923 they built their first motorcycle and this was to become a major business for the company going forward. 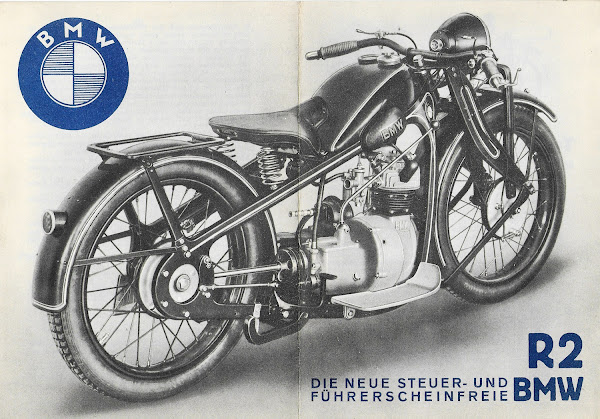 In 1928, BMW purchased the struggling Dixi automobile company of Eisenach. Dixi had built large, conventional cars of their own design in the early 1920s but as the economy turned had subsequently obtained a license to build the British Austin Seven budget car. BMW managed to weather the storm and by the early 1930s had substantially improved the budget Dixi, transforming it into a desirable sports car, even selling a manufacturing license to the British Fraser-Nash company. 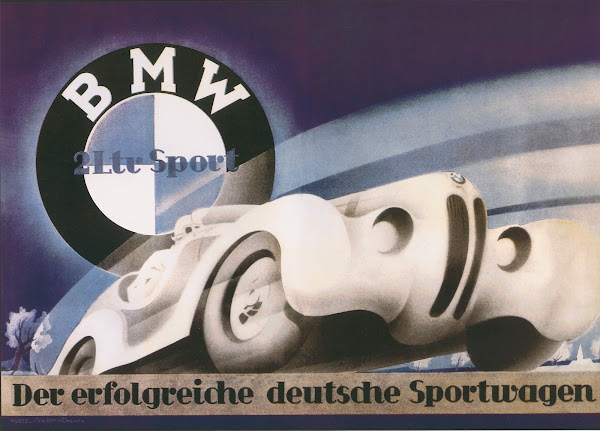 BMW car manufacture stopped during the Second World War, focusing on aircraft engines and motorcycles for the army. As war industries, their factories in Munich and Eisenach were badly bombed and in 1945, the BMW Eisenach plant found itself in the Soviet Occupation Zone of East Germany. 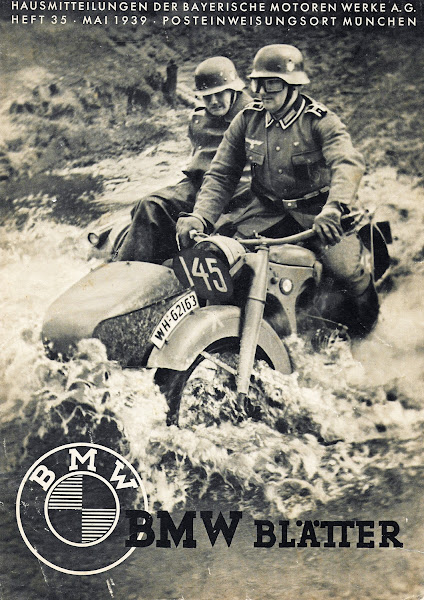 Under the terms of the occupation, all war industries were to be stripped as reparations and liquidated, however, the factory management at Eisenach presented Soviet Marshall Zhukov with a BMW 326 sportscar and motorcycle during an inspection tour of the plant. Zhukov recognized that an operational BMW plant was worth more it export potential than it would be in scrap and machinery value. He signed an executive order placing BMW under an 'autowehlo' state-owned enterprise and encouraged the factory to immediately restart production. 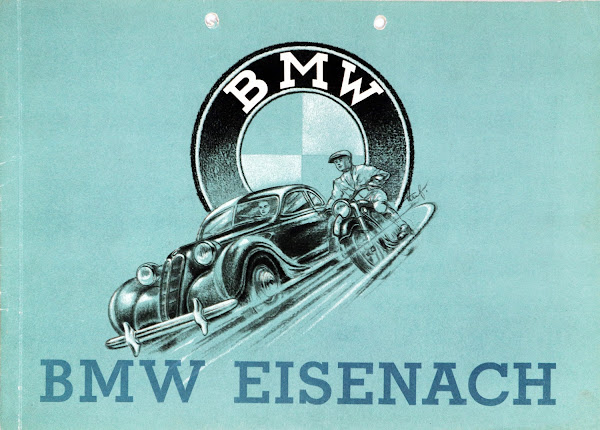 Between 1946 and 1952, BMW's Eisenach plant manufactured BMW cars and motorcycles in small numbers (there were massive shortages of steel, machinery and specialist parts across Europe) which were exported to Scandinavia and other European countries. BMW in Munich, which had primarily been the aero engine plant, maintained close ties with Eisenach, despite growing political tensions. BMW Munich hoped, as did many in Germany, that their assets in the East would be returned upon German reunification. They were to be disappointed.

In March 1952, the Soviet Foreign Ministry wrote to the West German government and the three other occupying powers, USA, Britain and France, proposing that the occupation regimes be terminated, that Germany be reunited as a single state, occuping military forces be withdrawn, free national elections be held and a final peace treaty with Germany be signed. The two German governments, Britain, France and the US, and Germany's neighbours were invited to attend a conference to work through the details. Britain and the US however, refused to withdraw their troops and the West German government, beholden to its sponsors, turned down negotiations. The two Germanies were now set on a path of mutual antagonism as the front-line of an escalating Cold War. 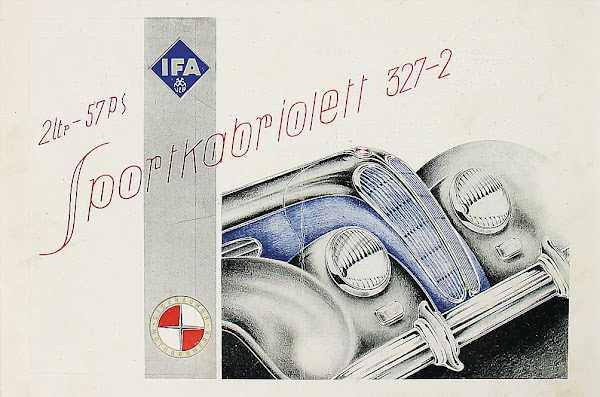 Although there had been tensions between East and West Germany since the late 1940s, trade and exchange still continued. That was now to cease. BMW Munich attempted to recover its Eisenach plants in West German courts, then when that failed, raised patent and branding claims against Eisenach, which cut off the export of all BMW Eisenach cars and motorcycles to western markets. The East German government responded by formally nationalizing the Eisenach plant and rebadging the company EMW. This put paid to the BMW claim, but the writing was on the wall for EMW. EMW motorcycle production stopped and the auto plant was redirected to the manufacturing the IFA (formerly DKW) F9 budget car for the domestic East German market. 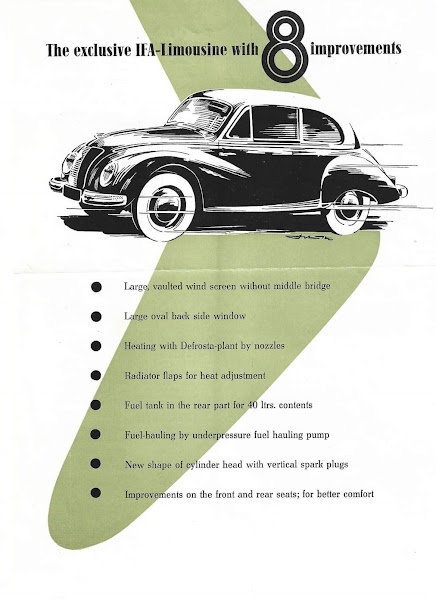 BMW Munich was not an automobile or motorcycle plant and so had to restart production from scratch. From 1948 they began assembling parts and plans from dealers and service offices and reverse engineering designs from pre-war motorcycles in the trizone (the three western occupation zones). Some workers from Eisenach who had fled to the west also bought with them copies of plans. The first post-war BMW Munich motorcycles began rolling of the production line in 1949. 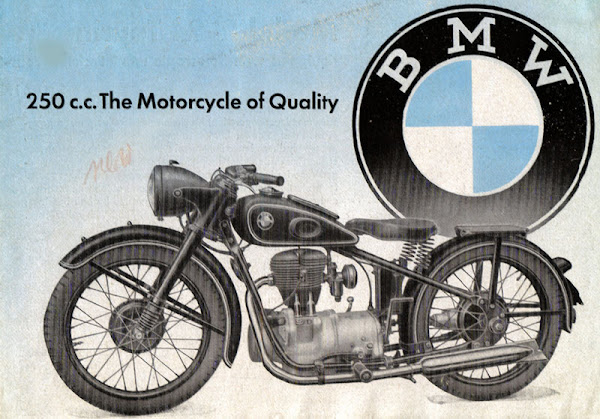 BMW Munich's automotive division was largely comprised of middle-level sales managers with little experience in plant management and manufacturing, so when the company turned to restarting car production, their instinct was to go large and expensive. Munich's first post-war car was the luxurious BMW 501, powered by BMW's prewar six-cylinder 2 litre engine - the same engine that was used in the Eisenach built BMW/EMW 340-2. The car however was over-weight so a 2.4 litre V8 engine was substituted in 1954. 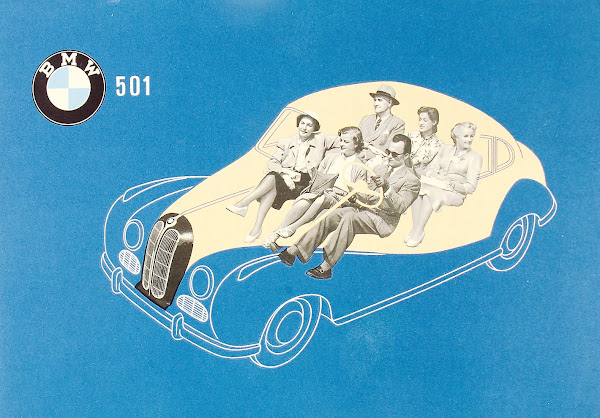 The BMW 501 and 502 were in no way suitable vehicles for their time and sales of these two bohemouths were slow. In addition, due to their build cost, BMW lost money on every car they sold. The State of Bavaria stepped in to buy BMW 502s as police vehicles simply to throw the company a lifeline to stay afloat.

There was no way BMW engineers could develop a budget car suitable to the market before BMW was bankrupted, but then an opportunity presented itself. ISO Rivolta were a small Italian manufacturer of refridgerators, appliances and scooters and, at the 1954 Geneva Motor Show exhibited their newest development - a small, egg-like bubble car called the Isetta. The car attracted a lot of attention - and a lot of orders - but ISO were only a small company and would not have been able to meet demand. They were keen to seek manufacturing partners. BMW representatives saw the opportunity and organised a license to manufacture the Isetta in Germany (Velam manufactured the Isetta in the French market). 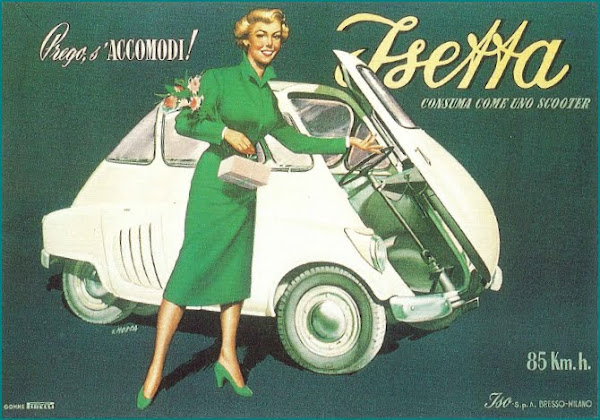 The BMW Isetta went on sale in 1955 and was an instant hit in Germany and across Europe. It was a stroke of good fortune for BMW as motorcycle sales across Europe went into terminal decline from 1956. Isetta sales managed to fill that gap and helped the company stave off bankruptcy. Overall some 160,000 BMW Isettas were built from 1955 until the model was retired in 1962. 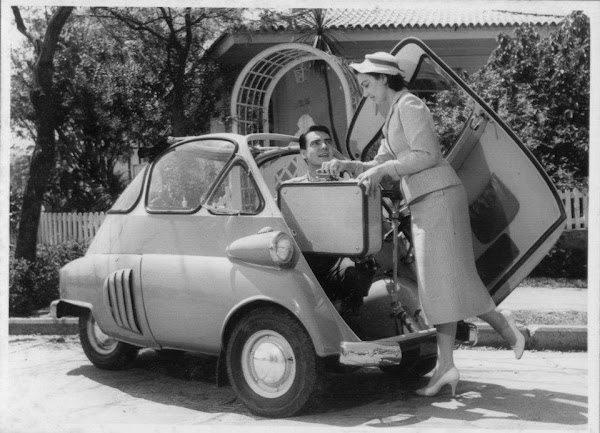 BMW continued to stumble along on the verge of bankruptcy up until 1962 when a completely new range of cars, the BMW 'Neue Klasse' were released. It was the New Class models that ultimately saved the company. 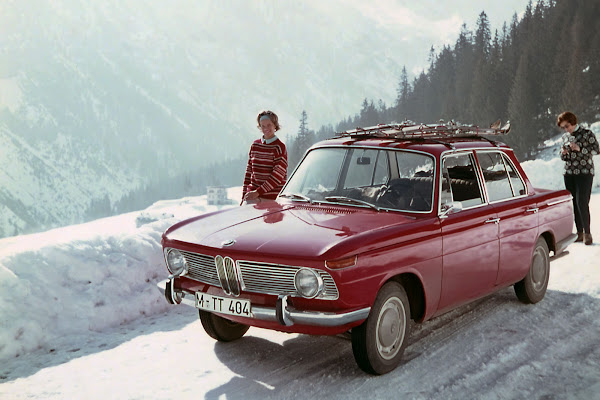 But that's another story....

Email ThisBlogThis!Share to TwitterShare to FacebookShare to Pinterest
Labels: BMW