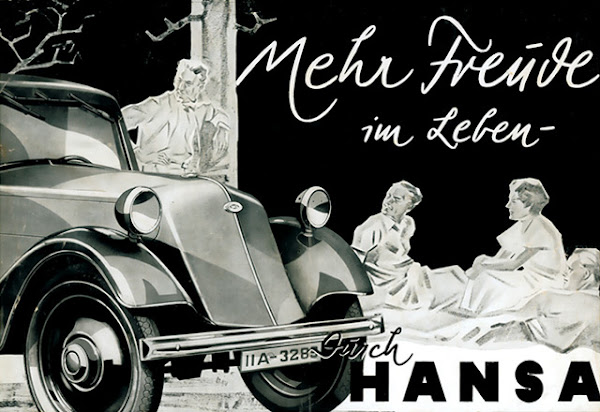 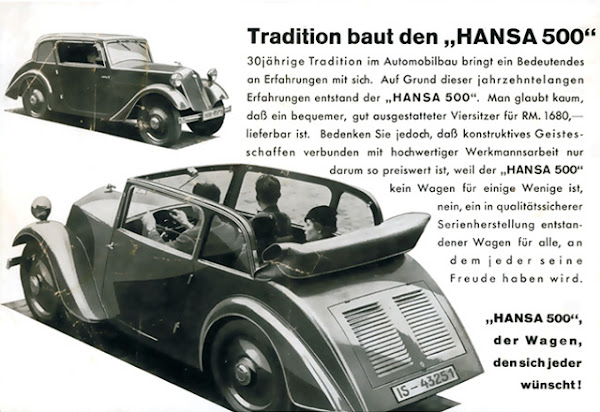 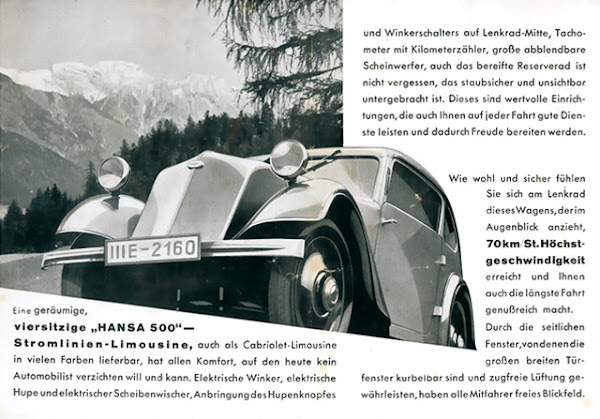 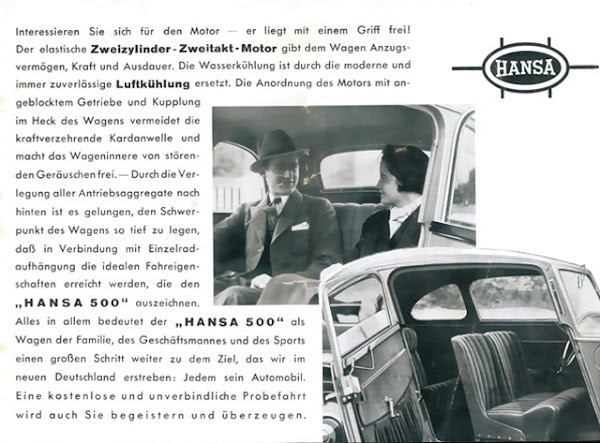 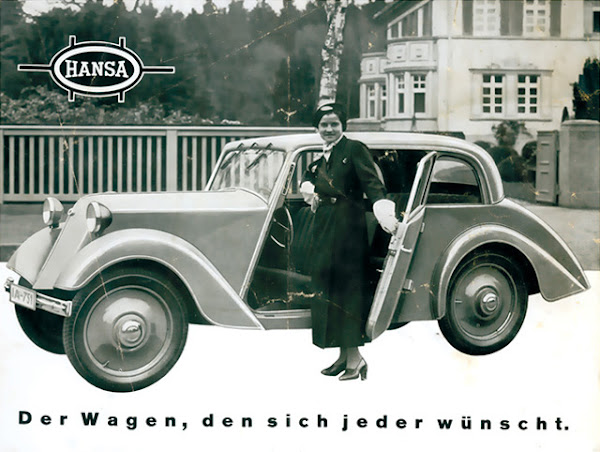 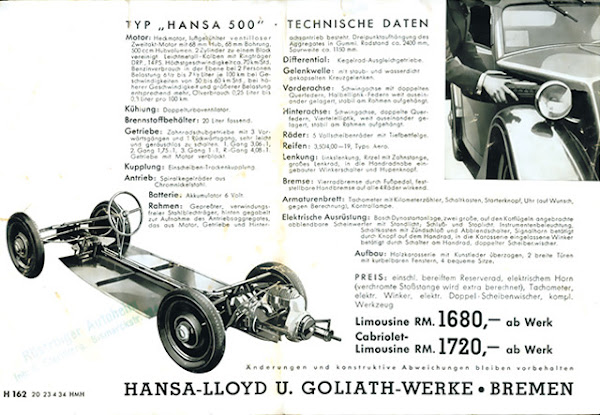 Hansa 500 - The car everyone wants

A 30-year tradition in automobile construction brings with it a great deal of experience. Based on these decades of experience, the "Hansa 500" was created. A comfortable, well-equipped four-seater for RM 1680 – so inexpensive because the "Hansa 500" is not a car for the few, but a high-quality-assured series-produced car for everyone to enjoy.
Hansa 500 the car that everyone wins!

A spacious four-seater, the "Hansa 500" is available as a cabriolet limousine in many colors, offering all the comfort that no automobile enthusiast can or will want to do without today. Electric blinkers, electric horn and electric windshield wipers, with the horn button and indicator switch conveniently mounted on the centre of the steering wheel. Speedometer with odometer, large dimmable headlights and not to forget, the spare wheel and tires, stored in a dust-proof and invisible compartment. These are valuable features that will serve you well on every journey and bring you driving pleasure.

How comfortable and safe you feel behind the steering wheel of this car, which draws in your eye. With a top speed of 70 km per hour, even the longest drive is enjoyable. Through the side windows, from which the large, vent windows can be swivelled around to ensure draft-free ventilation, all passengers have a clear field of vision.

Are you interested in the engine? It is exposed with one hand! The flexible two-cylinder two-stroke engine gives the car traction, strength and endurance. Water cooling has been replaced by the modern and always reliable air cooling. The direct connection of the engine with the gearbox and drive unit placed at the rear, minimizes power loss through the cardan shaft and frees the inside of the car from disturbances and noise. By relocating all drive units to the rear, it has been possible to set the centre of gravity of the car low so that, in conjunction with the four when independent wheel suspension, the ideal driving characteristics that characterize the "Hansa 500" are achieved. All in all, the "Hansa 500" is a car for the family, for the businessman and for the sportsman and is a big step towards the goal that we are striving for in the new Germany: a car for everyone.

A free and non-binding test drive will inspire and convince you.

More joy in life with Hansa!


The 'people's car' concept was pursued by dozens of companies and engineers in Germany during the late 1920s and early 30s. Thanks to the promotional efforts of Dutch author, Paul Schilperoord, Josef Ganz' work in this sphere has been elevated above those of other pioneering and talented engineers. Ganz' Standard Superior of 1933 is now presented as the precursor and inspiration of the Volkswagen Beetle. Superficially, the Standard Superior looks similar to the later Volkswagen, but that does not mean anything. Interestingly, another rear engined 'people's car' also went on sale in 1933, but that car is never proposed as a Volkswagen precursor, despite it being virtually identical to the Standard Superior in concept and layout. This was Carl Borgward's Hansa 500. 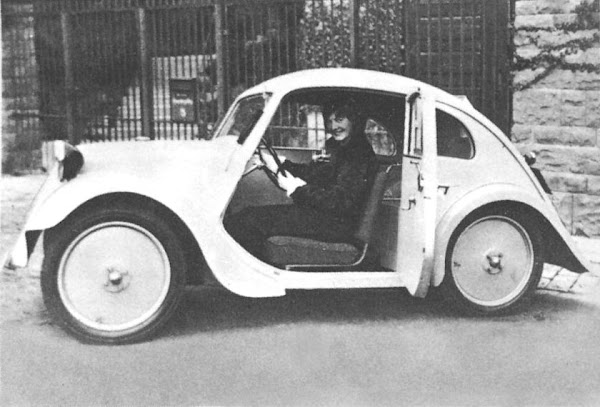 Carl Borgward was a pioneering auto engineer from Hamburg, Germany. He started manufacturing exhausts, radiators and fittings. In the late 1920s he developed a simple motorized cart for use within his factory. The Blitzkarren 'fast cart' was never intended for public sale, but Borgward received so many requests from other industrialists that he decided to build a version for public sale. It would become an overnight success. In 1931 Borgward introduced a new three-wheeled passenger car based on the delivery cart called the Pionier (Pioneer). Demand for cheap motoring was such that more than 4000 Pioneers were sold. 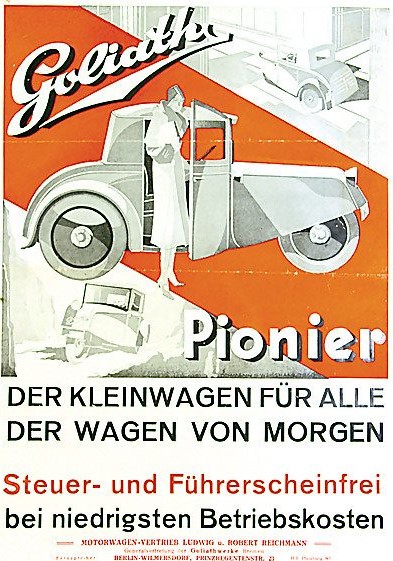 The success of the Goliath Pioneer and commercial tricycles allowed Borgward to weather the depression years and he capitalized on the harsh economic times to pick up the bankrupt Hansa company. Hansa had a reputation as a quality automotive concern but their heavy and expensive cars found no market in the early 1930s. Borgward tasked the engineers at Hansa to develop a cheap, modern car based on the Pioneer. The result was the Hansa 500.

Apart from the obvious addition of a fourth wheel, the Hansa 500 was very similar to the Pioneer. The car had a simple ladder chassis, but rigidity was provided by a steel floor. A two cylinder, air-cooled two-stroke engine of 400 or 500cc was mounted far in the rear. A flywheel mounted fan blew cooling air across the cooling fins of the engine. The car had independent suspension on all four wheels, which gave it excellent handling. Unlike the Standard Superior with its very spartan fittings, the Hansa 500 was noted for the quality of its fittings. This helped make the Hansa a better selling car than the Standard Superior.

Like the Standard Superior, the Hansa 500 was only on sale for a few years. By 1935 Germany's economy had recovered and the demand for 'kleinstwagens' (very small cars) had evaporated. Hansa replaced the 500 with bigger and better cars like the 1100 and 1700. Hansa would continue building cars until the 1938 Schell Plan rationalized the German motoring industry. Carl Borgward's group of companies - Goliath, Hansa and Borgward - were directed to cease civilian car production and concentrate on trucks and commercials. 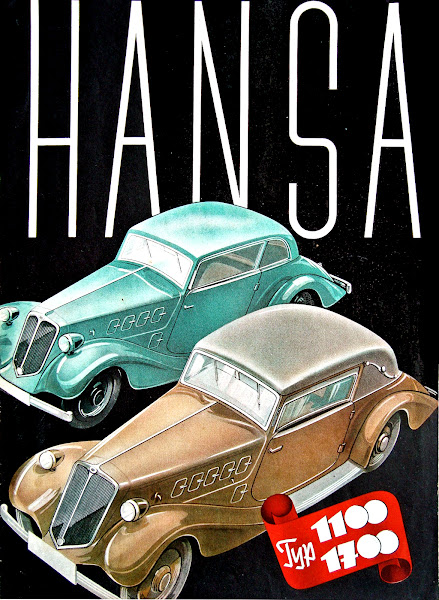 The story of the Standard Superior - https://heinkelscooter.blogspot.com/2015/07/standard-superior.html

Posted by Paul Markham at 7:42 PM No comments: