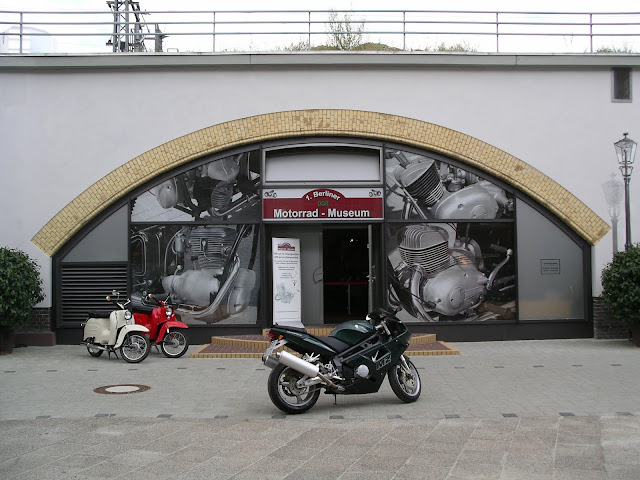 One of my 'must see' destinations in Berlin was the East German Motorcycle Museum. It is situated on metro line between Hackescher Market and Alexanderplatz, near the TV tower. It's directly under the rail line in fact. The museum displays a large collection of MZ and Simson motorcycles with a small collection of IWLs, IFAs and Trabant cars. The collection was attractively displayed, but the cramped location under the arcades of the railway line meant many bikes were crammed quite close together making them difficult to photograph. It was a good museum though and I spent around an hour there taking photos of virtually everything. 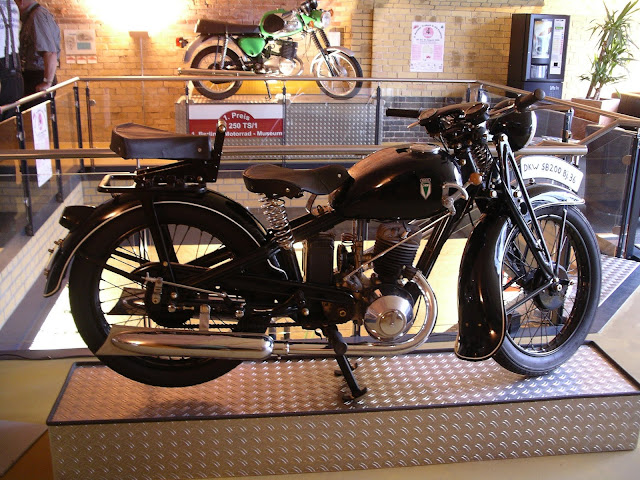 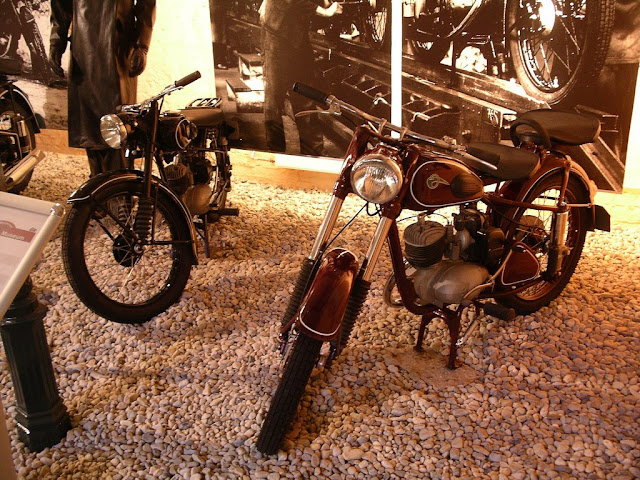 In the immediate aftermath of the war IFA began assembling the famous pre-war DKW RT125s from left over parts and spares. From this humble beginning Motorrad Zchopau (MZ) was reborn from the ashes of DKW. Although first built in the 1930s, the MZ RT125 remained a popular selling motorbike well into the 1950s. For contemporary advertising and history, see here:
https://dkwautounionproject.blogspot.com/2019/04/1949-ifa-rt1251-brochure.html 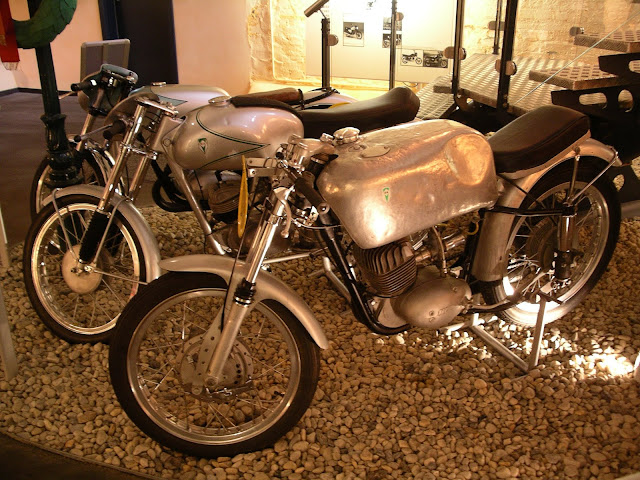 A pair of IFA racing motorcycles. IFA, as the East German DKW factory was originally designated, quickly picked up where DKW's pre-war racing team left off. IFA motorcycles was soon renamed MZ and went on to make its name in European racing circuits. 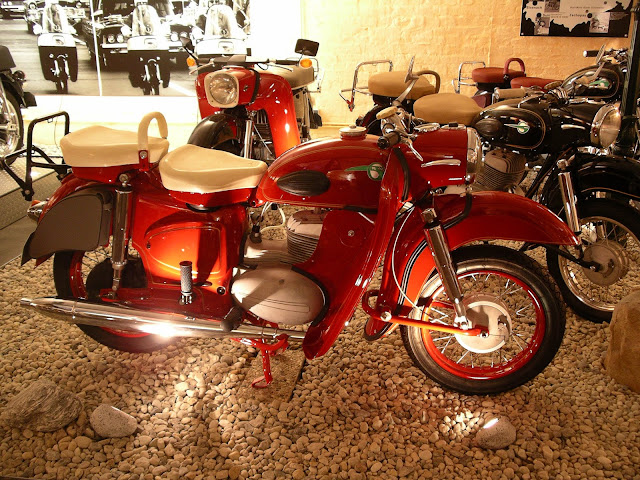 A beautiful 1956 MZ 250. No longer just an East German DKW, MZ is beginning to evolve its own look. 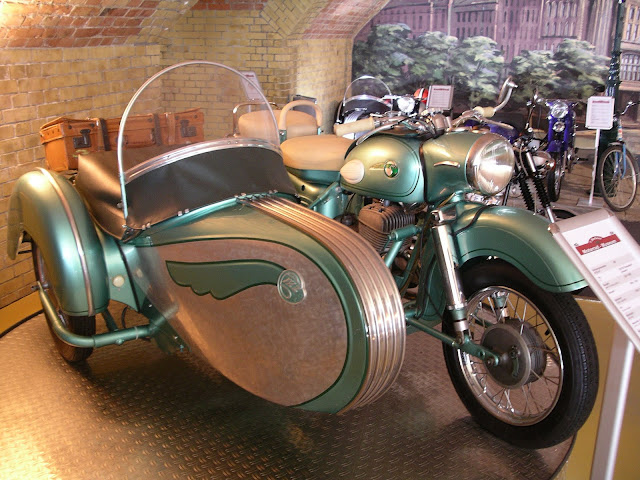 Another beautiful MZ 250 with a Stieb sidecar. Stieb also found themselves on the wrong side of the east/west divide but they managed to retain an export market to the west and their popular and stylish sidecars were found attached to many German motorcycles and scooters. 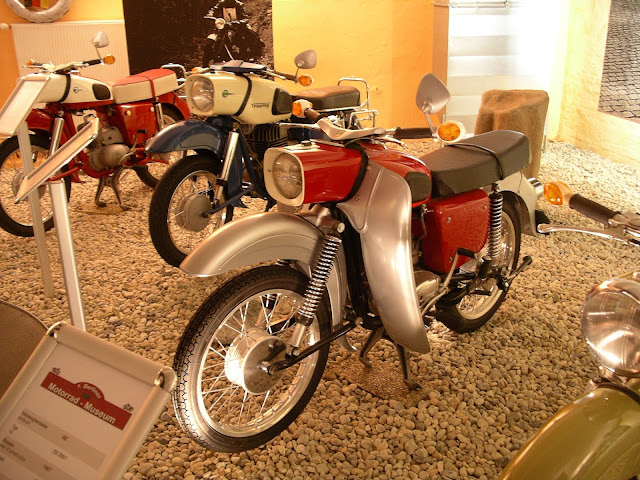 By the 1960s MZ had taken on their distinctive look. These are a range of ES and ET models which had engines ranging from 125 to 250cc. 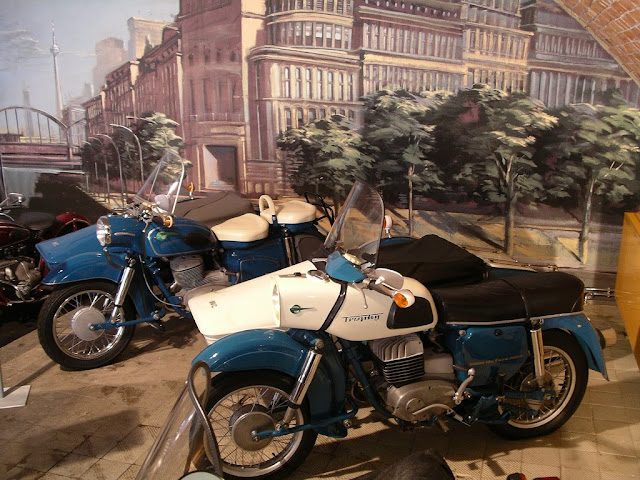 Das eisen schwein - the Iron Pig. The MZ Trophy was built for export and was a popular seller across Europe The Trophy was pretty much East Germany's answer to the Japanese invasion. They were basic machines, very cheap when new, relatively reliable and unkillable. Behind the Trophy is another beautiful 1950s model for stylistic comparison. 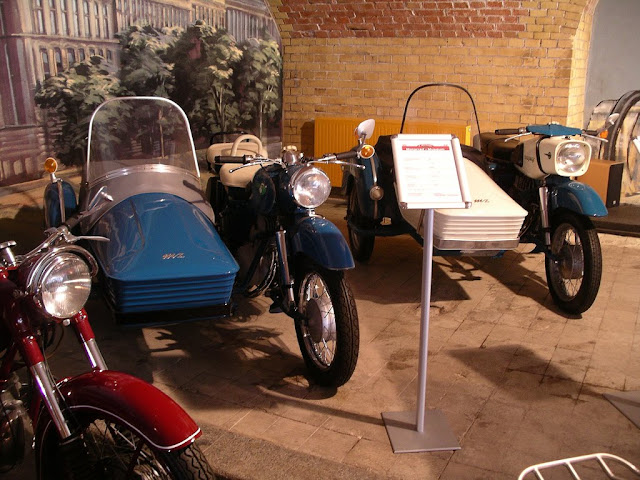 MZ began manufacturing their own sidecars in the 1960s. 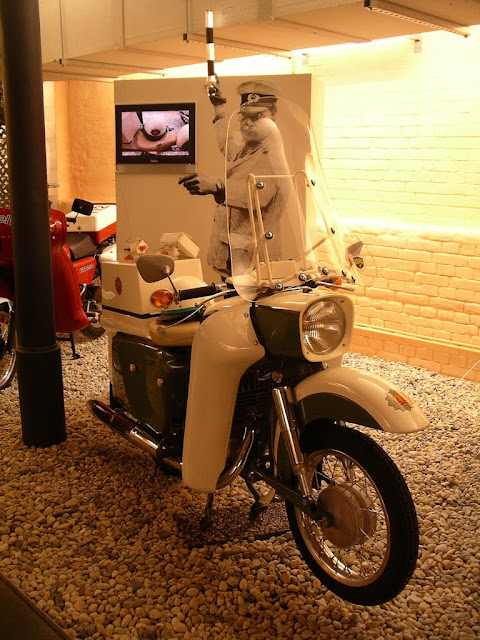 MZs were used by the East German police 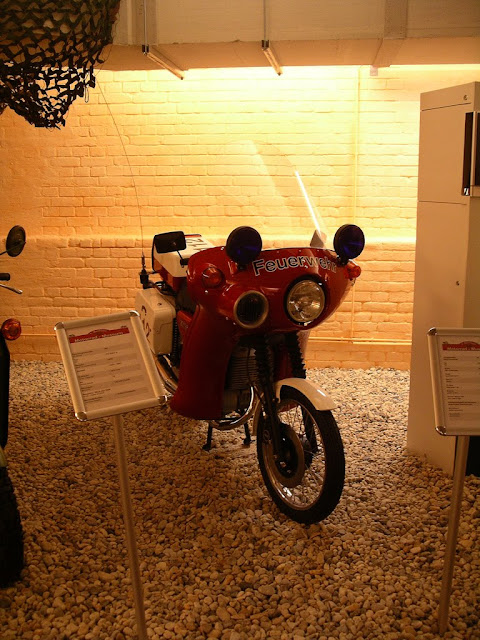 And by the fire department. 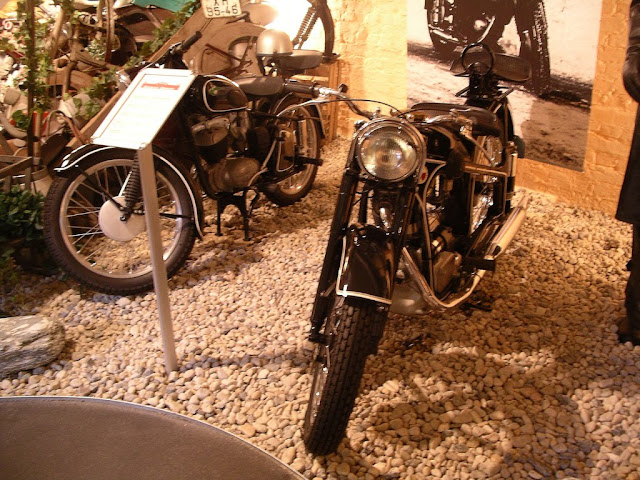 East Germany inherited more than just DKW motorcycles. This is a EMW R35 built by Eisenach Motorwerkes based on the pre-war BMW R35. VEB stopped production of Eisenach motorcycles in 1953 in favour of MZ motorcycles. Eisenach went on to produce the Wartburg car from 1956 to the 1990s. 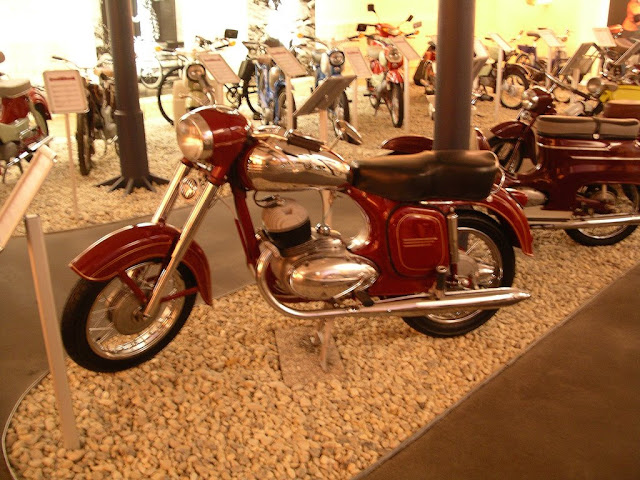 Not all motorcycles were German. This is a Czechoslovakian Jawa. Jawa's two strokes were based on DKW technology. 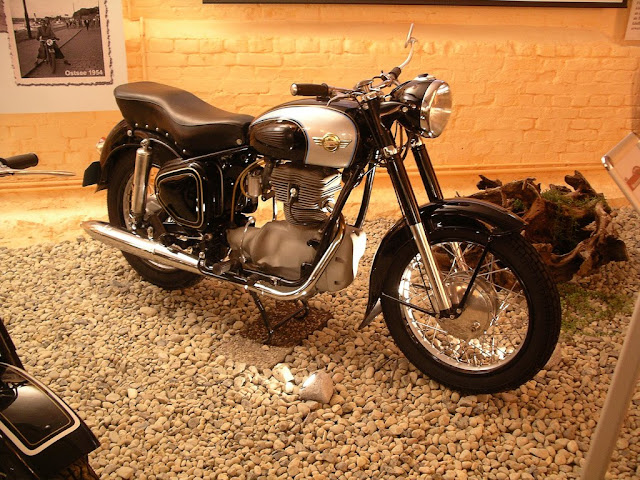 Simson-Suhl started manufacturing motorcycles in the 1920s. In 1948 they produced the AWO 425. The name refers to the four stroke engine of 250ccs. It was a popular but short lived machine as VEB stopped production in favour of MZ motorcycles when they re-organised the auto industry. 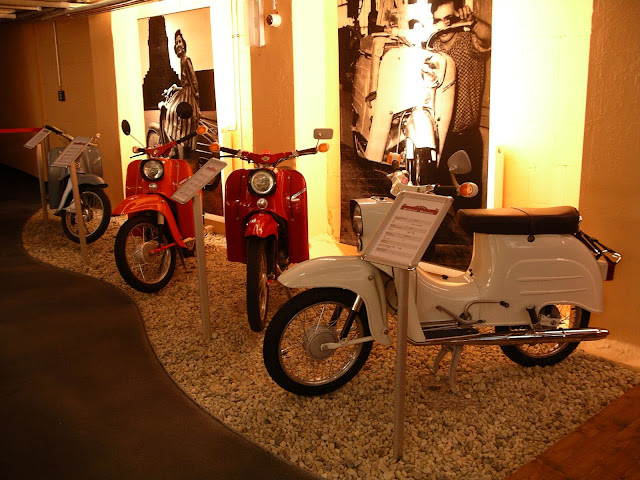 VEB assigned Simson the market for 50cc mopeds. The ubiquitous Simson Schwabe (Swallow) was probably their most popular machine. These lovely little mopeds were built from the 1950s to the 1980s. There were plenty of them on the streets in Berlin, Dresden and points east (even saw three in the far western university town of Aachen). 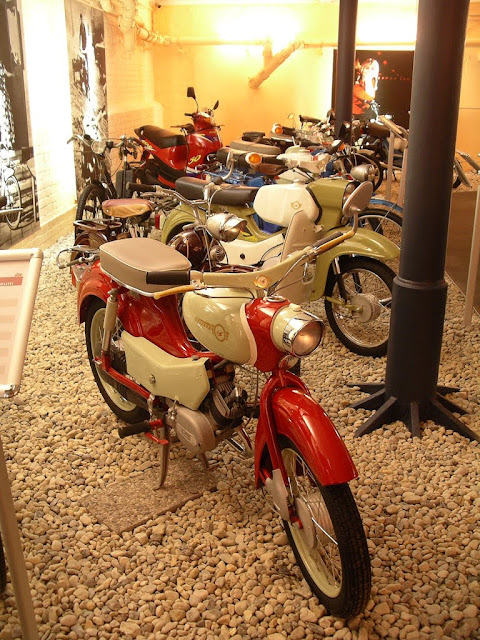 A large collection of Simson mopeds. Simson were a long time in production and released a wide range of machines, from powered bicycles to 50cc 'sports' bikes. 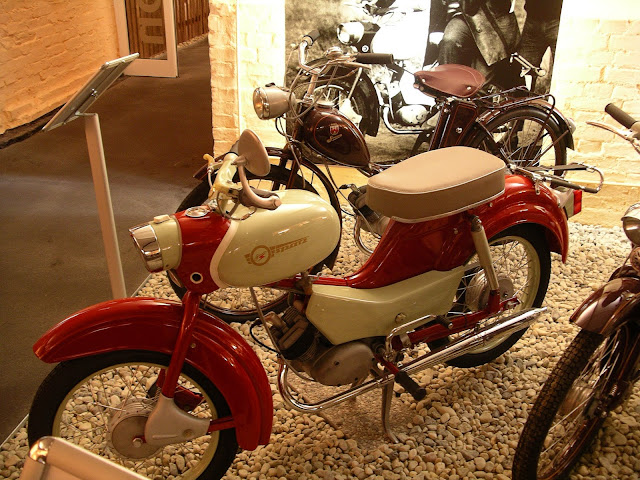 A Simson Spatz with a Simson SR-2 moped behind. 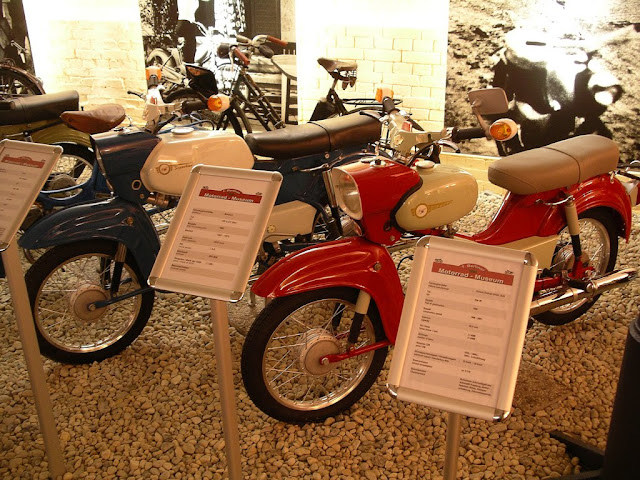 A Simson Star and Simson Spatz. This later model has the ubiquitous square headlamp like the MZ Trophy and IWL Troll. 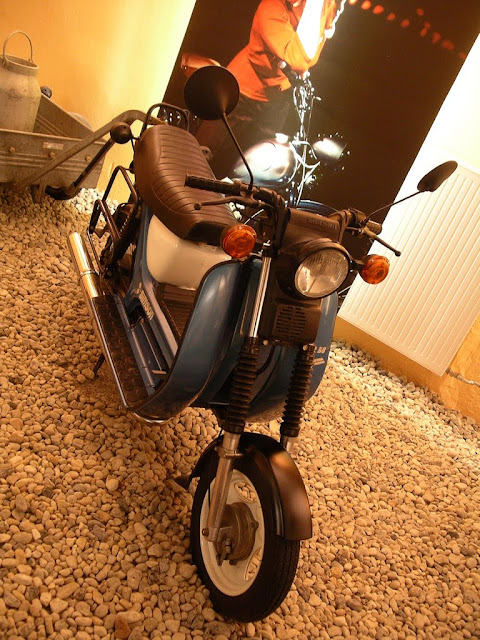 A modern Simson scooter. Unlike the rest of VEB, Simson survived the fall of Communism. They continue to manufacture a small range of motorcycles and scooters as well as spare parts for many of their more popular oldtimers. http://www.simson.de/ 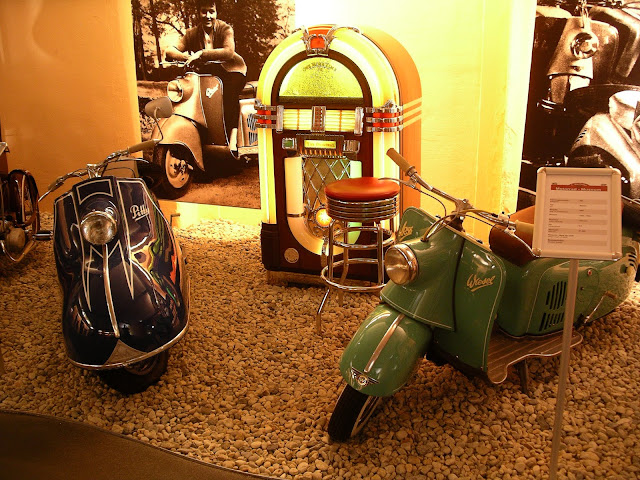 IWL were originally a manufacturer of BMW aero engines. The factory was badly bombed during the war and then completely stripped of all remaining assets by the Soviets as part of war reparations. The factory struggled back into existence building kitchenware and farming equipment, but in 1954 VEB assigned them a contract to build motor scooters. IWL did not build the engine but were assigned the DKW/MZ RT 125cc engine as their powerplant. Their first scooter, the Pitty (left) was heavy and underpowered. It was in production only two years before it was replaced by the lighter, more conventional Wiesel (right). 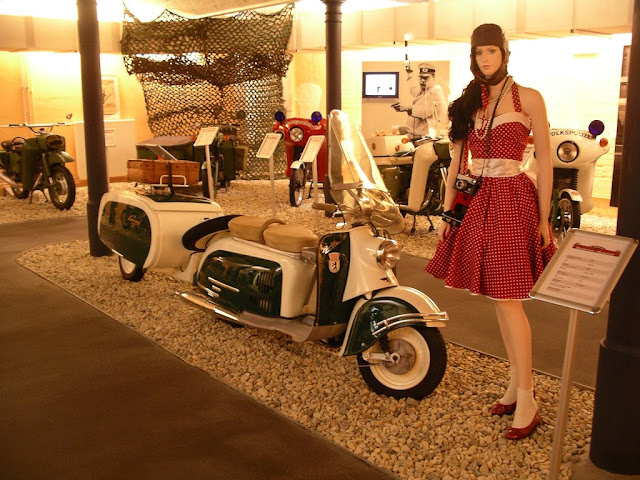 The lovely IWL Berlin and Campi trailer. This was IWL's most successful machine, selling over 160,000 units. 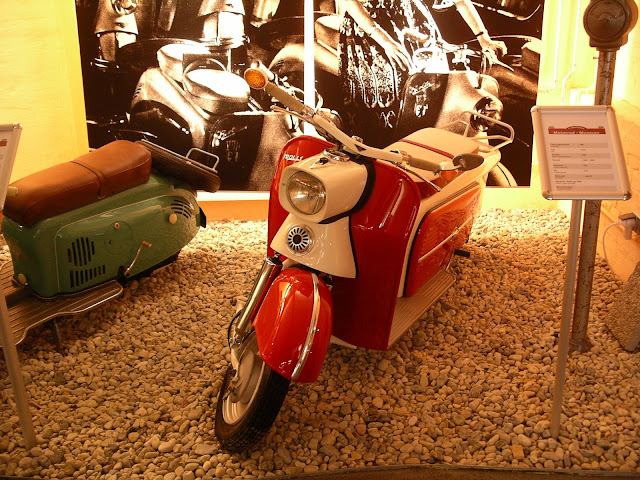 The IWL Troll's styling was clearly influenced by MZ, which had become more deeply involved with IWL by 1963. In 1964 MZ completely took over manufacture of the Troll but stopped production the next year. 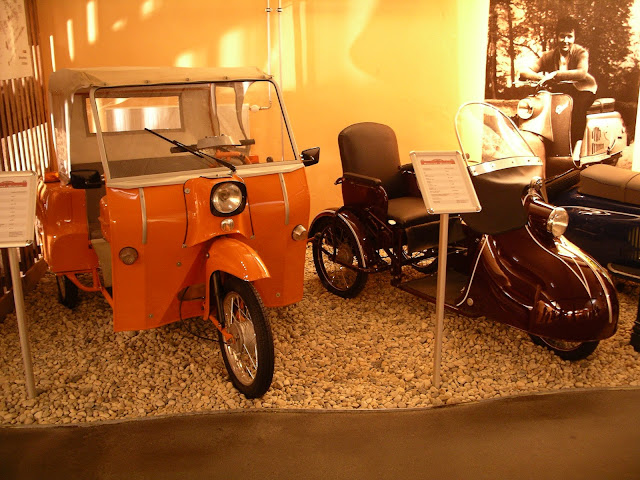 Some of the oddies of the collection. The Simson Duo was effectively a three wheeled 'micro-car.' The Krauz-Piccolo Trumpf was a three wheeled invalid carriage built out of surplus IWL Pitty components with a 50cc Simson moped engine. 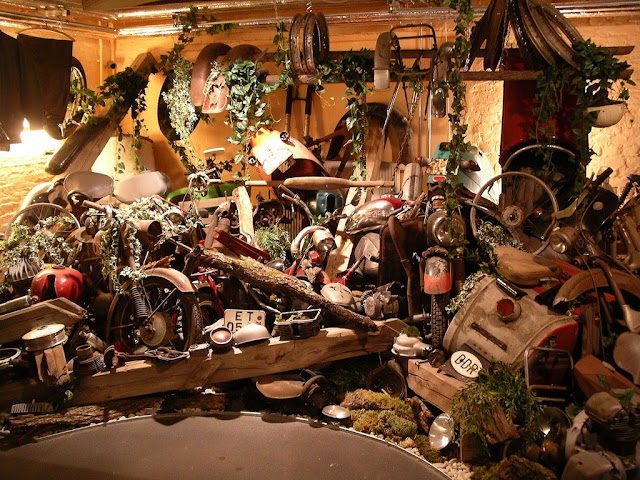 The museum featured an interesting 'barn-find' display. This is how many old bikes are found - rusting, scattered in pieces. 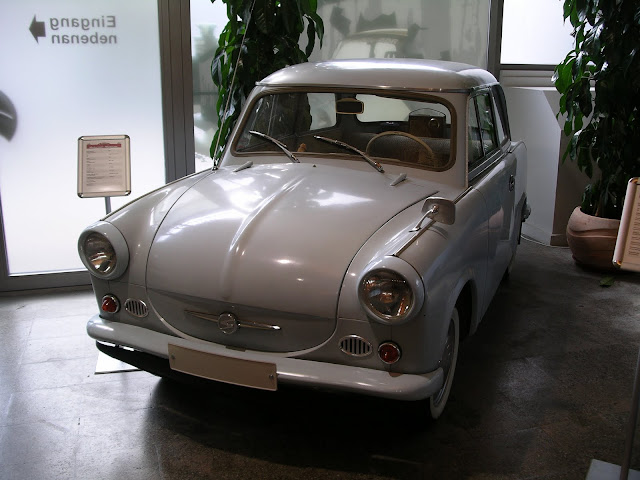 The Sachsenring P-50 was the first Trabant. For the Trabant story, see here: https://dkwautounionproject.blogspot.com/2017/07/trabant-east-german-peoples-car.html 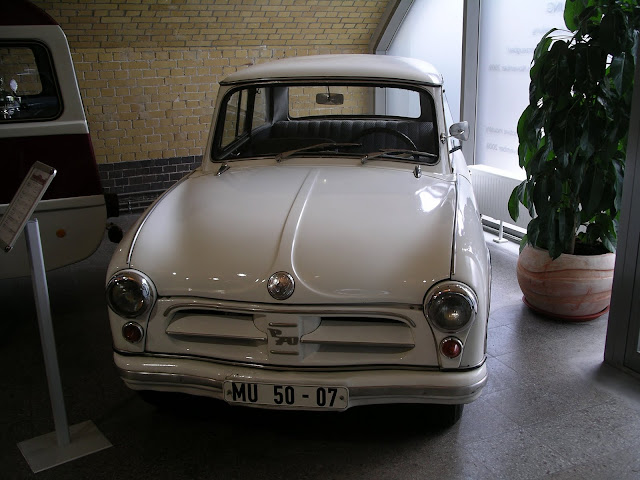 The AWZ P-70 was the progenitor of the the Trabant. These were an attempt to modernize the IFA F8, which was a post-war update of the pre-war DKW F8. The F8's engine and chassis were unchanged by a new, modern style body constructed out of Duraplast was laid on top. The later Trabant was a completely new design using some of the techniques pioneered on the AWZ P-70.
https://dkwautounionproject.blogspot.com/2018/04/1955-awz-p70-prospekt.html

The museum is located here: 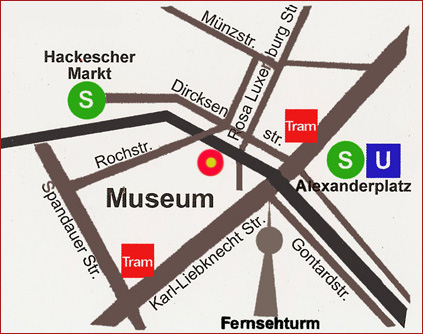 Here is a link to another review of the museum -http://www.helmethairblog.com/entries/review-of-berlin-motorcycle-museum/
Posted by Paul Markham at 2:37 PM