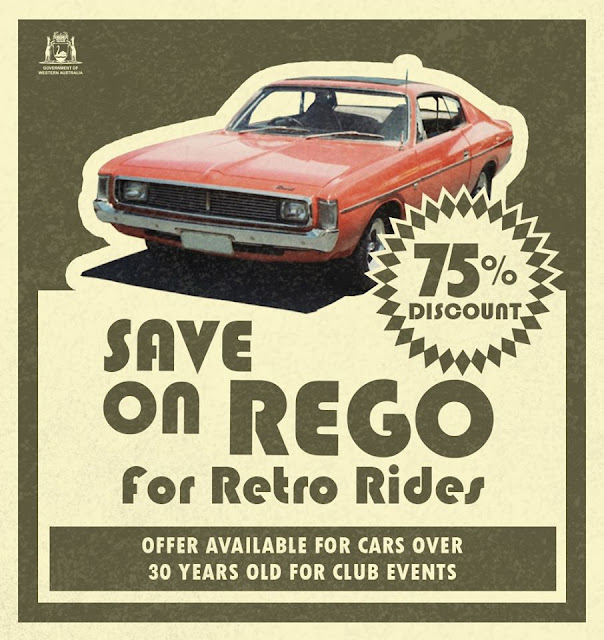 
Motoring enthusiast clubs play a big role in local communities across our State. We all know West Aussies love their classic cars and bikes, but our motoring enthusiasts also attend cruises, exhibitions and events that often attract tourists or raise funds for charities.

But our current licensing scheme can be a big barrier for people looking to restore old vehicles to participate in our motoring clubs. Classic car owners are also currently prevented from accessing registration concessions if modifications – even safety improvements – have been made to their vehicles. That's why we're introducing "Concessions for Classics" - offering a 75% discount on registration and slashing red tape. Under our plan, all car and motorcycle enthusiasts with a vehicle older than 30 years - that are also registered to a Department of Transport approved club - will be eligible for the 75 per cent registration concession. This will help bring classic cars across WA out of the shed and help their owners enjoy and make the most of them.

Drafting is proceeding as quickly as possible with the aim of having the new scheme in place in the second half of 2020. In the meantime, we will be working with owners and clubs to finalise the plan and make sure we get it right.

Rita Saffioti also posted a similar message on her Facebook page and followed up with a media release with more information. 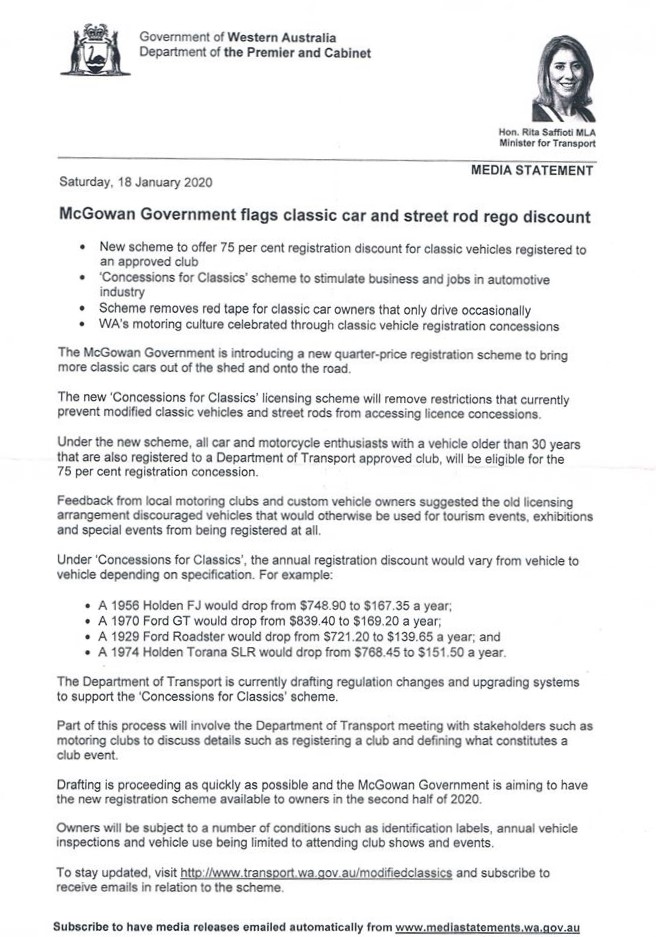 The genesis of this announcement began many years before when several individuals associated with the Street Rod and modified vehicle movement began to lobby the government to introduce a fairer licensing scheme for modified vehicles. While there is an existing concession for vehicles preserved in original specification, called Code 404, the originality requirements of Code 404 meant it was unsuitable for modified vehicles. Code 404 places restrictions on vehicle usage and requires owners to be a member of registered club. The club and the overarching Council of Motoring Club police and administer the scheme on behalf of Dept of Transport.

There was no intention on the part of the individuals approaching government to emulate Code 404 and several different proposals were put forward by various stakeholders for consideration. Similar interstate schemes were also proposed as potential models. At some point a proposal for '90 dollars for 90 days' gained public traction and an online petition gained many thousands of endorsements.

A concessional licensing scheme for modified vehicles is a good idea, and it does not simply apply to Street Machines, Hot-Rods or similar vehicles. It can also be beneficial to owners who seek to maintain vehicle originality, but who are forced by either lack of suitable parts, or for reasons of  vehicle safety, have been forced to use alternative, non-original parts. As an illustration, when the Ariel Leader was released in 1958 it came in for criticism for the poor quality of its front-brake. Ariel made two modifications to the brakes, neither of which really improved the brakes' performance. It was left to owners to make their own adjustments and improvements and the front brake is the number one topic in Leader owner's forums. The brakes can be made safe for modern road driving with a number of small modifications. However, this could be regarded as a modification from original specification depending on how strict the inspector is. The new concessional scheme would allow owners to make further improvements to the bikes' brakes without fear that the bike would lose its concession. 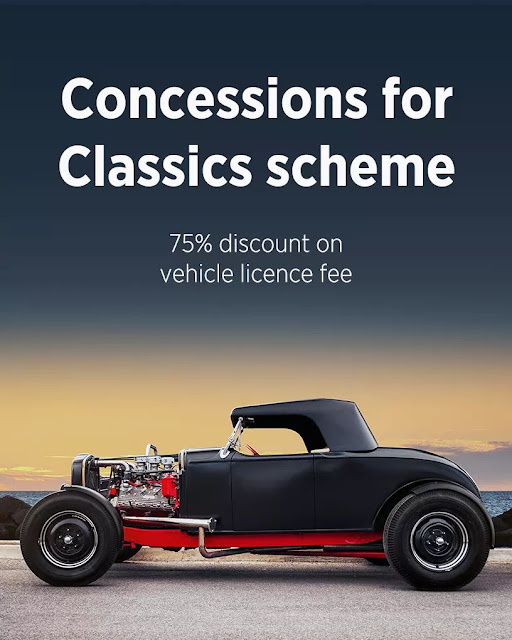 The key conditions included in the announcement are:
These terms are similar to the Code 404 in WA and in all other similar schemes in all of the other states. However, these conditions elicited a hysterical reaction from many in the modified community. The negative reaction and outrageous and abusive comments on Mark McGowan and Rita Saffioti's Facebook page have done much damage to the community as a whole.

The objections to the proposed framework revolve around misunderstandings and outright ignorance about how the interstate schemes actually work. To obtain a concession, some administration performed by the Dept of Transport must inevitably be handed over, and this is usually where the club comes into play, ensuring that members are not abusing the scheme. This includes ensuring that vehicle is not general use.

The vocal objectors, expressed in their own words, vehemently oppose any form of oversight - they don't want to answer to a club, or conform to limited use rules and restrictions. They are also opposed to their vehicles being inspected. On their evidence of their own words, these individuals would abuse any concession offered them under the scheme.

The vocal objectors have a very loud (and incoherent) voice online but there are many other groups and individuals working with the Department of Transport to help shape this scheme into something workable. We expect it will take nine or so months to work through the details. 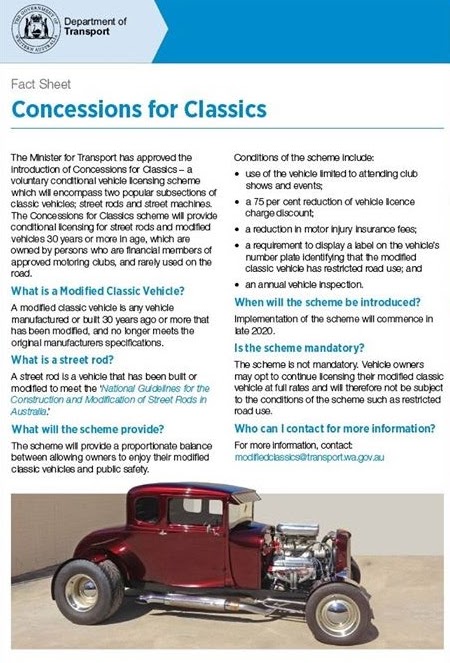 Since the Minister for Transport, Rita Saffioti announced the Concessions for Classics (C4C) scheme – a voluntary conditional licensing scheme which will be available to eligible modified classic vehicles 30 years or more in age, including street rod vehicles – earlier this year, we have made good progress towards finalizing the policy settings required to introduce the scheme. The Department of Transport (DoT) has met with several representatives from a variety of stakeholder groups and listened to feedback from individuals. All feedback and suggestions are being considered in the development of the final C4C policy to support the required regulatory amendments.

To enable DoT to analyze and summarize the feedback received – with a view of gaining the Minister’s approval of the recommendations that will be made – the opportunity to provide suggestions will soon close.

We welcome you to provide comments via modifiedclassics@transport.wa.gov.au and advise that the opportunity to send through suggestions and feedback will close on 20 March 2020.

Over the past two months we have had many questions relating to certain aspects of the scheme and the below provides information relating to those asked most frequently.

Club membership
The requirement for classic vehicle owners to be a financial member of an approved motoring club is a fundamental feature of all classic vehicle permit and conditional licensing schemes across Australia. It encourages club members and DoT approved motoring clubs to comply with their obligations under the scheme. It also fosters community involvement and social inclusion.

DoT will have the ability to revoke its approval of an approved motoring club in the event the club fails to comply with its obligations under the scheme, which will place an onus on motoring clubs to monitor inappropriate behaviour/use of vehicles and hold their members accountable. Please note this is a voluntary scheme and the affiliation with a DoT approved car club is only required if you wish to join the scheme.

Club events
DoT is finalising the policy on what constitutes a club event, however as with the vintage/veteran scheme (Code 404), there will be the possibility to use your vehicle to participate in other club sanctioned activities, such as ‘impromptu runs’, provided they meet the conditions of use as set out in DoT’s guidelines and the event is recorded in an approved manner. Please note this is a voluntary scheme and the restricted road use is only in place if you wish to join the scheme.

$90 for 90 days
Of the 2.8 million vehicles currently licensed in Western Australia (WA), many have reduced or limited access to the road network for a number of reasons. The State Government must balance requests such as this with other individuals and special interest groups which may also use vehicles infrequently.

Detailed consideration has been given to the $90 for 90 days scheme using a log book system, along with other potential schemes, and a decision was made prior to the Minister’s announcement to largely mirror the vintage/veteran scheme (Code 404), which has been operating successfully in WA since 1964. Mirroring the Code 404 scheme will enable DoT to implement the scheme later this year without undertaking lengthy policy and costly system changes.

Broadening the parameters of the restricted road use would not be equitable to other WA road users, particularly those who also only use their vehicles in limited circumstances.

404 vs. C4C
The C4C scheme will not replace the Code 404 scheme. As you will note the main difference between this scheme and the Veteran/Vintage (Code 404) scheme is that Code 404 vehicles are unmodified and the new C4C scheme relates to modified classic vehicles. Code 404 vehicles will continue to receive a 100% exemption on vehicle licence charges in recognition of the historical value these vehicles have in the WA community. Vehicles on the C4C scheme will receive a 75% concession on vehicle licence charges, and a significant reduction in motor injury insurance premiums, based on the restricted use these vehicles will have on public roads.

The difference between these two fees is $581.54

If the requirements of the C4C scheme do not suit you, remember it is voluntary scheme designed to provide a balance between the restricted use of a vehicle and the cost of licensing.

Updates on the scheme were announced 6th September 2020 https://heinkelscooter.blogspot.com/2020/09/earlier-this-year-after-many-years-of.html